Home Sections Sports If I Had a Boat 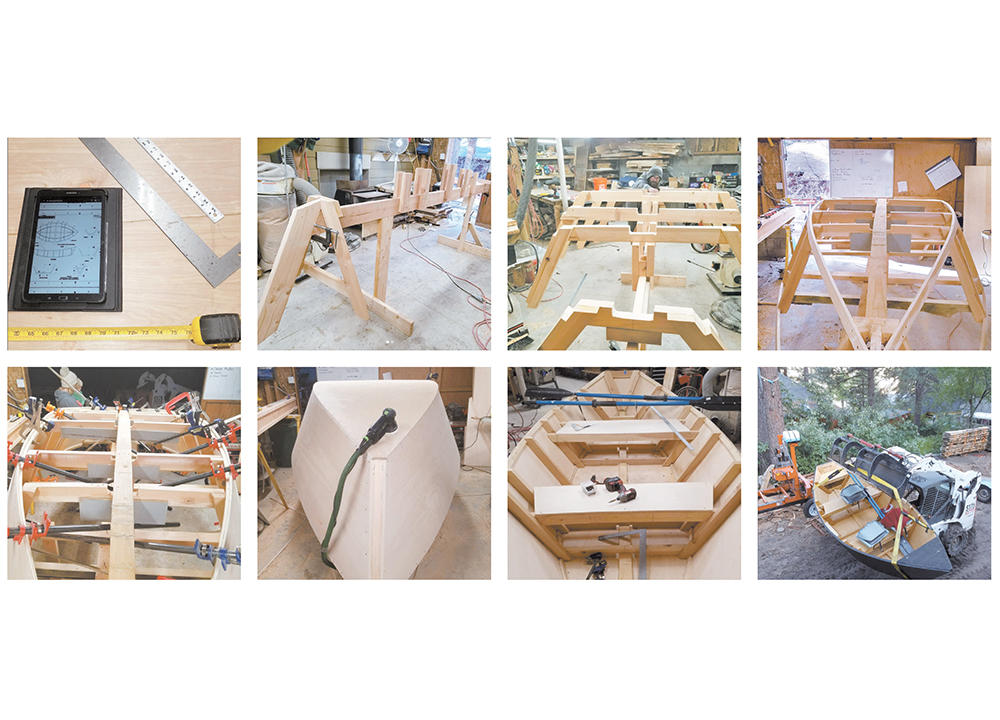 There are few vessels on earth that navigate a river with the lyrical ease of a McKenzie River Drift Boat. In the same way a fallen alder leaf floats effortlessly with the current, suspended as though it has no mass or matter at all, a wooden drift can navigate a rapid as though it were made from the water it rides upon.

Rowing a McKenzie is serenity perfected; the same cannot be said for making one.

This is especially true when the maker has virtually no knowledge of boats or boating to begin with. Floriston resident Tom Loeschner is one of the best carpenters I’ve met. Fusing his welding talents with his woodworking skills, he routinely creates understatedly beautiful pieces of live-edge furniture (See: June, Your Canvas), but when he decided to build a boat, he was embarking into uncharted territory. The waters were a bit rough.

“I love fly fishing,” he said. “I wanted to run rivers and find a boat that I could use in the spring when the rivers are high, but it was really intimidating, in a way, to build a boat, because there’s not a freaking single right angle in it. There’s no 90s [degrees]; it’s all curves.”

In spite of this, Loeschner bought a set of plans, studied up on the 80-year-old designs, and made the first cuts in what would become a 100-hour project. The frame came together easily enough, he says, but the keelson — a 1-by-6-inch plank running the length of the boat parallel with the keel — snapped in half at a knot during installation. Loeschner and his father-in-law, Lloyd, later learned they didn’t need a keelson for this design but they repaired and kept it anyway. The fiberglass applied to the hull went south, and Loeschner opted to cover up the mistake with bedliner. Throughout the winter, it was a process of error and correction, disaster and salvation. Gradually, the form of a boat took shape.

When Loeschner, Lloyd, and I drove the finished product through Truckee’s California Agricultural Inspection station on the way to the drift boat’s maiden voyage, a fishing trip down the American River, the checker didn’t even bother to examine it for invasives. Instead she glanced back curiously and asked, “Work in Progress?” Nope. This thing was ready for action.

In a river put-in smack dab in the center of suburban Sacramento, we poured a splash of Lagunitas on the bow for tradition’s sake and pushed off.

And the damn thing floated. Coated in truck bed liner and sporting an unfinished interior, it danced downstream as beautifully as any drift boat. It was an effortless task to take a few back strokes and hold it suspended in the current, looking down to see the whole river’s flow moving beneath the boat’s hull.

Only once did we lose an oar in the river. (Note: it’s worth it to pay the extra dollar for oar locks that fit.) I had to hand off my flyrod to Lloyd — it was bent at the time with a fiercely fighting sea-run fish on the end of the line — in order to jump in and swim after the lost equipment. With the oar later firmly in place and secured by a handful of zip-ties and some duct tape, we rowed easily through the rest of the run.

After a successful trip in the books, Loeschner has his eyes set on a voyage down the Yuba next, and then, who knows. He now has proof of concept, and says this probably won’t be his last boat. With burgeoning boat handling skills and a passion for the trade, he hopes to one day build a larger craft that can handle the Sea of Cortez and even the inside passage to Alaska. He says that Tahoe is as fitting a place to start the journey as any, considering the lake’s sometimes overlooked history of boat building.

“[Boat building] is part of Tahoe heritage,” Loeschner said. “It’s just been lost because there aren’t a lot of working class people up here anymore, but I think it’s something we should look into as a community.”

If I Had a Boat

If I Had a Boat
Community / Education