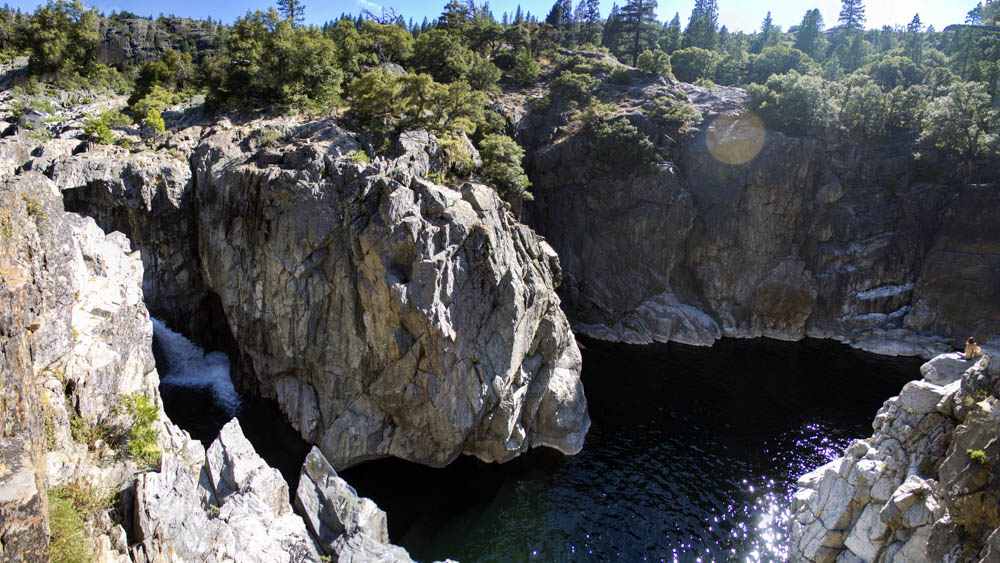 On the pages-long Facebook thread discussing the fourth annual Emerald Poolooza — a gathering of highline slackliners, cliff jumpers, performing artists, and spectators on the Yuba River’s Emerald Pools — a whopping 2,000 people were interested, and more than 500 said they were going.

What was meant to be a discussion about the event and how to make it run smoothly turned into a fiery battle. Arguments over environmental stewardship, safety, locals vs. outsiders, and overcrowding defined the thread, with physical violence being threatened if the event went on as planned. Organizer Jared Dalen decided to cancel the event a week prior to its intended date of June 17.

“After consideration of recent negative attention EP4 is getting, the “event” (or simple gathering of like-minded nature folk) is CANCELLED,” Dalen wrote on the event page.

The issues raised by the thread typify the thorny traits that many of the playgrounds in Tahoe and the surrounding areas face — the pools are in a sensitive, remote environment, stunningly beautiful, increasingly popular, and potentially deadly, and people disagree on how to make it all work.

Emerald Pools holds an intoxicating array of attractions in a compact zone, so the high-volume is a surprise to no one. A 20-foot waterfall drops into a steep ravine, with granitic cliffs lining the banks of the clear, icy South Yuba River. Small enclaves and perches catch the summer sun and invite the casual sunbather, while cliffs 10 feet and higher provide a paradise for those looking to catch a thrill or just dive into the river.

“There’s nothing like that terrain anywhere in the country,” said Kevin Holtz of Reno, who has been visiting Emerald Pools for 10 years. “The surroundings, environment, and people are completely unique.”

The action can be breathtaking. On a given summer weekend, acrobatic displays of flips and dives are thrown off 68-foot Goliath rock, the pools’ main high cliff. In more recent years, people have begun stringing slacklines across the canyon to practice highline slacklining (a main element of past Emerald Poolooza events, see here), where participants balance above the water on one-inch-wide lengths of nylon up to 50 feet high.

“It’s everything. The clarity of the water, the smell of the air, the cliffs, and the whole setting contribute to the majesty of the spot,” said Nevada County native James Gamble.

But the majesty, coupled with the proximity to Tahoe/Truckee, Reno, and Nevada City, has led to concern about whether the pools will remain a gem, and if changes need to be made.

Risk to Environment, Risk to Body

The issues associated with the growing popularity of Emerald Pools range from the risk of injury or death to its users, and myriad environmental threats.

The potential danger of jumping from high cliffs into a moving river are obvious. In 2016 there has already been a jumping-related fatality, as well as a major injury. Fatalities have been common over the years, and even a small shrine sits on top of Goliath rock, visible to everyone who prepare themselves to take the leap.

The consistently frigid water, currents near the waterfall, and unseen underwater logs add to the inherent risks of jumping and swimming. Additionally, the river’s flow is regulated via Lake Spaulding, which can significantly change river depth and flow. While that information is available to the public, Jeff Pettit, the Nevada County Sheriff’s captain, believes people don’t stay up on this information.

“The actual risk to the individual has not increased over the years, but the notable increase in visitation has upped the potential for an individual getting injured,” Pettit said.

Should a rescue be needed, response time to the pools can be delayed by several factors: The steep trail that is the only access point, the physical distance to emergency responders, and the lack of reliable cell phone service, not to mention the complications of the rescue itself.

“The reality is, if somebody’s underwater we are not going to get there in a timely fashion,” said Sam Brown, captain of the Nevada County Search and Rescue team.

“Between the time somebody calls us and the time we begin the rescue is usually about two hours.”

The environmental discussion centers around garbage, dog and human waste, and campfires. There are no public toilets available near the river nor trash cans, and cleanup is left up to the individual. Some worry about trash and waste, especially if people are camping, but many think that if individual responsibility is maintained, the area will be clean.

“We don’t think this area needs to be controlled or further managed. Nature is open. We understand the risks involved but believe we can still be safe as possible, and clean up after ourselves,” Holtz said, who carries trash bags down to the pools, and is vocal about educating others if he sees people littering or endangering themselves.

Caleb Dardick, the executive director of South Yuba River Citizens League (SYRCL), sees wildfire as the most potent threat. “The terrain is similar to that of where the Rim Fire happened,” said Dardick. “An out-of-control fire can threaten hundreds of homes and lives, and pollute the watershed, which reaches the levels of a catastrophic disaster.”

A veritable mishmash of localism and land ownership comprises a large part of the Emerald puzzle. Some of the anger on the Facebook thread stemmed from those who identify as locals opposing the infiltration of what they deemed as outsiders from Tahoe/Truckee or Reno.

Plus, the actual ownership of the pools, the parking, and the trail is a puzzle. Consider this: The land near the pools and the parking area is owned by a combination of public agencies including the Bureau of Land Management, the U.S. Forest Service, and the Nevada Irrigation District, as well as private landowner PG&E. The area directly adjacent to the pools is privately owned by an individual, but the water itself is considered public up to the high water mark, as is written into the California constitution.

This head-scratcher makes it difficult to make changes that might require agreement by all the stakeholders. But this is exactly what some think needs to happen.

“We presume people are coming to the river because they love it, but it is getting loved to death,” said Dardick with SYRCL. “There aren’t services in place to accommodate the visitation increase like parking, toilets, and facilities, and we need a coordinated effort among the major landowners to build these facilities and figure out what the carrying capacity is.”

Dardick says he has met with the different entities, which resulted in positive discussions, but a set plan of action has yet to be worked out. He points to nearby Purdon Crossing on the Yuba as a popular recreation area where the major players were able to come together and achieve results.

Gamble, from Nevada County, who is equipped with first-aid and other medical training, supports people enjoying the pools and doesn’t advocate any significant change, but felt the numbers were excessive for what makes sense. “If something happened and someone was going to jump in for a rescue, it would be me. With 500 people going, it was too much for me,” Gamble said.

Some believe that the Facebook number of 500 people attending Emerald Pooloza was unrealistic, and likely a result of the event being open to the public. “Even if the weather was perfect and the event wasn’t canceled there was no way there would be 500 people. In past years, there was 100 max,” said Holtz.

Although the official Emerald Pooloza event was canceled, Holtz said he and a couple friends went that weekend to enjoy the pools as they have for years. Although some rain crept in, they set up a slackline, did some jumping, and had an excellent time with zero conflict from anyone.

Whether or not changes come to Emerald Pools, or if the place carries on in its largely self-regulated state, the lessons learned from the way things progress may be an indicator for the many other recreational areas in the Sierra. But with increased visitation, some enthusiasts feel that while the pools are still beautiful, the remote wilderness aspect has already vanished.

“It has changed over the years. I love what the pools are, but it has changed enough for me to go to a different spot,” Gamble said.