Home Columns The Day Off Heed the Windy Call of Kiteboarding 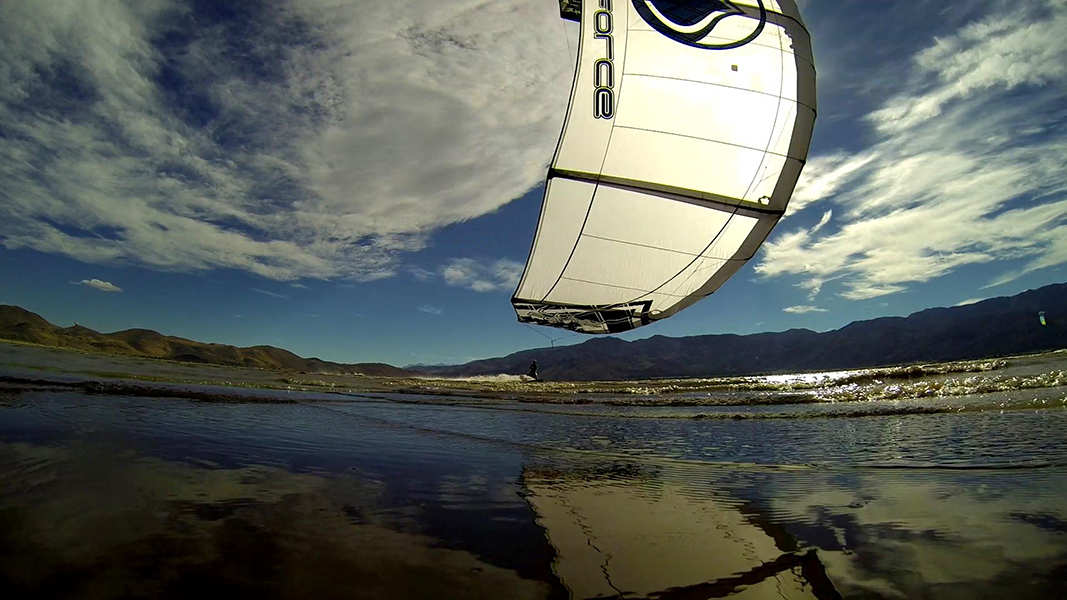 From the timing of opening weekends to atmospheric rivers, the Tahoe region relies entirely on the cooperation of uncontrollable natural forces to provide us fun, income, and lifestyle. While we depend on winter weather to thrive socially and economically, it remains ever more unpredictable.

However, there is an exception to this conundrum — a quickly growing, year-round boardsport that allows participants the rare chance to actually take what Mother Nature blows at us and use it to power through the elements.

Connected to broad, technical wings and strapped to streamlined watercraft, kiteboarders seize windstorms, and wield them to split the surface of oceans and lakes, outrun breaking waves, and for the experienced, take flight.

Want to start kiteboarding? First, make room in your gear closet (or garage). The sport requires an array of specialized equipment.

There are two kinds of kites: inflatable and foil. While the former is much easier for beginners, you can learn with a foil kite, too, which functions like a parachute. The air that passes through the layers of fabric in a foil kite creates its shape, the primary advantage being more kite space exposed to the wind.

You’ll need a board, of course, as well as a harness, control bars, lines, and for some disciplines of the sport, boots and bindings.

The fast-moving sport has spawned international contests, world tours, popular personalities, magazines, and YouTube channels. Earlier this year, kiteboarding was approved for the 2024 Paris Olympics, clearly a powerful indicator of the sport’s arrival. According to a 2017 report on Businesswire.com, the global kiteboarding industry will sell $2.9 billion in equipment by 2021.

Sales may not be as robust here in Truckee and North Tahoe (yet), but the sport has an ardent, year-round following. As companies, especially Red Bull, continue to promote extreme athletic events, people who love kiteboarding should expect their sport to expand, and to be provided more opportunities to pursue it beyond a recreational level. And if there was ever a sport to overlap with the company’s slogan about getting wings, it’s kiteboarding.

One person who can attest to Tahoe’s pull on kiteboarders is Tahoe Kites founder and lead instructor, Shandor Korda. His company provides instruction for total beginners or advanced skills training for the experienced wanting to reach the next level. Lessons are conducted on Tahoe or at Washoe Lake. A full-time mechanical engineer, Korda found himself drawn to kiteboarding while watching a couple of guys skim across a snow-packed Martis Valley. He immediately saw it as a way to stay focused on snowboarding without the help of a lift.

“I saw it in 1999 out bcry the airport,” Korda said. “I found a setup on eBay, but I realized it may not be safe to go out by myself, so I didn’t end up buying the gear.”

Finally, in 2013, a friend who started kiteboarding was willing to teach Korda the basics. On a scale from one to 10 for difficulty, Korda said learning to kiteboard is probably, “around a nine.” Most of the initial lessons are about safety and kite control.

“It’s something anyone can learn to do, but it’s similar to backcountry snowboarding in that you shouldn’t go at it alone,” Korda said. “But, the worst injury I’ve had was a sprained ankle; it’s relatively low impact.”

In the same way rock climbers flock to vibrant desert towers in southeastern Utah, Lake Tahoe offers kiteboarders as much to see above and around them as it does below. It’s a true 360-degree experience. Kings Beach in North Lake is the perfect place for it, offering the space to learn and execute big maneuvers, especially in quieter shoulder seasons.

For winter kiteboarders, the meadows on Mt. Rose summit offer plenty of opportunity when the snow falls, and the lift lines swell. However, flying across snow can be less forgiving than water, especially when snow depths vary, and trees enter the picture. Those new to the sport should be comfortable on water before attempting the transition.

Like our region’s popular snowsports, kiteboarding has multiple disciplines, according to Korda. There’s wave-riding, freestyle, wakestyle, freeride, and racing. Wave-riding integrates elements of traditional surfing; wakestylers leverage waves instead of the kite to gain air; and freestyle is an open combination of aerials and low-elevation tricks. Freeride is general kiteboarding, the style to which most beginners would default. Racing is exactly that, and involves riders streaming along the surface of the water. Korda’s tried and taught them all and has no real favorite. Part of Tahoe Kites involves teaching current kiteboarders new disciplines.

When asked what he most often hears from his students after a lesson, Korda said he can’t pinpoint anything specific, but affirmed that no one has ever called it boring.

Who would try something boring? This is Tahoe, after all.