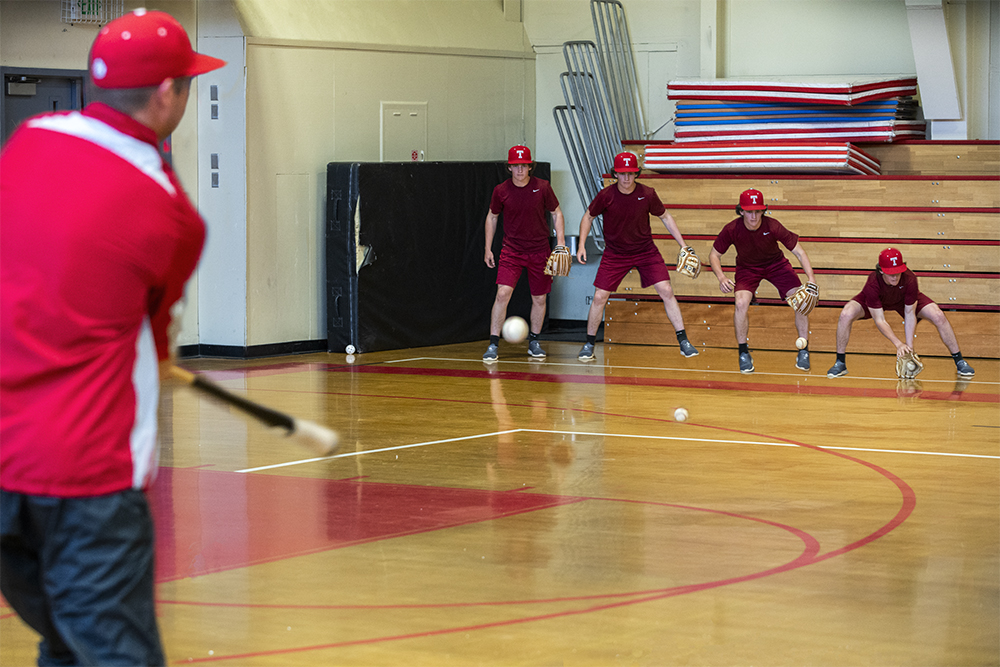 The ball whizzes off the hardwood floors. The swing of a bat is followed by the gentle thump of the tee rocking back into place. The sound of leather snapping against an incoming toss echoes off the gym walls. They’re not exactly the sounds associated with spring baseball, but such is the reality of playing a spring sport in a mountain community.

For the Truckee High School (THS) varsity baseball team, the snow that provides the lifeblood, both economically and spiritually for this community, presents an interesting host of problems. When the rest of their competition takes to the field in early February across Western Nevada, the THS team often walks into the gym, their field sitting nearby, unused, buried under several feet of Sierra cement. Baseball is fundamentally an outdoor sport, and when it comes time for opening day, Truckee’s lower elevation opponents have had several weeks of valuable outdoor practice.

In a gym, there is no sun to worry about when fielding a fly ball. Grounders bounce true and straight, unaffected by the imperfections that make playing on grass more variable. While Truckee High’s two indoor batting cages enable the Wolverines’ players to get crucial swings in, hitting in a cage doesn’t allow for the same feedback as playing outdoors.

Varsity head coach JR Murphy encountered the same problems while he was a student athlete at Truckee High himself.

“Another huge challenge of hitting in a cage rather than out on the field everyday is seeing the result,” Murphy said. “You think you hit it hard, but where is it ending up? What is the end result?”

After Miracle March deposited several feet of snow in Truckee, dashing any burgeoning hopes of outdoor practices, the Wolverines turned to the gym. While they’ve managed a few practices in Reno, the team knows they have to work doubly hard to overcome the limitations of the local climate. Senior outfielder Tyler Ferrera, who will continue his baseball career at Mayville State University in North Dakota, uses that extra challenge as motivation, saying, “We’ve been really good at staying focused in practice because we know we are at a bit of a disadvantage.”

Then too are the challenges of simple scheduling. Between JV and Varsity baseball and softball, four teams must share the cage space — not to mention other indoor sports like track and field sharing the gym floor — forcing the teams to be flexible in their practice times. According to Murphy, they “wake up every morning not knowing what time practice is.” Games are no easier. Home games are played at the Golden Eagle Sports Complex in Sparks — the THS team often travels further for its own home games than its opponent. “It’s a circus, it really is,” Murphy adds.

Despite these challenges, the Wolverines are off to a hot start in 2018. After consecutive losing seasons in Murphy’s first three years as head coach, his squad has jumped out to a 11-4 record to start the season, including a 7-3 record in league play that has them tied for first place. Murphy credits this to “the kids really buying into what we’re trying to teach,” while also acknowledging his own learning curve the last few years.

A key shift this year too was the return of Murphy’s former coach during his own playing days at THS, Joel Estabrook, who has rejoined Truckee this year in an assistant capacity, lending essential experience and discipline to the program. “When Estabrook comes around you know it’s game time, and there’s no time to mess around,” says senior Colin Just, a first baseman and pitcher for the team, adding, “What he’s done for the team atmosphere has been really beneficial for us.”

While this year’s team boasts only four seniors, many of the players have played alongside each other since youth ball — one of the benefits of a small community. This has resulted in a sense of family and comradery among the team. “I see this group coming together and playing for each other,” Murphy said, and Just agrees: “We’re like a big family. We’re really close with each other. Everyone is on board to win, and everyone is on board to be committed.”