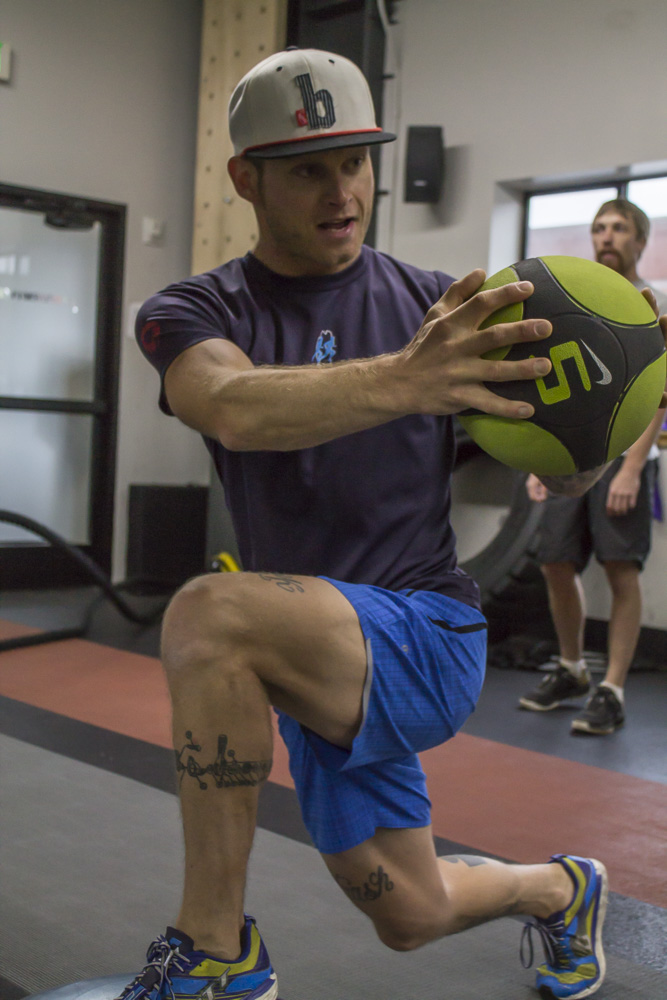 Boards? Check! Boots? A bit stiff — could use some laps around the house — but check! Brand-new outerwear that can keep you dry, should you get caught in a downpour at 8,000 feet? Check! Now how’s that most important piece of gear doing? The one that turns the skis and gets you out of bed in the morning? You know, your physical body. I asked a few of the area’s top local trainers how they get athletes prepared to handle whatever the mountains throw at them over the winter months.

Over the years, Weaver has found that some of the best skiers often have under-developed form and poor movement mechanics. The type of training he recommends for ski and snowboard conditioning draws on CrossFit exercises. Many of these movements start with a quality air squat (no weight). A form with full range of motion in the squat is the foundation that can be built on to progress to more powerful, strenuous exercises like a squat-thruster, snatches, and cleans. Once repeatable form has been achieved, Weaver suggests bumping up the intensity by adding weight, speed, or exercise variety. In addition to legs, Weaver stresses that the core has to be strong because movement starts from the midline and extends to the legs and arms. Many of the functional movements of CrossFit, such as the overhead squat and pull-ups, solicit these core midline stabilizers,

One of Weaver’s favorite pieces of equipment is the jump rope. Combine three rounds for time of 25 double unders (two spins of the jump rope in one leap) with 25 air squats and a 400-meter sprint with no rest.

Chris Cloyd is the lead trainer and general manager at Truckee’s Performance Training Center by Julia Mancuso. Cloyd has trained a number of outstanding locally based skiers and snowboarders including Squaw Valley’s Ralph Backstrom, who won a World Freeride Championship, and Reno’s Chas Guldemond, a member of the U.S. Snowboard Team at the Sochi Winter Olympics and a 2012 Slopestyle World Champion.

According to Cloyd, the focus of any winter sports training program should be stability — both the stability of joints and muscle chains, and the skills necessary to stabilize in space, i.e. balance.

“Rotational movements should be a big focus, as the sports we love happen in three dimensions,” Cloyd said. “You have to be able to control movement and engage power in space to stay upright and truly apply your fitness to your skiing and riding.”

Cloyd recommends a well-rounded, weekly training program that includes at least three days of sport-specific strength and stability work with an emphasis on the above concepts. He likes the Bosu ball and foam roller to maximize training. “The Bosu ball allows you to train balance and stability through the feet, which is a big deal since we’re training for skiing and snowboarding,” Cloyd said. “The foam roller would be my desert island piece of equipment, as it allows you to train alignment and balance as well as assist in recovery from hard training days and even harder days on the hill.”

According to Egan, every “body” preparing for the ski season should emphasize motor control of specific whole movement patterns. Rather than opting for explosive, heart-pumping workouts, Egan advises engaging in whole body movements to build strength at end ranges (i.e., the end point of natural movement) where you’re most susceptible to injury. Egan stresses three major points in winter conditioning:

Address Asymmetries/Movement Imbalances. Asymmetries are any imbalances or differences from left to right, front to back, and top to bottom. Addressing asymmetries from right to left is primary, as the body should be balanced left to right during all movements. Asymmetry is the number one risk factor for injury other than previous injury.

Core Integrity. The core should responsively engage the inner, middle, and outer core in a uniformed manner known as bracing — reflexively responding to your desired movement and whatever the mountain throws at you. Learn to brace everything from your pelvic floor to your six-pack for stability, strength, and power.

Foot/Ankle Mobility. Proprioception, the interlink between the brain and the body, is the key to “feeling” the snow. Limitations in range of motion and stiffness piled up from a summer of running trails can leave a body desperate for lower leg work. Skiers especially need good dorsiflexion (forward ankle bending), which is critical for edge control and power. Strong dorsiflexion enables a skier to save a loose turn from those pesky snow snakes rather than taking a season-ending tumble.

Getting yourself in shape for winter has benefits beyond looking buff in the lift line or looking lean at the après scene. If you plan on throwing yourself down the hill all winter, the gym is the place where you prepare yourself for impact.

Get Ready For Winter
Arts & Culture
All Day