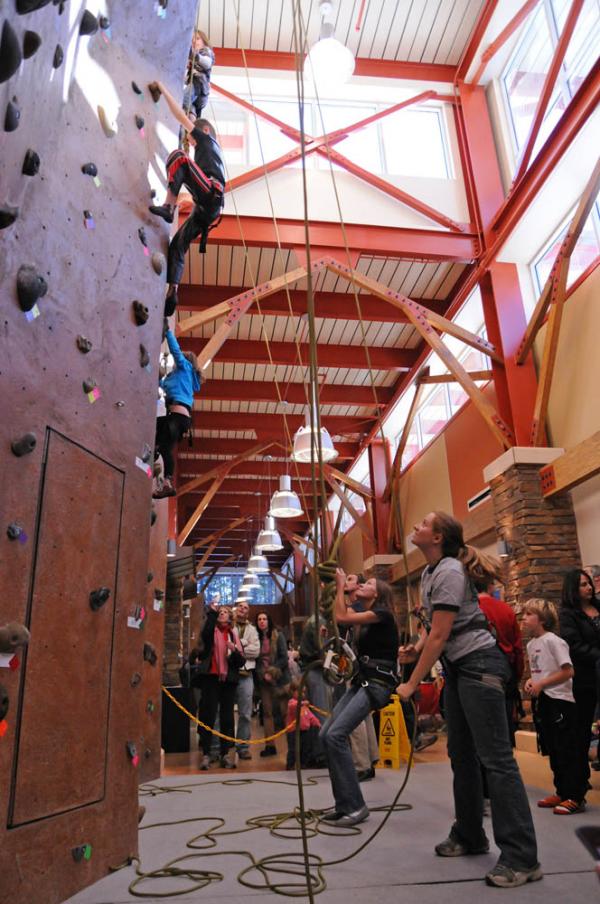 Have you been to the new Truckee Community Center yet?!

It was with great pride and joy that the Truckee Donner Recreation and Park District unveiled the amazing new facility at a grand opening celebration on Dec. 5. Two days later, not only the doors, but the climbing wall, the double court gymnasium, the elevated running /walking track, and the community rooms and classrooms all opened to the public.

If this new recreational center sounds like a dream come true for Truckee, it’s only because it is. The 40,000 square foot building located on the far east end of Donner Pass Road across from the Pioneer Center is unlike anything the town has ever had at its disposal. The potential of the building to host community events both large and small is genuinely enormous.

But beyond the ability to hold special celebrations, it’s the daily gatherings that will put the facility on the map. The TDRPD’s Winter/Spring Activity Guide is chock-full of more offerings than ever before and most programs use the new rec center for all or part of the class schedule. There is no doubt those front doors will see a lot of traffic.

One group of athletes that will surely beat a path to the rec center is the region’s avid soccer players. There will be no need to drive to Reno for competitive soccer come winter as the new gymnasium is big enough for two side by side ‘Futsal’ fields, an internationally endorsed style of five-on-five indoor soccer.

Having founded the Summit 7000 Soccer Academy, a local soccer training and advocacy organization, Belisle knows the power of practice and is ecstatic that local players of all ages will now have a home field for year-round skill development. The small goals and tight boundaries of the Futsal field reward precise play and deft ball control so every player who participates will be hard pressed not to improve their game.

With the local youth club teams and the high school varsity squads already dominating regional play there is no telling what this new practice facility will do for our future soccer phenoms. Blessed with a new place to dribble, pass, and shoot out of the weather, many dedicated players will take full advantage of it, maximizing both the potential for fun and the odds of developing truly world class soccer skills. Let’s just say I wouldn’t be too surprised if the 2016 US Olympic soccer team had a Truckee resident on the squad…

But while the completed rec center gym glimmers as a tangible reality to Truckee’s soccer, volleyball, and basketball players, there is another group of local athletes whose rec center dreams are still fantasy. The Truckee swimming community has high hopes that one of the next phases of development at the rec center is the construction of a new aquatic facility.

The effort to build a substantial indoor swimming complex adjacent to the rec center is being led by a group of local swimming advocates called the Truckee Aquatic Coalition. Backed by the popularity of the Truckee Tahoe Swim Team, which has 100 youth participating and 80 more on the waiting list, the coalition feels the town deserves a swim center that can meet the community’s competitive and therapeutic demands.

The TDRPD’s current pool at the Truckee High School is an aging dungeon that is overbooked and doesn’t have enough deck space to safely hold a swim meet. Speculative plans for the new aquatic complex include a 25×25 meter lap swimming pool with a diving well, a circular current channel (small lazy river), and a water playground with zero entry access (sloped ‘beach’ entry).

The TDRPD Board of Directors have supported the Aquatic Coalition’s planning process thus far and have approved a request for proposal to solicit estimates on the building project. However, there are no easy answers for how to pay for the pool complex.

The Town of Truckee has suggested securing funding by going out for a bond in April 2011, possibly using a mail-in ballot. The coalition is open to the bond measure but is also seeking private donations. The goal is for donations to allow the bond measure to be minimal enough for Truckee tax payers to grin and swallow. Here’s hoping!

If you are interested in donating to the coalition or hearing more about the proposed aquatic center, contact Dan Kates, truckeeaquaticcoalition@gmail.com.

For more info about the Community Rec Center or to view a TDRPD activity schedule visit tdrpd.com

~ Discuss this article with the author, email sports@moonshineink.com.