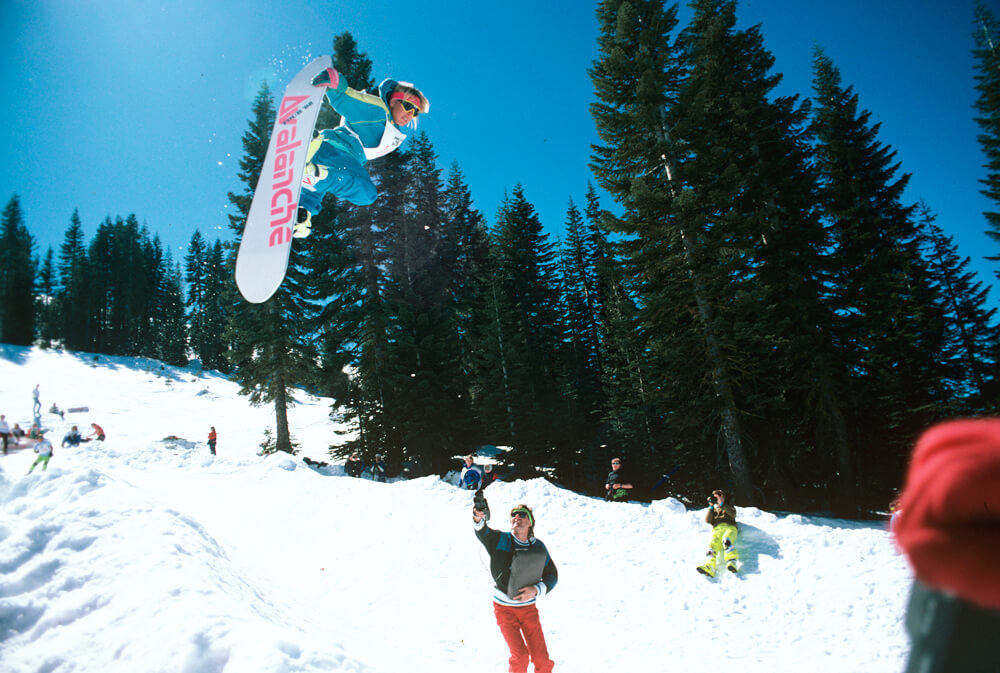 The YOLO (You Only Live Once) flip, a switch 1440 double cork, will likely be seen at the Olympic Games in Sochi this month, and it represents perhaps the most cutting edge trick possible in halfpipe riding today. To do this, the rider, likely either Shaun White or Iouri “Ipod” Podladtchikov of Switzerland, will blast off the 22-foot walls while riding switch, or backwards. He will pack four full rotations and two inverts into the same air, and then land in sync with the wall’s transition. He will aim to boost around 15 feet out of the pipe, or almost 40 feet above the flat ground. He will have a few short seconds to gear up for another dazzling trick on the opposite wall, aiming for five to six total maneuvers down the 600-foot pipe. Global fame, big money contracts, gold medals, and the risk of debilitating injury and death are all on the line.

While the Sochi halfpipe took center stage on Feb. 11 and 12, the origins of the sport can be traced back 35 years ago and 6,578 miles away to a few high school skater kids messing around in a creek bed at the Tahoe City dump, looking for creative ways to ride snow.

Pipe Dreams In 1979, the first snowboard halfpipe was constructed on land then owned by the Truckee Sanitation Company at the top of Jackpine Street in Tahoe City. It was 14-year-old Mark Anolik, a freshmen at North Tahoe High School, who found the creek bed that resembled a natural halfpipe. He shared the discovery with his classmates Terry Kidwell, Bob Klein, and Allen Arnbrister.

The four boys had shovels and a thirst for taking their skate tricks to the snow, and made due with the imperfect setup. “The Tahoe City Pipe was basically a start ramp and a landing area with only a couple hits possible,” says Keith Kimmel, who moved to Tahoe in 1982 and learned about the pipe via Tom Sims, founder of Sims boardsports in 1976.

The crew would ride it regularly, though building the pipe often required more time than actually riding it. “It took about four hours to dig it out and pack the in-run, and only one rider at a time could go,” said Klein, 48, the director of snowboarding at Octagon, a sports marketing company in Reno.

Word began to catch on, and a growing cadre of skate and snowboard pros made it to Tahoe to ride the pipe and get photos. “You could do airs without having to grab your board,” said Kimmel, 51, now a house painter in Truckee. “I could do more skate tricks on a snowboard than on a skateboard because it was easier.”

With snowboarding as a whole in its infancy, the boards back then were rudimentary.

“The boards really sucked; the early ones didn’t even have metal edges on them,” Kimmel said. “They had two bungee straps for bindings and I rode with sneakers or hi-top skate shoes.”

But the Tom Sims influence pushed Tahoe towards becoming a mecca for freestyle riding. “Tom came to Tahoe and helped [us] to see that halfpipe could be made into a sport, that it could be an event at a Sims contest,” said Kimmel.

East Meets West In 1983, Sims did just that, and organized the first snowboarding halfpipe contest, the Sims World Snowboard Championship at Soda Springs. Snowboarding contests had been around, featuring slalom and downhill events, but the worlds in ’83 debuted halfpipe as a competitive event.

However, problems quickly arose. For one, the halfpipe was reportedly built too high on the mountain where the pitch was too steep for riders to carve the walls fluidly. “The pipe was horrible, it was basically two rows of snow chunks. And the chunks were only about 4 feet high,” said Kimmel.

Also, the presence of Jake Burton, founder of the world’s largest snowboard company, Burton Snowboards, and his east coast team at that first event is a source of longstanding debate within the snowboard world. The Burton team, from Vermont, had a strong background in snowboard racing, while the Sims team was influenced by skating. This difference in style led to some debates on the merits of including a halfpipe event in a world championship event.

Allegedly, Burton didn’t initially welcome the inclusion of the halfipe event. In “(Sick): A Cultural History of Snowboarding,” author Susanna Howe states that Burton “adamantly protested halfpipe’s inclusion in the event,” and that the Burton team saw the halfpipe as a way to “rip off of skateboarding and a cheap way for the Sims team to win.”

Klein, however, believes it was just Burton trying to be fair to his riders, and thinks the controversy is overblown. “Some of the Burton riders thought the pipe shouldn’t count for the overall title because a lot of riders had zero experience with transitions and only a few skate-minded riders had built transitions and rode them,” he said. “I think Jake may have felt a responsibility to try and make it fair for everyone. Somehow someone said Burton wasn’t into freestyle or pipe, but that wasn’t true.”

The event went on and Eddie Hargraves, who then lived in Soda Springs, won the initial halfpipe event. Terry Kidwell won the next two years and carried his success into Colorado when the event moved to Breckenridge in 1986.

By this point, media attention had caught on, and snowboarding began to be legitimized as its own sport, not just an offshoot of skiing or skateboarding on snow.

Blast Off Over the decades, pipe riding grew in popularity across the country as snowboarding developed, making its way toward a large slice of the snow industry pie. In the late ’80s, a few resorts began altering the landscape in the summer so that the snow would fill in and form a halfpipe. Then in 1991, the Pipe Dragon, a grooming machine made with a curved arm attached to an excavator with tracks and pulled by a snowcat, was invented in Colorado. This made uniform pipe construction possible.

However, it was not a case of unfettered success. Poor pipe construction at many resorts left some riders uninterested, and snowboarding as a whole struggled to find its identity and its place among the industry. Still, there was enough interest in pipe riding that by the turn of the century it was featured in the X Games, the U.S. Open (a Burton contest), and the 1998 Olympics in Nagano, Japan.

All the while, pipes were growing. From 12 to 18 feet, then seemingly topping out at 22 feet with the Zaugg Superpipe, the current Olympic size. Tricks became acrobatic and a redheaded kid from Southern California named Shaun White would grow to international fame as the biggest star the sport has ever seen, with halfpipe as his signature event.

Tahoe helped it all to grow, and in time embraced boarding and halfpipes commercially. Donner Ski Ranch was the first Tahoe resort to allow snowboarding in 1980, and pipes would become commonplace around the Basin. Tahoe also remains relevant going into Sochi. Danny Davis of Truckee is on the men’s team and fresh off a gold medal victory at the X Games. Additionally, in 2011, White signed with Northstar and the Tahoe resort is now his home mountain.

“I flat out love it [the Olympics],” said Klein. “It means we are legitimate to the world and not just a bunch of dirtbags like me and my generation of riders.”

And the new generation certainly owes a lot to the dirtbags who brought it out of the dump and into the global spotlight.

~ Did you know the halfpipe originated in Tahoe? Comment on this story below.

From the Trash Dump to the Olympics
Music

From the Trash Dump to the Olympics
12:00 am

From the Trash Dump to the Olympics
Business