Home Sections Sports and Outdoors For Thrill of the Ride 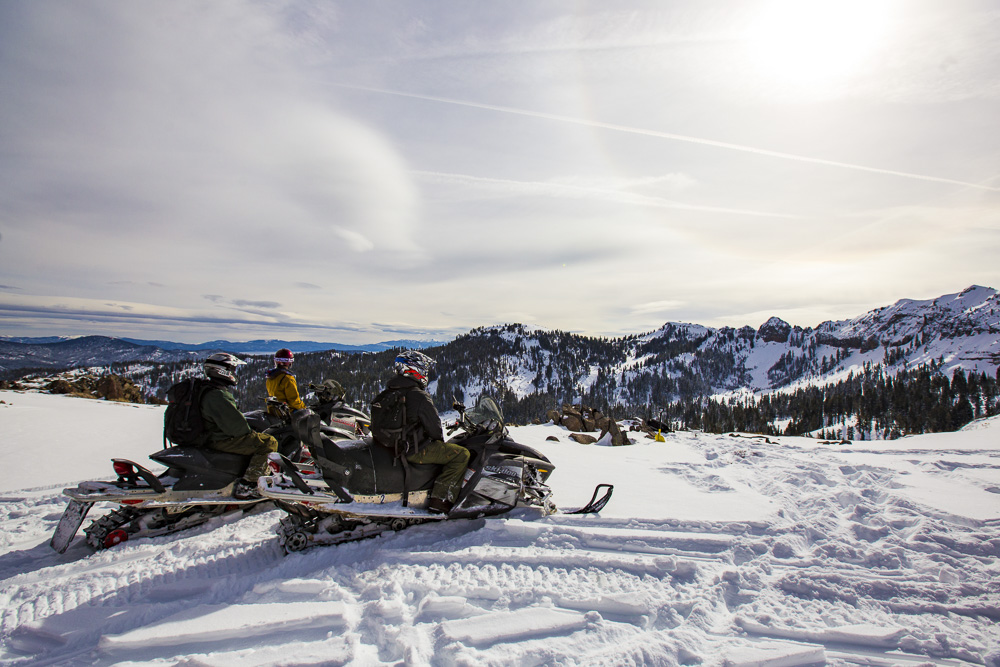 The low sputter of the two-stroke engine roared into a high-pitched whine as I pressed down on the throttle, spiking the marker on the tachometer followed summarily by the speedometer. The sled shot forward and my arms stretched straight out, seemingly pulled along by the handlebars.  I let out a whoop of excitement as the responsiveness took me by surprise, and I eased off the gas allowing the drag of the snow to quickly curb my speed.

I soon got more comfortable on this 500-pound machine, allowing myself to run it at full speed on the open, flat stretches of the meadow. I began venturing into the traces of untracked powder near the trees where I could sail through the wind-loaded glades. Snowmobiling began to feel like more than just a speed thrill, and I glimpsed the appeal of a sport I’d often heard criticized.

The powder billows above and around, almost akin to skiing. The whirring of the engine somehow seems muted.  And yet, it’s work. The snow pulls at the sled without the ruts of previous tracks to guide it. I slide my center of gravity to the left, leaning to place my weight over one ski, allowing it to dig into the turn.

“When you get into the deep stuff, the track [of the snowmobile] will start to spin without really grabbing,” said Shannon Peacock, a guide for Coldstream Adventures, a local snowmobile touring company. “It feels like you’re in water — essentially you are.”

That sub-zero water isn’t always easy to swim through. Traversing a hillside, which requires leaning into the hill to fight the pull of gravity downward, found me slipping into a tree well on two occasions before successfully finding the right combination of pull and throttle. As Peacock had cautioned mere minutes earlier, “Getting stuck is part of snowmobiling — if you’re doing it right.”

The exploding popularity of snowmobiling is explained less by the thrill of riding, however, than by the demand for expanded backcountry skiing access. Zooming at 30-plus miles per hour to the top of an untracked line sounds much better than trudging for hours on touring skins to get to the same spot. Imagine having your own personal chairlift in the deepest parts of the backcountry! Still, on my first ever day on a snowmobile, skiing was the last thing on my mind. All I wanted to do was float through the powder, conquer that difficult side hill traverse and open the throttle across the meadow.

According to Larry Hahn, founder and president of Coldstream Adventures, people are attracted to snowmobiling for “the adventure and entertainment,” but Peacock adds, “the draw [for me] is that I can get places at certain times when nobody is out there. It’s definitely one of the most rewarding and challenging things I’ve ever done.”

The exhilaration I felt gave me new eyes for the sport. Snowmobiles are, after all loud, gas-guzzling machines that allow people to tread further into the mountains than they might otherwise be able. But Hahn, who pays for the facilities and grooming of multi-use trails on the 3,000 acres he leases in Coldstream Canyon, said “We try to preach tread lightly. Of course, there’s some guys out there that just ruin it for everybody, like anything else, but we do our best.” The trails left by the snowmobiles also have the secondary effect of improving access for others, creating paths for touring and snowshoeing.

Reducing fossil fuel consumption and protecting our natural environment are essential goals, and the cultural shift required to address the problems facing our society may well leave snowmobiling to the past. But, I believe it’s also important to have a little fun and take a break from the tedium of our day-to-day. For many, Snowmobiling is that escape. It’s a passion, recreation, and livelihood. And to the would-be complainers, I recommend one thing: give it a try. Seriously, it’s fun.

For Thrill of the Ride
Sports & Outdoors / Wellness