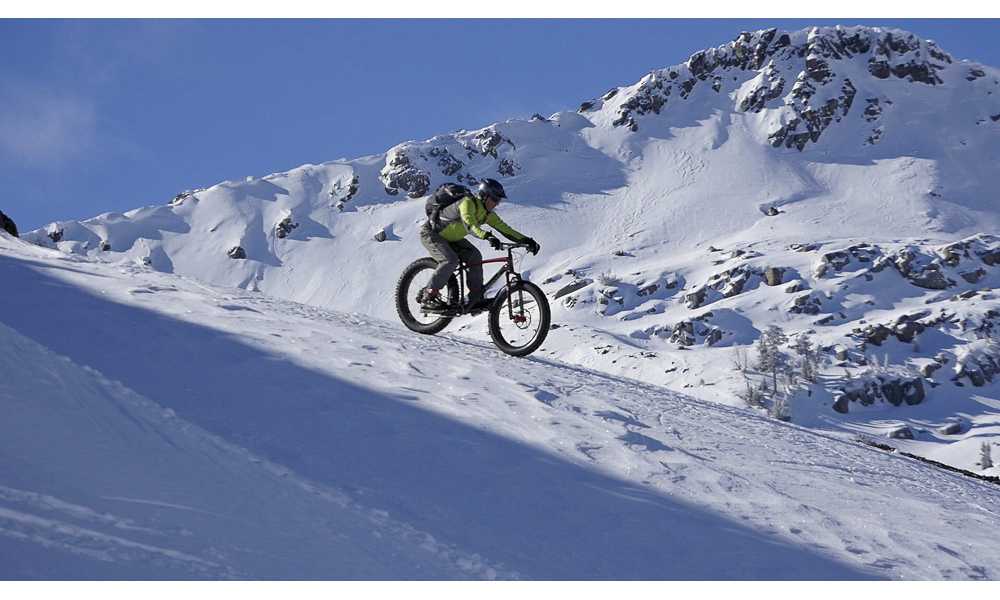 A long snake of mostly beefy SUVs clogs Highway 28 in Tahoe City on the Sunday after Christmas, forming a logjam of ski commuters. A recent high elevation rain event has added a crusty ice layer on top of what has been a steadily growing base in a snow-prolific December. I picture aggravating lift lines and traffic at the resorts, and lackluster conditions in the backcountry.

But it’s a clear and stunning December day begging for outdoor activity, and the conditions were calling for something beside skiing. While for the uninitiated biking wouldn’t come to mind, for others the decision is a no-brainer.

“I just want a way to keep biking through the winter, and these bikes are the best way I’ve found to do just that,” said Mike Miller, owner of Gravity Shop in Tahoe City and an avid mountain biker, as we drove toward Brockway Summit to ride.

The bikes he refers to, called fatbikes or snowbikes, are unique mainly for their bulbous tires. At nearly 5 inches, the widest tire models are about twice that of a normal mountain bike tire. With a huge surface area, blocky treads, and a tire PSI (pounds per square inch) of around nine, compared to an average of 30 to 40 PSI, the bikes grip snow, ice, sand, and mud with minimal slip. The rest of the bike has the same general design as a regular mountain bike, albeit a bit heavier, and commonly without suspension as the low air pressure provides some give over bumps.

In Tahoe, people normally ride fatbikes in places like the Flume Trail and other popular singletracks, on the Nordic trails at Royal Gorge, or just about anywhere with the right snow.

Finding that right snow, however, isn’t always easy. Too much fresh snow and you can’t roll through it, and too much warmth and the slush becomes a burden. Additionally, it helps to have a way to pack down the natural conditions, whether that be from a snow groomer, snowmobile, or just from a few laps on a fatbike.

Miller agreed to take me, a first-timer, on a fatbike ride, and the day we go looks to be a poster day for fatbiking — cold, clear, and jampacked with holiday tourists. We start at Brockway Summit with plans to traverse the Fiberboard Freeway, then drop into a favorite singletrack of Miller’s. The snow is initially a bit warmer and softer than expected, and the front wheel slips and sides, similar to riding on a sandy trail. But it’s a busy holiday weekend and I’m out riding a bike, devoid of any crowds to speak of save a few snowmobile tours.

Since fat biking began unofficially in the ’90s and with the first production model from Surly in 2004, it has been greeted with strong criticism.

Critics call it another niche sport that requires an investment (the cheapest fatbikes start at around $1,500 and go up to $6,000 for high-end models) and say it simply won’t last when so many people are happy skiing all winter and biking all summer.

The word “fad” is thrown around often on Internet forums and articles that are critical of the sport, as well as claims of a lower performance return for fatbikes, which are said to be less manueverable, heavier, and generally less fun than regular mountain bikes.

But fatbike lovers think those voices will be drowned out by the steadilyy increasing sales and improved new technology, such as full-suspension and carbon options, as well as widespread adoption by more manufacturers which can bring the price down.

“We brought the first fatbike to market 10 years ago,” said Tyler Stillwell, the marketing manager for Surly. “For the first nine years, most companies contended that it was something we would all grow out of. Now all those companies that called it a phase or a fad are making fatbikes.”

At Gravity Shop, Miller is entering his second year selling and renting the bikes. He reports selling 15 fatbikes last season and has already sold six this year, and is acquiring more bikes to rent so that he can match increasing interest from the public.

“I have more and more people coming in all the time asking what these things are, how they work, and where to ride them,” he said.

Miller doesn’t see fatbiking as a replacement for snowsports, nor does he enjoy it more than riding on dirt. He sees it as another way to have fun in winter, keep riding year-round, and practice an uncrowded sport in Tahoe.

On the trail, packs of snowmobilers eye up the monster tires and point, wave, and generally look perplexed as to why someone is riding a bike on snow in the mountains.

“Vat do you call thees?” asks a European with a tiny child wedged between him and the snowmobile’s handlebars. Miller gives him a rundown and we move on. On short downhill sections the shade creates a firm surface where the tires don’t dig in and I feel like I’m on packed dirt.

As adrenaline-seeking recreationalists are taking more to fatbikes, the sport is branching out from isolated patches of enthusiasts. Racing competitions are being held in many western states (though there are none in Tahoe), and bikers are experimenting with how to prep the snow so it’s more rideable, such as pulling a weighted device behind a snowmibile to “groom” the trails and thereby attract more people.

In South Lake Tahoe, the film company First Tracks Productions has seen such a strong boom in the sport that it is making a full-length action sports movie featuring only fatbikes. Owner Anthony Cupaiuolo says the bad winters draw more people in.

“The last couple winters have been terrible and that is when it started exploding in Tahoe. It looks goofy but it’s great when it’s dust on crust and you can whip around berms and kick up snow,” he said.

Miller would like people to regularly ride and maintain short trails in the North Lake area and share the information, perhaps on the web, to increase usage and attention to the sport. He also rides at night when the temps are cooler, and sees this timeframe as a way to extend the short winter days’ outdoor playtime.

We pull up to a shaded, firm area that links to the singletrack. “This is the trail that got me hooked!” Miller yells before flying off, disappearing around the berms with no chance for me to keep up. Short, steep sections lead to berms and rollers, twisting around roots, rocks, and bare dirt. Around turns I am sure the wheels will slip and I will go careening into the woods, but they hold. Over roots and bumps I fear my lack of suspension will buck me up and over the seat, but I stay grounded.

Back in town, catching my breath, we pass a few folks strapping on skis to the top of a Subaru, and squeeze by their car. They glance over briefly and carry on, the sight of fatbikes a non-event, just another tool for a fine winter’s day that they’ve seen before.