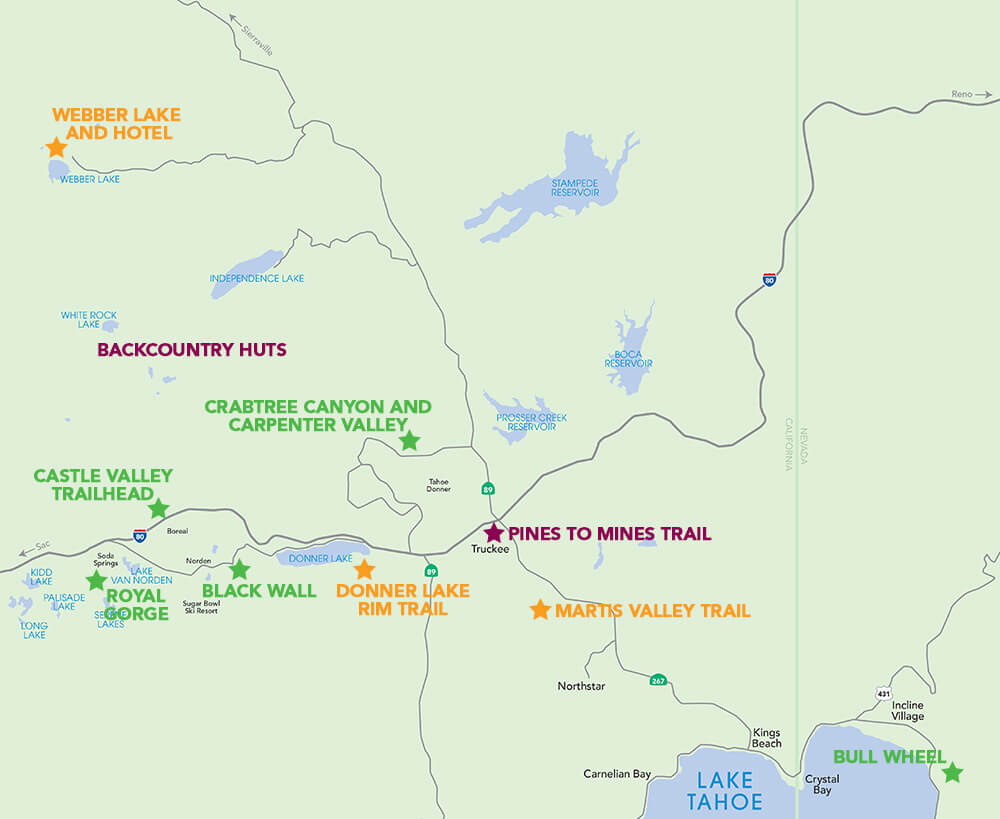 Despite the crowded nature (pun definitely intended) of Tahoe, or perhaps because of it, locals and visitors are thrilled to find new chunks of land to bike/hike/ski/walk/ride horses/whatever else on. And as there’s currently much to discuss in that category, we compiled a partial list of protected trails within the last five years and recreational areas, as well as some big ideas coming down the pipe. While the challenges of permitting and fundraising certainly abound — not to mention development threats — it is a promising time for open space. “We are bearing fruit now, but have been in the growing stages for a long time,” said John Svahn, stewardship director for the Truckee Donner Land Trust (TDLT), the nonprofit behind many of the conservations.

Sitting on the north side of Tahoe Donner — a 640-acre parcel of Crabtree Canyon was sold by the TDLT to the Tahoe Donner association in early April. The TDLT holds a permanent conservation easement on the land, which will protect Tahoe Donner’s borders from future development, but the trust will give management authority to the Tahoe Donner Association. An additional 1,320 acres — most of which is within Carpenter Valley, the area to the north of Crabtree Canyon — is under contract to be purchased by the TDLT in 2017, after having been in private hands since the mid-18th century. “The natural resources and condition of the property [Carpenter Valley] is nearly unheard of in the Northern Sierra,” according to the TDLT website.

After 15 years on the market, one of the most popular trailheads in the Sierra Nevada is under permanent protection. The Castle Valley Trailhead is the access point to such gems as Hole in the Ground trail, Castle Peak, the Pacific Crest Trail, and the Peter Grubb Hut. In March, the Northern Sierra Partnership (a collaboration between the TDLT and the Trust for Public Land) purchased the 412-acre plot of land for $2.1 million, far below the asking price of $7.5 million. “This long-awaited acquisition will allow the Forest Service to create a first-class trailhead into the splendid backcountry of Castle Peak. You’ll be able to explore the untrammeled beauties of the northern Sierra Crest between Donner Summit and Mt. Lola,” said Lucy Blake, president of the Northern Sierra Partnership.

“This might be one of the most important conservation victories for the Sierra in a generation,” according to the TDLT. In 2012, Royal Gorge was purchased from private landowners, who had proposed a large-scale development for $11.2 million, which protected 3,000 acres. But the Land Trust wants to continue to grow the recreational opportunities in the area, and among many future opportunities, 11 miles of new cross-country trails will be open for public use by the beginning of winter 2016/17.

With colorfully named routes, like Touch A Cannibal and Hungover Hangover, the climbing community rejoiced over the success of protecting Black Wall in perpetuity in late 2015. Privately owned since the 1800s, climbers and local groups raised more than $300,000 in seven months to purchase the 11-acre parcel, now owned by the TDLT. But while it’s known foremost for its climbing options, hiking trails are in the future stewardship plan for the area. “We want to create a sustainable trail system to attract non-climbers to the area,” said Svahn of the TDLT.

A popular — albeit via trespassing — 18.6-acre piece of private land has been donated to the Nevada Land Trust by billionaires Cheryl and David Duffield. The trust’s mission is to restore the land, realign a one-third-mile segment of the trail to protect the historic Bull Wheel structure (used in the 19th century to haul logs thousands of feet uphill), and to lessen the grade of the trail. Once the goals are met, ownership will transfer to the Forest Service, estimated to take 12 to 18 months after the March donation. “This will add an exceptional and all-ages-friendly mountain bike and hiker trail above the lake,” said Alicia Reban, executive director of the Nevada Land Trust. The Duffield donation is also a crucial step toward making public a seven-mile portion of trail that runs through the donated parcel, connecting Mt. Rose Highway to Tunnel Creek. It is not currently recognized by the Forest Service as an official trail.

Webber Lake, 45 minutes north of Truckee by car, will open for camping and fishing in 2017, the first time any of these shores will have seen public use in a century. The Lacey Meadows hike — which leads to the lake — is currently public, but camping and fishing on the lake has been private. Additionally, the Webber Lake Hotel, located on the property, will undergo a simple renovation and be placed on the historic register.

Portions of this trail have been open for about 10 years, but completing the 23-mile Donner Lake-encircling trail is a priority for the TDLT and their partners. The trail will be accessible from Truckee, with connections to the Pacific Crest Trail, Summit Lake Trail, and Hole in the Ground trail. Permits and the necessary steps are being taken, and the Nevada Land Trust is hopeful that the full loop will be open within a five-year time frame. “Building the trail is the easy part. Permits and the like are the hard part,” said Norris

Expanding options for kids, families, the elderly, and people with disabilities, the Martis Valley Trail is a 10-mile class 1 trail — meaning it’s paved and of a grade less than 5 percent — that will connect the Northstar community with Truckee. “It will link commercial and residential centers and offer commuting options to help get people out of their cars,” said Mike Staudenmayer, general manager of the Northstar Community Services District. Some sections are already finished, and the full path is estimated to be completed by 2018. It will also be a step toward the larger Resort Triangle Trail Network, which aims to connect all the communities of North Lake Tahoe/Truckee via a Class 1 path.

Currently, with enough gumption, one could travel about 80 miles from Truckee to Nevada City on existing trails and old roads, but it would be tough travel. Thus was born the vision of District 5 Nevada County Supervisor Richard Anderson to make it doable for everyone, and connect the two distinct Sierra communities for hikers and bikers. A consortium of agencies, entities, and nonprofits are working out the snarl of details, permits, and the like, and the payout when completed will be multi-fold. “The benefits of the Pines to Mines trail extend well beyond those of recreation; users will also get a feel for how the Sierra changes between the two sides of the crest,” Anderson said. “This is the same terrain that California’s pioneers had to traverse, so there’s a history aspect to the trail as well.”

“We are hoping to develop a Colorado-style hut system,” said Perry Norris, the executive director of the TDLT, who is working on building and managing three or four simple huts in the vicinity of Castle Peak and Webber Lake. If established, the system will add to the four existing backcountry Sierra Club huts in Tahoe: The Peter Grubb, Benson, Bradley, and Ludlow huts. “We need to complete some strategic acquisitions to make this a reality,” said Norris. “But the ball is rolling, and the completed huts will be a huge boon to the backcountry scene.”

Download a PDF map of all these approximate locations at your top right.