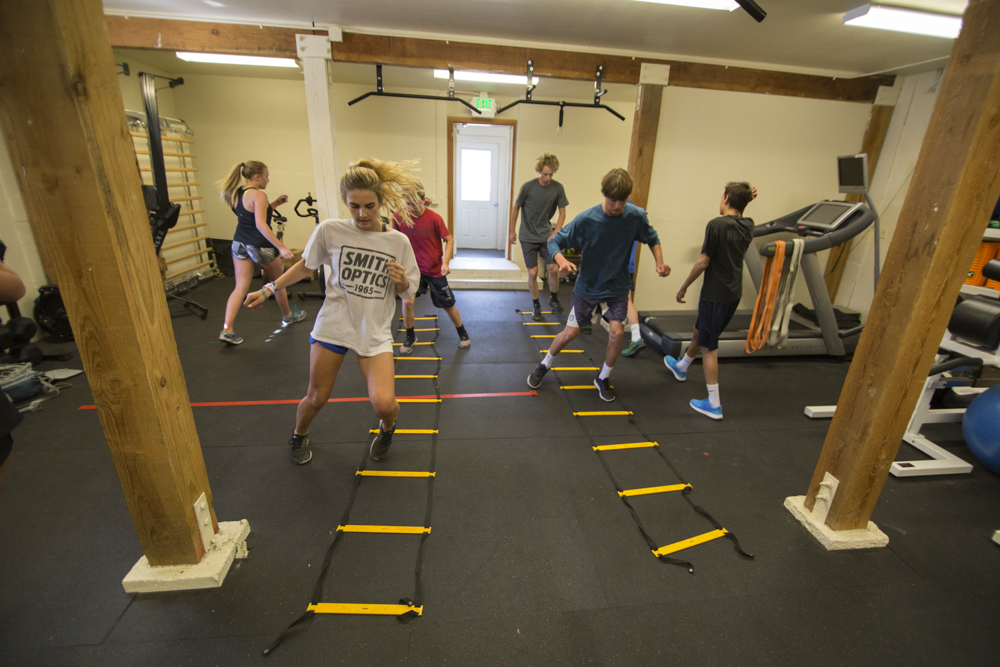 The distinctive clang of metal on metal rings through the gym. Nine teenagers move around the room, adjusting weight rack heights, loading up barbells, and moving support equipment into place. The coach’s booming voice ricochets off the walls of the gym as he calls out instructions. Three kids line up, one at each weight rack, each with a spotter behind them, and the lifting begins.

This is the strength and conditioning program for the Squaw Valley Ski Team (SVST). Athletes as young as 10 can see benefits from participating in some form of training outside of the sport they play (kids are not usually mentally or physically mature enough to reap those benefits prior to age 10). Strength and conditioning training, like the programs offered by Truckee and North Tahoe high schools, as well as other local teams, is good for kids and teens because not only does it help them in gaining strength and athletic ability for their chosen sports, but it can help prevent injury; and in case one does occur, can mitigate the amount of damage done.

For Rob Daniels, Athletic Performance Manager for SVST, the first priority is injury prevention, followed by athletic improvement. Daniels, who is also the strength and conditioning coach for the North Tahoe High School football team, pulls from his previous work experience with UC Davis and UCLA athletes to create the training program for the ski team. This includes warm-up exercises and cool-down stretching to bookend on-snow sessions as well as off-snow workouts.

The first step that Daniels takes with alpine race and big mountain team athletes is to administer a functional movement screen. This will show him what deficiencies the kids lack in their movements. He can then determine exactly how to help each kid improve and see any red flags for potential injuries. His program revolves around “general physical preparedness” movements, like squats, hip hinge, and carry. Perfecting these movements translates to success across the board in all sports, and is crucial to reaching top-tier athletics, he said. Daniels’ training goals break down to a pyramid; he wants kids to first build a broad base of movement, then from there they can add strength, and then the last piece is to specialize in whatever technical aspects are necessary for their sport.

The Truckee football team takes a similar approach to its strength training regimen. Grace Whang is the athletic trainer for both the Truckee and North Tahoe High schools. She is the sports medicine role on staff, rather than the one who trains athletes physically, as the title might suggest. Whang responds to injuries on campus to diagnose and make sure kids receive proper treatment, helps kids through the recovery process, determines when kids are ready to return to sports, and works with the athletic teams to ensure kids are “safe and healthy.”

Whang spends a lot of her time with the football teams, since it is one of the most high-impact sports at the schools. Truckee High offers strength and conditioning classes for all of its students, and the football team goes a step further to provide designated training sessions for its athletes. Whang said that many of the team’s exercises are inspired by Crossfit training regimens.

“It’s especially good for them because in the football game, you’re going all out, rest, all out, rest, and that’s kind of how Crossfit training is,” Whang said. “You go all-out effort and energy, and might get a minute of rest.”

Daniels and Whang agree that proper form is maybe the most important aspect of training. The kids could do these moves for days on end, but if they don’t do them correctly, the benefits are nullified.

“At that younger age, your injury prevention is largely teaching good biomechanics, teaching them to move properly,” Daniels said.

A Marathon, Not a Sprint

And it’s not just high schoolers who can benefit from these programs. For kids younger than 10, the training can sometimes just be playing athletic games, Daniels said. They gain athletic sensibilities, like coordination, just from playing. In the preteen years, it’s about starting to go through the motions and learning exercises while only using their own body weight. There are no dumbbells or medicine balls, but they can still do the same exercises as the big kids. This will give them a head start, and when they get to puberty, they can add weights to the mix and already have the foundation for doing it properly.

Injury prevention is at the forefront of these coaches’ minds, especially in skiing and football, because they are more high-risk sports. Celeste Leon, a physical therapist at Tahoe Forest Physical Therapy in Truckee, said that the most common injuries for young kids are related to the knees. The community is big on skiing, running and soccer, all sports that put a lot of strain on the knees. Kids grow so fast that their muscles don’t have time to keep up with the growth rate of the bone, she said. For this reason, it’s important that kids are taking time to strengthen their core, glutes, and hamstrings, as well as working on flexibility, especially in the hips.

Injuries in young athletes usually occur from overtraining, according to Leon. Doing the same action over and over can lead to muscle overuse, which causes injury. She said that probably 60 percent of the young patients she sees are hurt due to overuse rather than trauma, like a fall.

Overuse is also a common consequence of specializing in a single sport too soon, something that Whang and Daniels are both extremely wary of. Daniels said that a culture of scholarship chasing has developed in youth sports, and parents think that their kids need to specialize in one sport early on if they are going to succeed and get to the college level, when in reality, the opposite is often true.

“They don’t get out there and get to try different sports, and it hinders their overall growth and ability to adapt to different situations,” Whang said.

Whang points to the ambitious, overachieving Northern California culture, and the general level of maturity of kids as reasons that many of them ignore their injuries, or don’t give them enough time to heal before returning to sports. They don’t want to sit out for a few games to heal, but don’t realize that too short a time of rest can turn into a much longer hiatus because they didn’t take care of their injury, Whang said.

It is all a delicate balance. While overtraining can be a problem, undertraining can be an issue as well. Leon said that if kids don’t stay active in the off-season, when they return to their sport they may try to pick back up where they left off, without their body being prepared for it.

But the most important thing is to have a balanced life, Leon said. For kids and teenagers, sleep is extremely important. Kids should learn to recognize when their bodies are fatigued, and be able to say that they need a break. They need recovery days worked into their training, she said.

“Watch for their running technique, when it breaks down. Watch for signs of fatigue. Watch for mood changes in athletes, if they are uninterested,” said Leon.

Daniels tries to keep his workouts varied, because he knows not everyone loves beating themselves up in the gym. He incorporates fun days — like team competitions and beach workouts — into his training program. He lets the kids pick the Pandora station in the gym. Because at the end of the day, they are just kids.

“You need to create something that they want to come back for,” Daniels said. “Not everyone’s going to make the Olympics, but you want them to enjoy the sport.”