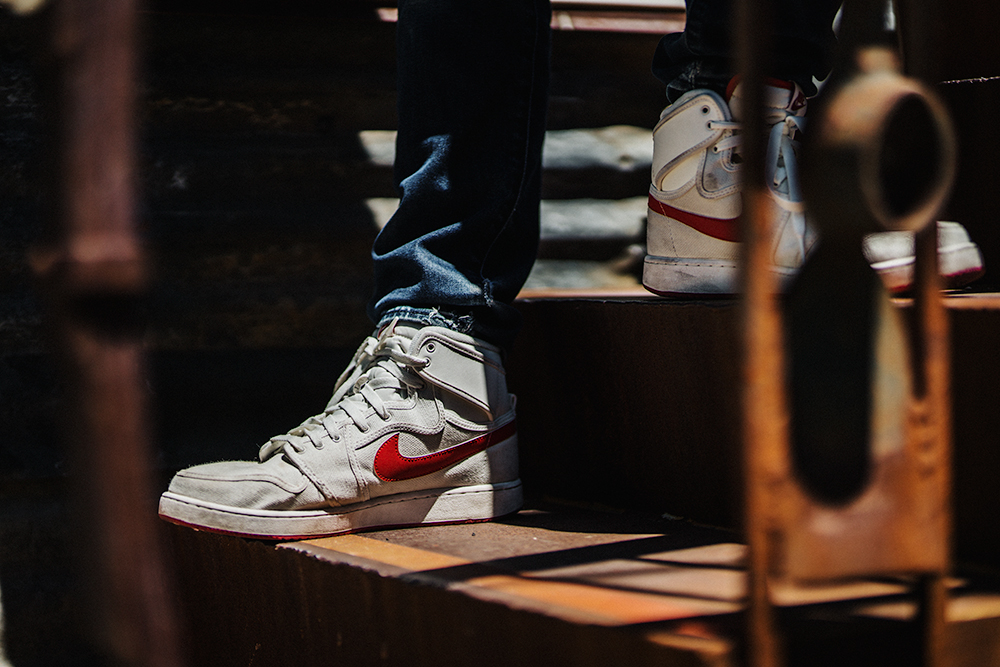 Jay-Z once told Vanity Fair, “When you’re accustomed to wealth, you don’t show it, right? That’s why the white kids in school could wear bummy sneakers; it’s almost like, don’t show wealth — that’s crass.” While times have certainly changed since Sean Carter was wearing Nikes in homeroom, his quote illustrates something important about the sneaker subculture: the role of sneakers as a symbol.

Any established community or group uses symbols as signals of group membership. Here in the Truckee/Tahoe region, locals have a host of signals that identify them: discussing “shoulder” season with the bartender, sticking that Truckee Love bumper sticker on one’s car, knowing it is a three-way, not a four-way, stop on Donner Pass Road, even the subtle pride in one’s voice when describing the housing search that led to living with seven people in a three-bedroom house. These are all “in-group” markers that designate someone as a local. Sneakers often serve a similar role as an identifier.

In the days of Jay-Z’s youth, sneakers were a marker of pride in one’s appearance among members of the lower class, and especially black communities. A nascent culture formed around early sneaker staples like Converse’s Chuck Taylors, and Nike’s Cortez and Blazer silhouettes. It was tied intrinsically to hip-hop and basketball, defining cultural movements in urban communities during the same time period. Consequently, it was Michael Jordan’s signature line that truly elevated sneakers to full-blown subculture when he signed a historic contract with Nike in 1984.
On the back of Jordan’s basketball preeminence, Air Jordans became a cultural force. The sneakers identified the wearer with their namesake, with basketball, with black culture; with pride, athleticism, and determination. The Jordan brand elevated Nike as well, and the popularity of sneakers in general rose across all sectors of society. Flashy shoes may have been considered “crass” once upon a time; before long, they were more aligned with sports than with class or race. Today, they are an outright fashion statement.

Now with 32 signature models and countless other versions, Air Jordan is hardly the only sneaker in a market no longer dominated strictly by basketball shoes. Alongside other signature basketball sneakers — LeBron’s line is perhaps the most popular of the past 20 years — lifestyle sneakers have gained tremendous popularity. Perhaps most tellingly, Kanye West has released designs with both Adidas and Nike that are so popular (and limited in release quantity) that they are regularly sold out within seconds of going on sale and are then resold for upwards of $1,000.

Alongside this growth in popularity, the intricacies of sneaker culture have expanded. Accelerated by the ability to form communities online — reddit’s /r/sneakers community boasts nearly a half-million users — an intricate set of language and behavioral signals has developed. Online communities praise “deadstock” pairs that have never been worn or even so much as tried on, as well as VNDS (Very Nearly Deadstock). “Beaters” are those that are for everyday use, ones you can wear in the rain, without concern for scuffing or creasing. “Grails” are, of course, the holy grail of any sneaker collector, often a hard-to-find personal favorite in both silhouette (model) and colorway (the color scheme). The very use of the word “sneaker” is in some ways a signal — seriously, don’t call my Jordan’s “shoes.”

Beyond the virtual world, sneaker culture takes on an even more peculiar signaling. People will go out of their way to acknowledge another’s footwear, making sure to name the silhouette and colorway to demonstrate their knowledge. My beater Jordan 3 Black Cements often attract comment — even here in Tahoe — despite their thoroughly worn state, because of the famed tradition of the “BC3.” I have watched people leap over puddles, desperate to keep the suede on their Nike Air Force 1’s clean, and indeed have done the same myself. Fathers may buy matching sneakers for their young children, spending hundreds of dollars for sneakers that will be outgrown in months. There is a recurring meme of men taking off their sneakers to make a marriage proposal, lest they crease their sneakers while getting on one knee.

The ubiquity of sneakers has certainly changed their connotation, no longer signaling race or class in the same way they once did. To be sure, sneaker culture is still deeply rooted in black and urban culture, but — much like hip hop and basketball — it has found popularity around the world. Yet, sneakers still are identifiers, and have a host of social signals associated with them, marking their wearers as collectors, connoisseurs, and part of the larger sneaker community. They are style first — nothing beats the extra hop in my step when I don a fresh new pair of sneaks — but the community associated with them has created a subculture that is more than a mere trend, but is here to stay.