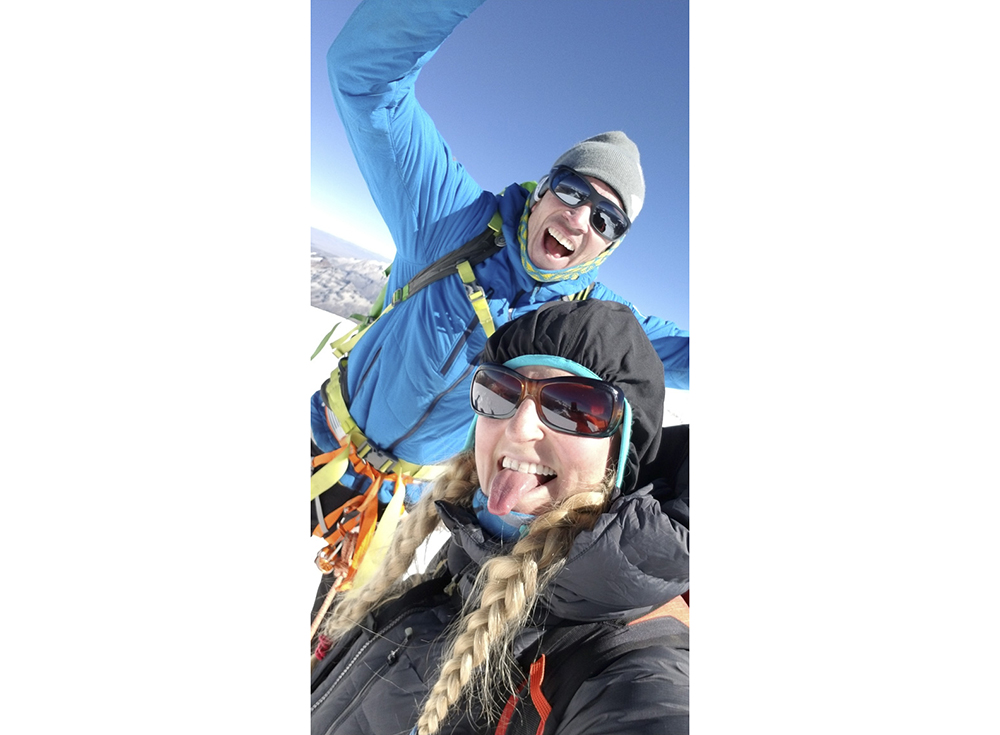 “Come on, Ab, you can do it, just trust your feet,” I shouted, tucking my chin into my jacket as far down as I could and breathing into my chest, trying to capture some of the warmth from my breath in my neck. The wind whipped around me without mercy, cutting into the deepest, most vulnerable parts of my psyche, shutting out the sound of my voice.

We were at nearly 17,300 feet altitude and 1,500 feet up on Sphinx, a 2,500-foot piece of granite in the Cordillera Blanca of Peru. My boyfriend, Adrian Ballinger, and I were doing a month-long “expedition” of sorts, involving rock climbing, ski mountaineering, and a little time spent at the beach kite surfing. We had come up with the idea while we were apart from each other this past spring, him climbing Mt. Everest without supplemental oxygen and me sport climbing in Spain. We wanted to go on a trip that was both adventurous and diverse, a fun way to explore Peru together (where I had never been), while still getting to do the activities we both enjoy.

We spend so much time apart on our own expeditions and oftentimes it’s hard to feel connected when having such powerful separate experiences. Going on a big trip like this that would challenge us and be fun was our way of reconnecting. We coined the hashtag #DateMonth and left Tahoe on July 1.

We spent the first week at a sport climbing area at nearly 15,000 feet called Hatun Machay. It was mellow and fun and we both got to climb our respective grades and acclimatize to the altitude. The following week we ventured to Esfingue with our sights set on a few lines, the first of which would be the popular 1985 Route. The first half of the climb went smoothly. We moved fast, with me leading every pitch — my expertise being in technical rock climbing — while Adrian followed, having had spent the last few months on Mt. Everest, which destroys all of one’s pure strength and is detrimental to rock climbing. He was just trying to find his bearings on rock again.

We had gotten off-route somewhere along the way, and were now in no-man’s land, lost and unable to figure out how to move up. I climbed up and down over 300 feet, searching for a way to gain the upper headwall, but each time the climbing proved difficult and dangerous. The rock was smooth as glass with very few cracks to place protection, thus creating a situation where a fall could be massive and cause serious injuries; not something we wanted to experience that far away from civilization. The sun had gone and the wind had picked up, causing some misery and anxiety about our predicament. We felt totally trapped, frozen, and flailing in a sea of granite, with not a clue which way to go.

I moved fast and confidently, smearing my feet on tiny crystals and using my hands only for balance, sometimes 50 feet above my last piece of protection. Despite the fact that I was afraid and cold, when I was actually climbing I felt proud. I was aware that just a few years ago, before moving to California and practicing the art of climbing on granite, even moving over easier terrain on such a wall would have been a complete horror-fest for me.

Adrian, on the other hand, was not as comfortable. He had not climbed all spring and was having trouble trusting his feet on the slippery granite. He was tense, shaky, and overly cautious, the frigid temperatures and his already cold-damaged toes were too numb to feel anything, making the entire experience that much more insecure. I did my best to be supportive and empathetic, but I’ll admit my shouts of encouragement came off impatient and annoyed more than once. Still, Adrian pushed through and kept climbing. Each time we gained ground we felt relief that it might be over soon. Before long, we might be warm. Eventually, we reached the summit, celebrated briefly, and were on our way down in the dark; crushed, but satisfied and happy. Fast forward another week, we were approaching the summit mushroom of Tocllaraju at 19,790 feet. The day was perfect; sunny and not a breath of wind. We brought our skis, but had dropped them 200 feet below to summit, because the last bit looked extremely firm and steep. An overhanging cone of perfect styrofoam snow lay ahead of us, with massive exposure below. Once again we were slightly underprepared, as each of us had only one ice axe, one ice screw, and one 30-meter 6-millimeter rope.

I felt intimidated by the exposure and insecure on the snow. I’ve done a fair bit of winter climbing, but I never feel confident or at ease with it. This time, Adrian was in his element. “Hey, it’s okay,” he said. “It’s like walking on a sidewalk. We are so safe. I promise.” And he quested off out of sight, winding his way around the snow cone feature, one ice screw between him and me. I followed carefully, cautiously, shakily, but reassured and grateful for his words. I thought back to The Sphinx and felt a pang of guilt for my impatience with him when he had been afraid. I should have known better. We summited that mountain, skied down, celebrated, and then we went to the beach. I think back to both ascents and I remember the climbing, the cold, the tiredness, and the satisfaction I felt from our achievements. But mostly I remember those moments of partnership we experienced. Whether you’re at your very worst or your very best, when put in uncomfortable and scary situations, having a partner who can understand and appreciate both is crucial for success and safety. Throughout our five years together, Adrian and I have tested ourselves and our relationship countless times through our mountain adventures, and each time, no matter what the outcome of the climb, we’ve become stronger for it. Our #DateMonth wasn’t just a vacation, but a time to have these meaningful experiences together and to push ourselves and our relationship into the realm we are both passionate about. We summited some peaks, did some skiing, and enjoyed some time on the beach, but more importantly, we had a great adventure together, and that’s what mattered most to us.