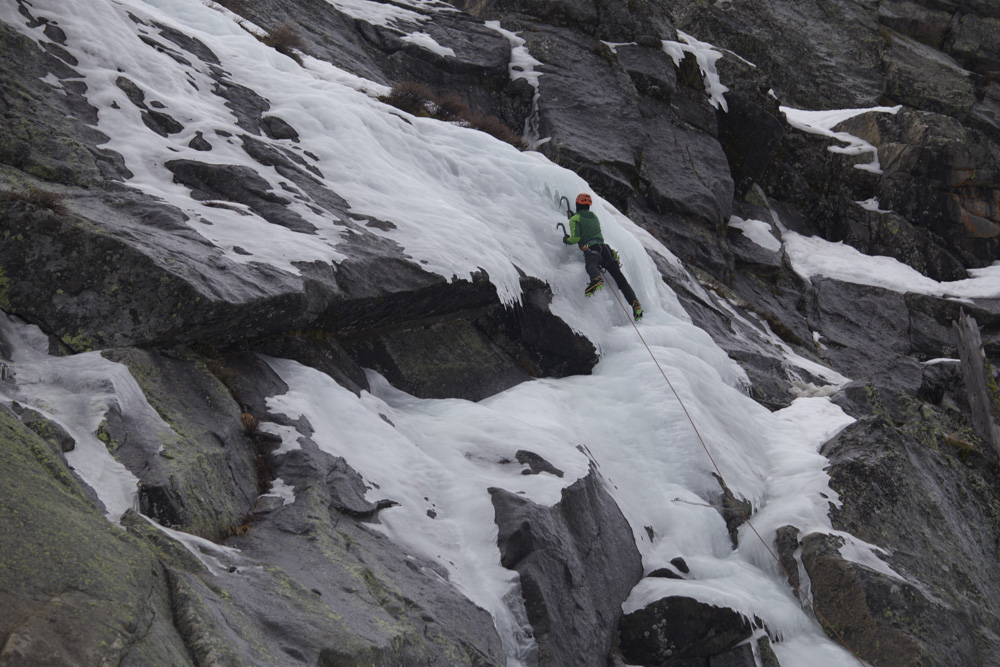 Scaling a glistening slab of vertical blue ice with only a few centimeters of steel crampon points and ice tools pierced into the frozen water, the going is slow, demanding, and dangerous. Nevertheless, a small legion of Tahoe ice climbers is dedicated to finding the small window when ice climbing takes hold in Lake Tahoe.

“Ice climbing can be extremely challenging, frustrating, not to mention dangerous, especially when beginning, and Tahoe is not a world class destination by any means,” said Logan Talbott, an Alpine Skills International (ASI) guide and ice climber with 15 years of experience. “But it’s a unique medium and people get hooked by the experience of climbing up something like the bizarre formations on a frozen waterfall.”

Ice climbing may be overshadowed in Tahoe by skiing and snowboarding, but climbers relish in finding yet another way to celebrate Tahoe’s dynamic landscape. Plus ice climbing typically improves when the skiing deteriorates and vice versa, so the potential for a conflict of sporting interests is minimized.

“I’ll ice climb more when the skiing’s not good,” said Brennan Lagasse, a professor at Sierra Nevada College, ice climber, and skier. “These recent seasons where we’ve had a slow start I’ve certainly climbed a lot more, and it helps get your focus on something super fun rather than dwelling on when it’s going to snow.”

Ice typically forms in Tahoe when there is a warm spell followed by a cold snap. When the temperatures rise, snow melts over rock bands and then freezes when the temperatures drop again. The dripping water turns into curtains of ice, which can then be climbed by those with the right know-how.

Climbs formed in this manner can be seen on the rock bands directly below Donner Peak. Frozen waterfalls, like Eagle Falls above Emerald Bay, also offer prime climbing. Climbers refer to both types of climbing as “water ice” as they are essentially frozen water, compared to alpine ice, formed by a different mechanism seen at higher elevations.

Fickle conditions generally define the Tahoe ice climbing scene, and when the ice is good it likely won’t stay for long. “There is amazing ice climbing to be had in Tahoe, but the joke is, it’s Here Today and Gone Tomorrow, which also happens to be [the name of] a really rad ice route that forms only on very rare and specific conditions,” said Lagasse.

Popular places to climb include Lover’s Leap, Cascade Falls, Coldstream Canyon, and off Donner Summit. Despite the dangers and the need for specialized equipment, Tahoe’s scene is open to beginners as there are many climbs that employ top-roping, a technique where the rope runs from the belayer though an anchor at the top of the route and back to the climber. This technique provides a higher sense of security for those new to climbing.

“Beginners really love the experience and to be able to ascend the ice,” said Talbott, who teaches first-timers through ASI’s Try Ice Climbing course taught at Donner Pass.

Ample snowfall last December set up good conditions for the climbing season to start in January, when Tahoe weather transitioned to a similar pattern seen the last few years with good ice climbing and low snow.

“Overall, Tahoe ice climbing is better than Jamaican ice climbing but worse than Canadian ice climbing,” jokes Todd Offenbacher, a guide for Ice Axe expeditions and a South Lake local for 20 years. “But we’ve had some great days this year with the deep freeze happening overnight forming thick ice.”

Like any outdoor sport, there is a heap of ice-specific slang. Plastic ice, or thunker ice, is what everyone wants. It creates a “thunking” sound when plunging a pick in, and doesn’t fracture or crack. Dinner plate ice, however, is highly dangerous, and refers to brittle ice that shatters like porcelain when a force is exerted on it. Chandelier ice refers to the fluctuating and ornate 3D shapes that can form on a wall.

To promote the scene in Tahoe and offer a gathering of the ice climbing community, the American Alpine Club hosts an annual climbing weekend based out of Lost Trail Lodge in Coldstream Canyon between Truckee and Sugar Bowl. This year turnout was low, with only around 10 attendees compared to a norm of 30, though plenty of climbing was still had.

Climbing offers a communal aspect, the chance to solve the technical puzzle of climbing a route, and cross-training benefits for other winter sports. Dave Campbell, the dealer services manager for Nidecker, a company that includes Jones Snowboards, says his main draw to climbing is how it prepares him for ascending big-mountain lines.

“Ice climbing is a great activity for lulls between storm cycles in Tahoe. With the safety of a rope, it is a great sport for improving snowboard mountaineering skills because you can expand your comfort zone and learn what your axes can do while practicing in a relatively controlled environment,” said Campbell, who in 2014 climbed and snowboarded down a 23,000-foot peak in the Kunlun mountains of China.

Campbell also likes ice climbing for its meditative aspects and doesn’t seek the adrenaline rush common in many outdoor sports. When he finds his rhythm on the ice he is in tune to the overall movements of his body.

“Climbing trains us how to tap into a very intense level of focus, and to transfer that energy into other parts of our lives,” he said. “I don’t think of it as an extreme sport, but more like yoga done in a very surreal setting.”