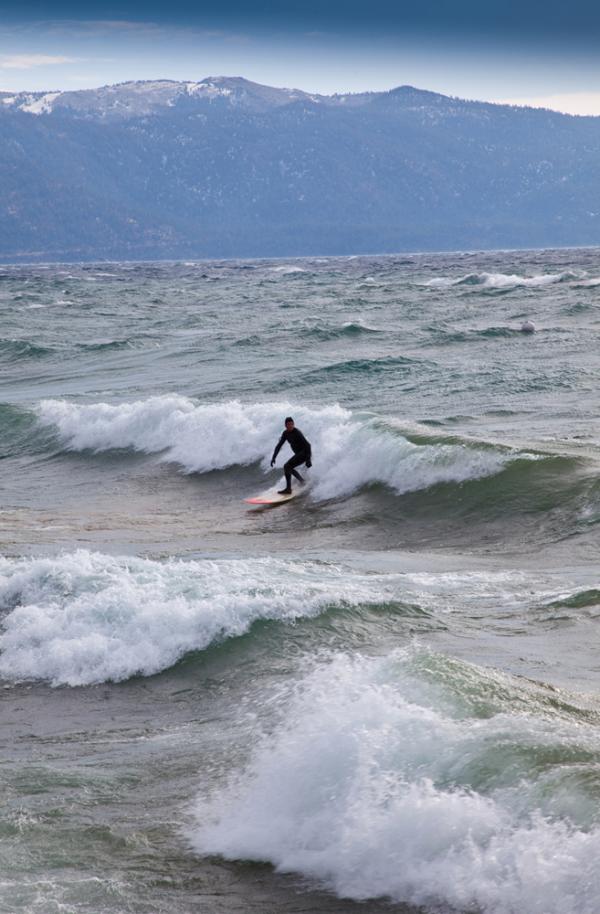 THE NATIONAL WEATHER SERVICE IN RENO HAS ISSUED A LAKE WIND ADVISORY FOR LAKE TAHOE… WINDS: SOUTHWEST 35 TO 45 MPH WITH GUSTS UP TO  80 MPH. WAVE HEIGHTS: 3 TO 6 FEET. HIGHEST WAVES ON THE NORTHEAST SHORES FROM KINGS BEACH TO ZEPHYR COVE.

Sounds like another pleasant day on Lake Tahoe! Wind advisories may be a death wish for Chris-Crafts and catamarans, but for a growing group of local surfers the gale-force conditions are a god send. When strong sustained winds from the south or southwest whip across the 22-mile length of Lake Tahoe they often create a decent wind swell that fires legit sets of waves at a handful of North Shore surf breaks. While no one is getting barrelled in these maybe waist-high breakers, the thrill of popping up and catching even a short ride on Big Blue is a truly rarefied freshwater experience.

Surfing on Tahoe is nothing new as a legion of locals have been paddling out into the teeth of ferocious storms for decades.

Local ski/shred icons like Tom Burt, Jeremy Jones, and Scott Gaffney are among that contingent of surf die-hards, which gives a little perspective on the type of person chasing these elusive North Shore sets. You could say ‘dedicated’ or you could say ‘demented,’ but either way, just paddling out into the 40-degree water with a freezing windchill nipping at your nose takes serious gusto, let alone hanging out in the frothing ice bath and groveling for 10-second rides. Tahoe surfers usually have a profound energy connection with the Sierra. Or so it seems. There’s got to be something metaphysical happening in the heads of these hardcore to keep them bobbing offshore in the midst of a tempest.

The ecstatic bliss of catching a wave on Tahoe is no doubt the carrot local surfers are chasing. It’s an exquisite buzz that’s directly related to the suffering, waiting, and skills that the pursuit demands. Relative to surfing in the ocean, Tahoe presents a complex challenge as the wind swell does not produce many clean sets and it’s often difficult to gauge the size of approaching waves due to the chop and white caps. Once you’re aligned with the breaking wave, the difficulty becomes catching it quick because the waves are usually only powerful enough to support a surfer on a short board for a brief ride. To make the most of the maneuverability of a regular surfboard you need to pop up and attempt to snap a turn immediately.

Between the rarity of the prime surf conditions and the difficulty of the task, it comes as no surprise that more than a few longtime surfing locals have taken up stand-up paddleboard surfing on Tahoe. Piloting a stand-up paddleboard into the surf substantially changes the rules of the game as the flotation and glide of the bigger board allows you to ride smaller waves and catch them significantly farther offshore. Standing up out of the water also allows a higher vantage point for identifying approaching sets and should keep you warmer than being submerged unless the wind chill is colder than the water that day.

‘You’re not going to be whipping the board around but you can work the peelers and crumblers and end up with three times as many rides as you would have gotten on a regular surfboard,’ Tingle says. ‘The only hurdle is that the wind can make it difficult to stand up.’

Tingle also mentioned the improvements in performance SUP boards that have a specially contoured bottom to improve glide in the surf. These boards are also quicker maneuvering, which can help you make last minute positioning adjustments to line up waves. Don’t expect to effortlessly flick turns, however; even these performance models are at least nine feet long for the average-sized rider.

Whether you’re mashing on a short board or longboarding on a stand-up, the common challenge both disciplines face is finding where the best waves are breaking for that particular windstorm and time of the year. The lake level dramatically affects wave dynamics so the same spots don’t break all year. Some of the more reliable locations are Agate Bay, Incline Beach, and Sand Harbor, but even these spots are famously fickle and often blown-out.

If you’re game to give high-elevation surfing a try, your first step beyond securing a proper board is to get equipped with a hooded, cold-weather wetsuit, booties, and gloves. Most years there are only a half-dozen prime opportunities to surf on Tahoe and a majority of those storms come through in the fall and winter. You’ll want to be prepared to paddle out through rain, sleet, or snow if you’re trying to make the best of every swell. Rogue wind events without any associated moisture do roll through occasionally but a better bet is to wait until just after the precipitation has stopped and the wind is still howling.

For more info on Tahoe surf culture, bookmark the blog Surf 6200. The website features local surf media, tracks wind advisories, and has links to well-positioned web cams focused on known breaks. Click surf6200.com/nv to get on board.