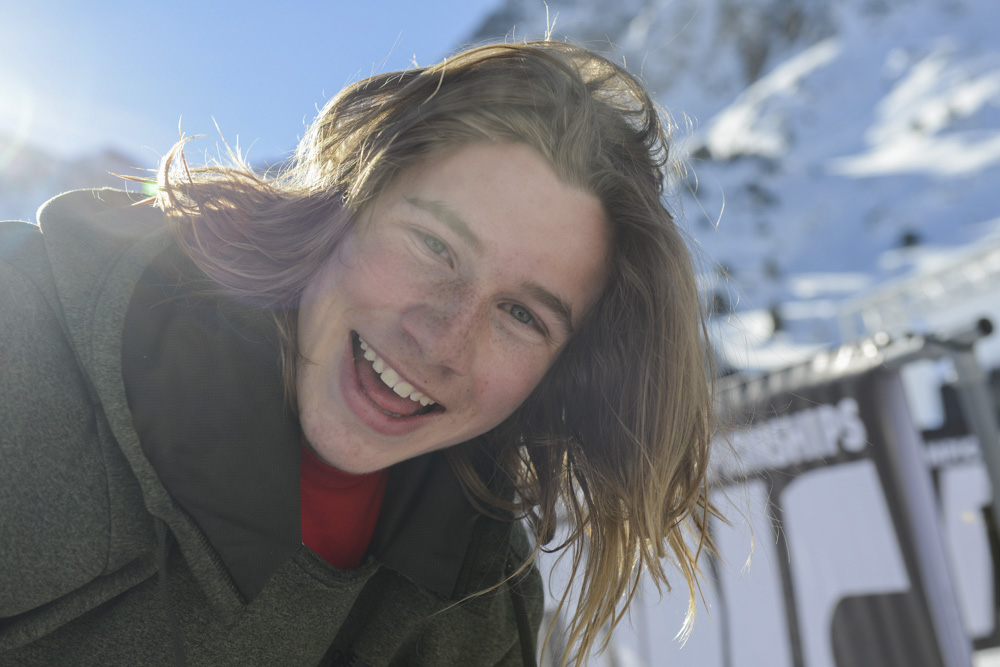 For any 16-year-old, the normal pressures of life run aplenty: awkward school dances, piles of homework, chores, the quest for a drivers license, and so much more.

But Dylan Zellers of Truckee adds to that a competitive big-mountain snowboarding career that includes being the International Freeskiers and Snowboarders Association junior champion (ages 15 to 18) in 2014, and winning the Junior Freeride World Tour (JFWT) championship event in Andorra in February 2015, the latter being the highest level junior freeride event on the planet. And he is still hungry for more.

“I love meeting new people, seeing different places, and expanding my view of the world,” said Dylan, who rides for Jones Snowboards.
His enthusiasm for taking in the world can even set him slightly off course at times. During the JFWT trip to Andorra, with the venue set on a 2,000-foot powdery face peppered with cliffs, he was so busy taking in the sights of his first trip to Europe that he almost forgot he was there for a competition.

However, when it came time to prepare for the event, he exercised full dedication.

“It took a lot of hours looking over the venue and realizing what the snow was like and how big the cliffs were,” said Dylan. “I pretty much memorized the whole venue to the point where when I was sleeping I envisioned every single cliff.”

During his run he rode a steep, wide chute before accessing a small cliff band that included several medium-sized drops before flowing into the finish.

Being the son of big mountain snowboard pioneers Jim and Bonnie Zellers is also a catalyst to his success. Jim has made numerous snowboard first-descents including Alaska’s Mt. McKinley in 1991, and in the ’90s Bonnie played a significant role in accomplishing first ascents in the mountains of Valdez and Juneau. It’s no surprise, then, that Dylan was only 2 years old the first time he rode a board.

“They really gave inspiration,” said Dylan of his parents. “They helped me to excel and get to the point where I am.”

The Zellers thrive on inspiration, family values, and travel. “We try to push hard on celebrating the earth and the seasons,” said Jim.

Bonnie also encourages the idea of travel to further expose Dylan and his brother Ryan, 14, to the world. The family has a conference each year where they make a list of where they want to go. “We come to consensus based on what everyone’s input is,” said Bonnie. “Sometimes it will take a year or two to get all of us to a place we want to go.”

Dylan is a member of the Squaw Valley-Alpine Meadows Freeride Team, which has helped him to refine his skills on the two mountains, even during the last four years of reduced snowpack in the Sierra, something he chooses to make a positive.

“In a way I look at it as a hidden blessing. You have this change in the snow not like anywhere in the world and it really helps me to read the snow,” said Dylan, referring to conditions that range from soft to icy to powder to wet snow.

This attitude helps set him apart from other riders. Adam Ryan, Dylan’s freeride coach of four years, has watched him mature into a more fluid and calculated rider.

“He never has anything negative to say,” said Ryan, who defines Dylan’s riding style as having flow, aggressiveness, and fluidity. Ryan was impressed with Dylan’s winning line in Andorra because he was able to navigate turns with finesse while remaining stable and focused.

As far as his future in snowboarding, Dylan sees many paths. He says he could see himself teaching snowboarding, going for the professional competition route, or even becoming involved in product development to help advance the freeride industry.

But wherever the path may lead, his eternally positive attitude will add fuel to his already widespread success.