Home Sections Sports and Outdoors A New Buzz In the Air 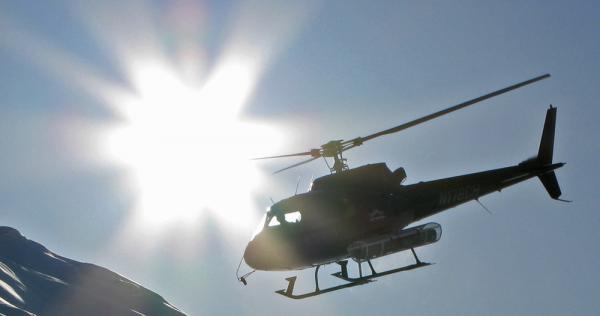 Pacific Crest Heli-Guides, in conjunction with HeliTahoe, has recently announced plans to offer heli-skiing and snowboarding for the 2010–11 winter. Flying out of the Truckee airport, the operation hopes to be the first successful Sierra heli-skiing enterprise ever and a new luxury amenity for Lake Tahoe.

PCHG is the work of ski entrepreneur Dave Rintala, owner/operator of Pacific Crest Snowcats and a partner in Alaska Backcountry Adventures, a heli-skiing service in Valdez, Alaska. Rintala has been dreaming of a local heli-ski operation for quite some time, but the stars just recently aligned to make it happen. The key puzzle piece was securing an agreement to use a 100,000-acre swath of private land in a remote region northwest of Truckee.

‘We’ll be flying well off the beaten path in an area that doesn’t see a lot of use,’ said Rintala. ‘The zone is west of Mt. Lola and Castle Peak and south of the Sierra Buttes in the ‘checkerboard.’’

The earmarked terrain includes a wide variety of features including bowls, trees, chutes, and couloirs, many of which have never been skied before, according to Rintala. The possibility of scoring a first descent plays well into PCHG’s plans to offer a unique guided ski adventure unlike anything else around.

That said, you can expect to pay rather dearly for the experience. Full day rates will start at $899 with a customizable price structure based on flight time. The operation will be limited to 16 guests per day with a ratio of one guide per four guests.

Heli-ski operations are often foiled by bad weather, but PCHG hopes to avoid such issues by dovetailing cat skiing opportunities into the scheduling mix. If the helicopters are grounded, guests with reservations will be able to ski with Pacific Crest Snowcats instead.

To avoid conflict with the few backcountry users who still might access the intended terrain, Rintala said his heli-guides will be ordered to steer clear of any other snowmobilers, skiers, or wildlife spotted on a given day.  PCHG will also have a hotline for people to call up and let them know where they might be in the area ahead of time.

Though Old Man Winter will ultimately decide the fate of PCHG’s first season, Rintala is no doubt thrilled at the prospects of this ambitious new local adventure opportunity.

‘The addition of a helicopter skiing operation to the region allows Lake Tahoe to position itself as a complete winter destination on par with locations such as Whistler, Jackson Hole, Utah, and Colorado,’ said Rintala. ‘Pacific Crest Heli-Guides looks forward to being part of the ultimate Lake Tahoe skiing or snowboarding experience.’

A New Buzz In the Air
Sports & Outdoors / Wellness

A New Buzz In the Air
Sports & Outdoors

A New Buzz In the Air