The possibility of prolonged power outages will loom large in Truckee this summer, as public utility officials seek to mitigate the threat of wildfire. With this in mind, the Truckee Donner Public Utility District is trying to get the word out, asking residents a single question: Are you ready?

What must you do? First, according to Steven Poncelet, TDPUD public information officer, it’s wise to ensure the PUD has your correct contact information on file, which can be verified through the My Account tab on at tdpud.org. Customers can also sign up for email and text alerts through the website, and by texting TDPUD to 333111 to receive emergency Nixle alerts. If an outage is anticipated due to extreme fire danger, TDPUD will attempt to notify all customers between 48 to 24 hours and 12 to four hours before the outage.

Poncelet said that while PSOMs for the Truckee region are “a somewhat new phenomenon only coming to the forefront in the last few years,” similar programs, such as Public Safety Power Shut-Off (PSPS) for California Investor-Owned Utilities, have existed for over five years.

It’s also important to understand why we may experience periods of lengthy power outages. It should be noted that TDPUD does not generate power locally and is transmission-dependent on NV Energy, which has in place wildfire safety mitigation practices to reduce the risk of electric utility equipment being the ignition sources of a catastrophic wildfire.

Should these automatic switches sense a fault, they are programmed to open or stop the transfer of energy. According to a recent press release from the district, when a fault triggers the recloser, it waits a set time and then closes, or restarts transmission, to test the line. If the fault is gone, the recloser stays closed, and while there is no extended outage, the customer may experience a momentary outage, which is also called a blip. If the fault still exists, the recloser will stay open, transmission will halt, and an outage will occur.

While reclosers have greatly improved TDPUD’s electric system reliability, they have the potential to contribute to wildfire ignition when a branch remains in contact with a line during the re-energization process. In wildfire season, the TDPUD disables this capability for the recloser to reset itself, in the interest of safety and preventing electric equipment from causing wildfires, Poncelet said. This practice does not increase the number of faults; however, it can lead to outages with longer durations to allow for physical inspections of circuits during wildfire season, which is generally June through November.

Unlike planned power outages, which typically have a known start time, duration, and purpose (such as for repairs, maintenance, or upgrades, Public Safety Outage Management (PSOM) blackouts are anticipated outages based on a future projection of wildfire risk, according to Poncelet. Such outages “may or may not occur up to the moment that NV Energy decides to de-energize transmission to Truckee,” he said.

“NV Energy’s PSOM program is entirely at the discretion of NV Energy and the Public Utility Commission of Nevada,” Poncelet noted. “NV Energy does have sophisticated weather and fire risk modeling that considers key inputs such as wind speed, humidity, and fuel moisture.”

There has also been recent talk of the possibility of widespread power outages throughout California due to strains on its power grid. Such outages are not related to PSOMs in place for wildfire safety, however. And even though TDPUD’s power comes from NV Energy, not the state of California’s electric system, it doesn’t mean that its customers are entirely in the clear.

“TDPUD is not connected to California’s electric system in a meaningful way and [is] transmission-dependent on NV Energy, which operates outside of California’s electric grid as well,” Poncelet said. “It is well documented that California does not have sufficient electric resources to meet the state’s demand and the California Independent Systems Operator, who operates the California grid, has warned of widespread power outages due to a lack of electric generation resources. While NV Energy (and thus TDPUD) are not directly impacted by the shortages in California, the impacts of California seeking to buy critical resources from outside the state, along with a very bad hydro-electric year due to the drought, have created electric resource adequacy concerns for all.”

Regardless of which type of power outage could be looming, TDPUD wants its customers to be prepared.

“While wildfire safety de-energization programs appear to be here for a while, it is hoped that increased vegetation management near and around electric utility equipment and the reduction of fuels by both public and private property owners would eventually make the practice obsolete,” Poncelet said. 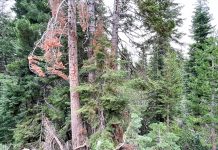