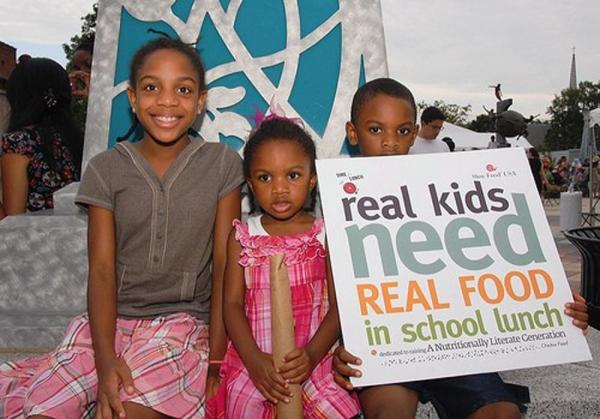 (Editor’s note: The author serves on the board for Slow Food Lake Tahoe.)

On Sept. 7, 10 people gathered at Susan Brumm’s Truckee home to share a meal of homemade vegetable quiche, corn muffins and apple bread. This may sound like any other Labor Day gathering, but there were two things that made it different: Brumm’s guests didn’t come to her house just to eat; they were also making a statement. Across the country, 20,000 other people were doing the same.

The cause: getting real food into schools.

The event, called an Eat-In, was organized by Slow Food USA, the non-profit organization and grassroots movement dedicated to spreading the word about good, clean and fair food (healthy food, a clean environment and fair treatment for farmers).

Billed as part potluck, part sit-in, the Eat-Ins were part of Slow Food’s Time for Lunch Campaign’s National Day of Action to get Congress to update the Child Nutrition Act this fall. The event coincides with the organization’s donation-based September membership drive.

The Child Nutrition Act, which governs the National School Lunch Program and sets the standard for the food that more than 30 million school children eat, is a federal law that is up for reauthorization this month. In the last few decades, as school budgets have been cut, schools have struggled to serve children anything but overly processed food. For many children, school lunches are their only guaranteed meal of the day, yet those meals are contributing to higher rates of obesity and diabetes among children.

‘Children are forced to choose between going hungry or being unhealthy,’ Slow Food USA’s Time for Lunch policy platform states.

‘We want to show Congress that a lot of people across the country are concerned about the processed food served to children, especially in school lunches,’ said Brumm, Slow Food Lake Tahoe’s new president.

The response to the Time for Lunch campaign has been huge. There were 300 Eat-Ins held in all 50 states, surpassing Slow Food’s goal of 100. The organization is also circulating an on-line petition to give to Congress. They had hoped to get 20,000 signatures from people who support Slow Food’s platform to bring real food to schools. By Labor Day, 30,000 people had signed the petition. The organization has now upped its goal to 50,000 signatures.

‘In the past we had quiet change happening in communities, but we want to be loud now,’ said Kate Krauss, Slow Food USA director of development. ‘Today is the day we shout ‘We want change!’’

To capitalize on the momentum and interest generated by the Time for Lunch campaign, Slow Food USA had the idea to remove its $60 membership fee. For the month of September only, people can pay any amount to join the organization.

‘We are trying to create a social movement,’ said Krauss. ‘We need a big base coming from all parts of society. We were leaving out a group of people who couldn’t afford the $60.’

With $35 being the average donation this month, Slow Food USA has a good idea of what is an affordable fee.

Despite the high price to become a member, Slow Food’s membership has increased over the last year. It currently has 18,000 members, up 2,000 from one year ago, and it gained 30 more chapters for a total of 200.

Brumm hopes that Tahoe-Truckee residents will take advantage of the membership drive to join an organization that is working for positive change throughout the nation.

Slow Food Lake Tahoe currently has openings on its board and committees for those interested in its mission. slowfoodlaketahoe.org or call Susan Brumm at 530-582-7498. For more information about Slow Food USA and its membership drive, go to slowfoodusa.org.

~ Discuss this article with the author, email msiig@moonshineink.com.