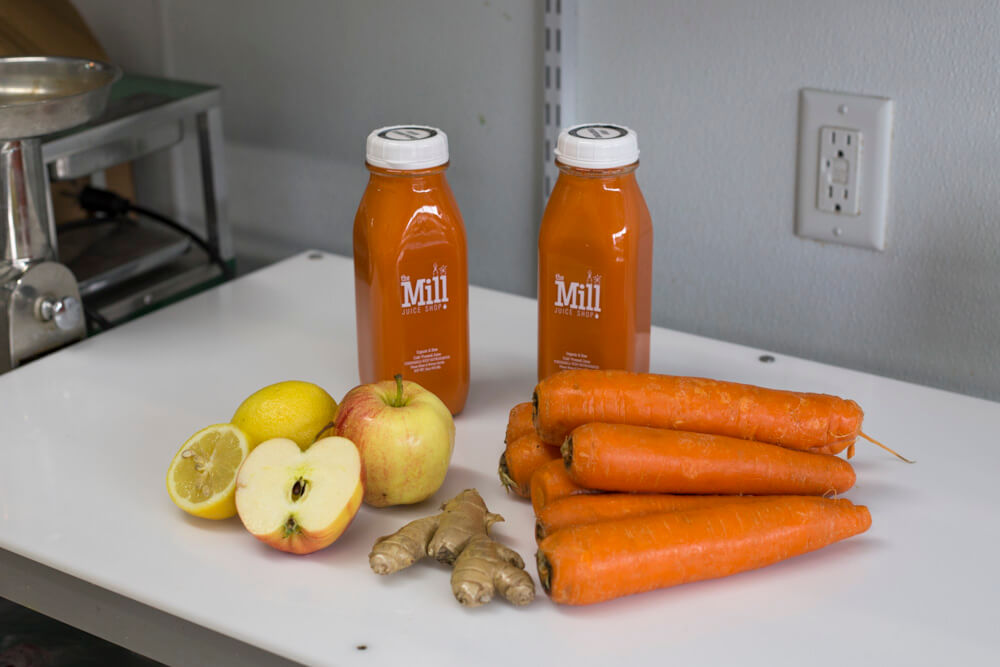 “Should we do a shot? This is my new bar!” exclaimed a jubilant yogi, fresh out of class and eager to take a shot with the owners of The Mill. But unlike a bar, The Mill doesn’t serve vodka or whiskey — it’s a juice shop. Still, there’s nothing like taking an invigorating shot of freshly pressed ginger juice, eyes watering and body feeling alive in the wake of some spicy goodness, to kick off the afternoon.

Officially a year old as of April, The Mill Juice Shop is Tahoe/Truckee’s only business focused solely on juices. The menu also offers nutrient-packed smoothies, granola bowls, hot beverages, espresso drinks, and homemade nut milks, all of which lure customers into the storefront in Truckee’s Pioneer Center. While it may seem surprising that a juice shop can thrive in Truckee’s economy (and right next to Full Belly Deli, no less), The Mill counts March and April 2015 as its busiest months of operation ever, and is opening a second location in Reno as soon as August.

From green juices like Maggie’s Farm (kale, celery, cucumber, ginger, and lemon) to detoxifying blends like the spicy Jumpin’ Jack Flash (lemon, cucumber, ginger, agave, and cayenne), The Mill crafts cocktails for every health and diet desire, all of which come in reusable glass bottles that get you $1 when returned. Also on the menu is a juice, raw soup, and nut milk detox program, plus a variety of intriguing elixirs served up in shot form, like ginger, fire cider, and the 65-vitamin toting blue/green algae.

Juicing serves a power-punch of nutrients, vitamins, and minerals from fruits and veggies, but many home juicers actually heat the produce and cause oxidization, killing and weakening some of the nutritional content. That’s why The Mill relies 100 percent on cold-pressing, which preserves all the good stuff inside by masticating the produce and then pressing all of the juice out of the pulp using two metal plates.

“With this process all the enzymes are still alive. I taste minerals in our juice; you can taste the lemon bite on your tongue,” said Megan Petrilla, who owns The Mill with her partner Ben Wolcott. “We have a lot of cancer patients and people with medical conditions that say, ‘I’m so glad you’re here, you’ve helped me so much.’ That’s the whole reason I do this.”

At the heart of the business is just that, hearts joined by love for each other and for juicing. Owners Petrilla and Wolcott met in New York City in 2009, both in the throes of fast-paced city lifestyles. After learning of the benefits of juicing and receiving a juicer from her boss, Petrilla was immediately hooked. And once Wolcott started drinking juice, he had surprising amounts of energy throughout his 7 p.m. to 6 a.m. bartending shifts. The couple dove into the world of juicing, began developing flavorful juice combinations, and in 2013 decided it was time to leave New York and return to Petrilla’s roots in Tahoe (she grew up in Incline Village).

“We were out here visiting four years ago; there are so many athletes and local businesses are so big here, I couldn’t believe there were no juice shops,” Wolcott said.

“For our first year, about 80 percent of our business was local and it kept us rocking through the winter. People that know we’re here make a trip to the Pioneer Center to stop by.”

With Petrilla focused on retail, computer and social media, and front-of-house, Wolcott arrives at the shop daily around 3 a.m. and juices until 10 or 11 a.m. He juices each ingredient separately, then mixes and bottles the individual cocktails, five regulars and a couple specials, with help from Petrilla. Wolcott enjoys educating people about juicing and that slow juice takes time; he even drew an informative cold-pressing diagram for the shop. Petrilla loves working with local farmers and produce distributors like Veritable Vegetable (which lets you specify how far away you’re sourcing from), Tahoe Food Hub, and Produce Plus, and catering the menu to the seasons.

“One of the best parts about this is the fact that we can work together every day, and then go home and love each other,” Petrilla said. “And that we’ve been given this chance to work really hard and make it ours … [And] the love and support that Truckee and Tahoe has given us.” 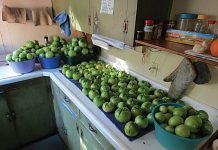 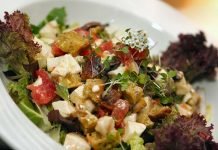 You Say Tomato, I Say Gazpacho