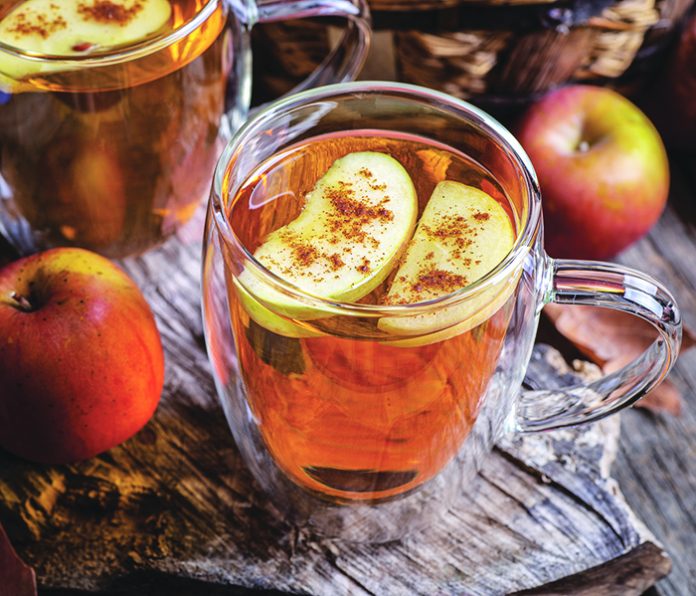 As I gaze upon the ambling Truckee River from my office window here at Moonshine, the sun is shining and a brisk breeze is swirling leaves of gold and amber all around. If I step out onto our Tiny Porch, I can actually smell fall on the crisp air. This time of year, the only thing better than the fragrance of fall outside is the aroma of autumn inside!

I delved deep into the family archives to share a few selections that will welcome you home with scentsational smells as you walk through the door and will even warm your bones while you toast your toes by the fire.

The first two come from the Demarest Farm 100th anniversary cookbook, compiled in 1986 and filled with recipes from the Demarest family, longtime customers, and old friends. If you’re feeling ambitious, stir up a batch of my “fairy” godmother’s apple pie “moonshine.” The recipe makes around 7 quarts, so there’s plenty to share with family and friends for the holidays. And chocoholics, there’s a little something for you, too!

Put all ingredients in a crockpot. If desired, tie whole spices in cheesecloth or put in a tea strainer. If spices are added loose, strain before serving. Cover and set on low for 2 to 8 hours. Serve from crockpot with a ladle. For a more lightly spiced flavor, use 1 gallon of cider.

Combine ingredients in pot. Heat, but don’t boil. Put 1 ounce of rum in each serving cup. Pour the hot cider concoction over the rum. Place one cinnamon stick in each mug.

In large pot, combine apple cider, apple juice, white sugar, brown sugar, allspice, and nutmeg. Add cinnamon sticks. Bring to a boil for about 5 minutes, stirring to make sure sugar is dissolved. Remove from heat and let cool. Skim any sediment off the top.

Pour through cheese cloth into another pot. Add Everclear, stir, and pour into jars. Drop one cinnamon stick into each jar. Remove cinnamon sticks after three days. Makes enough to fill three half-gallons plus a single one-quart canning jar, or seven individual quart jars. Delicious served hot with a scoop of vanilla ice cream, in a cup of hot tea, or even on the rocks.

Preston Lillo, of Sweets Handmade Candies in Truckee, shared with Moonshine Ink a sweet-tooth-satisfying hot cocoa recipe that will send the soothing scent of chocolate wafting through the air. A simple recipe, said Lillo, “would be something like 2 parts cocoa, 3 parts sugar and mix with any milky liquid you prefer,” whether it’s from a cow, nuts (almond), beans (soy), or grains (rice). For sweeteners other than sugar, feel free to substitute maple syrup, honey, or agave nectar. Lillo suggests starting with a lesser amount than you would use for sugar, sampling the combination as you go, and adding a little more at a time according to taste. The trick here is to serve with a peppermint stick — or a candy cane come the holidays — which will infuse a smooth, minty flavor into the steaming mug of hot cocoa. And don’t forget to add a generous dollop of whipped cream on top because, well, what’s hot chocolate without whipped cream? For those looking for a little extra kick with their cocoa, a dash of peppermint schnapps will do the trick.

Main Image Caption: SPICE IT UP: Allspice, nutmeg, and cinnamon lend a mild spiciness to a batch of warm apple cider. Garnish with a few fresh apple slices and a sprinkle of cinnamon. Chas53/bigstockphoto.com