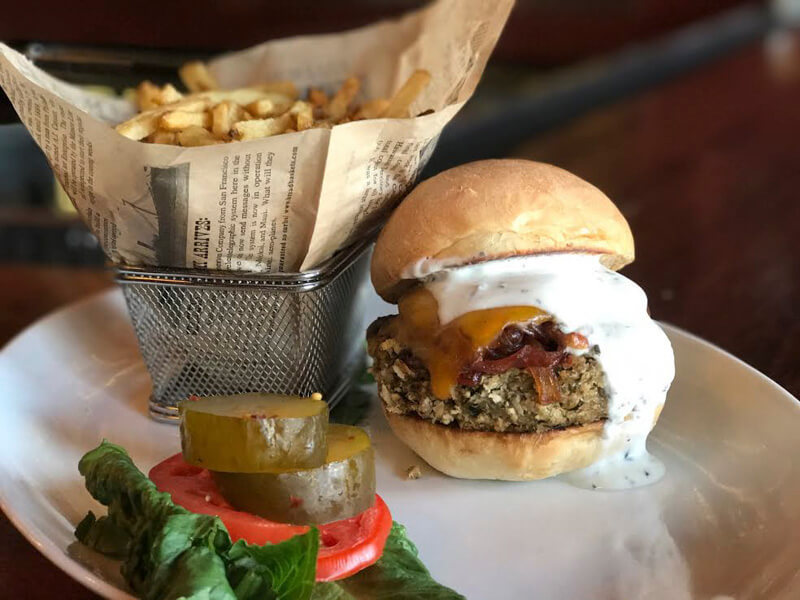 The veggie burger — oh, the oxymoron that is the veggie burger. What first started as the dry and crumbly step-brother to an American classic has morphed into a staple for both carnivores and herbivores alike. Now, don’t be fooled, many veggie burgers are still relatively “meh” with a soy or potato base and, really, not many other forms of substance, but we took to the streets and found three meat alternatives in Truckee/Tahoe that stood out among the rest.

Our three taste-testers come from a variety of non-meat-eating backgrounds — Lauren stopped eating meat in 1991 and has basically been a text book vegetarian ever since. She experimented with veganism for one year in college but it wasn’t for her. In the last 5 years she has added fish to her diet. Abby only eats meat on very special occasions like hiking to the top of Machu Picchu and craving a meat stick. Jamie is the resident meat-eater of group, so we wonder if she opted to secretly add bacon. Regardless of their preferences, we can honestly say these ’Shiners know what they’re talking about when it comes to picking a good meal. Take it from us, or try one for yourself and decide. ~ AG

Thick, soft, and packed with protein from its lentil base, the homemade veggie burger from Moody’s Bistro, Bar & Beats is a symphony of herbivore flavors. The veggie and legume constructed burger patty conducts an orchestra of different elements in perfect composition. In harmony with the patty is a lightly toasted bun, a healthy pile of red onions that are pickled to perfection, thickly sliced dill pickles, and cheddar cheese melted on top. But what really makes this burger sing is — drum roll please — the sauce! Drizzled over the whole enchilada, pickles and all, is a homemade herb yogurt sauce. This creamy delicacy is the kind you write home about, and pulls all the elements into one tasty bite after another. Maybe if you ask nicely, your server might even put some extra sauce on the side for your fries … but don’t mention we told you. ~ AS

Since the first week Burger Me! opened in 2008, its veggie burgers have been my all-time favorite — they’re thick, moist, and, most importantly, flavorful. Their diameter overflows the edges of the buns by nearly an inch, and are homemade from kidney beans, oats, mushrooms, spinach, roasted red bell peppers, basil, garlic, olive oil, and salt and pepper. You can order them on a white, wheat, or gluten-free bun, naked, or in a lettuce wrap. Basic included toppings are lettuce, tomato, pickles, and house Thousand Island dressing. Grilled onions are a free option (and necessity, in my opinion). For an additional cost one can add melted cheese ($.75), mushrooms, avocado, fried egg, and sauerkraut ($1/each). For the not-so-strict vegetarians, defeating the purpose of the veggie burger, add bacon or turkey chili. The key condiment that can truly make or break my Burger Me! veggie burger experience is barbecue sauce. Most importantly, don’t forget a handful of napkins because if you load up on the extras — my favorites are Swiss cheese, mushrooms, and avocado — you may have an out-of-body experience so intense that you think you’re being featured in the latest iteration of the “Don’t bother me, I’m eating,” Carl’s Jr. commercials. ~ LS

As a meat-eater I jumped into the veggie burger craze only because my foodie friends are constantly tweaking their secret veggie burger recipes. Now, I am veggie burger snob, and using my acquired taste, I tried Bar Jay’s, a brand-new gourmet diner in Incline Village.
Sitting close on the menu to a locally sourced burger from Bently Ranch, the veggie burger is created in-house by owner Oscar Jenkins. Just like my granola-crunching friends, Jenkins is enthusiastic about his homemade patty, a recipe he is constantly altering. The burger is black-bean-based with an assortment of ingredients including onion, bell pepper, celery, cayenne pepper, and Cholula hot sauce. The four-ounce patties are then pan-fried in olive oil with provolone cheese, a secret sauce, and caramelized onions melted on top and served on a freshly toasted sesame seed bun. The burger passes my test. The patty and the toasted bun complement each other nicely, while the fixings of lettuce, tomato, and pickle add crunch and extra flavor. The ultimate veggie burger test is its ability to hold its own. My only grievance was that the patty lost its shape and integrity during the meal, forcing me to use a fork and knife. ~ JW