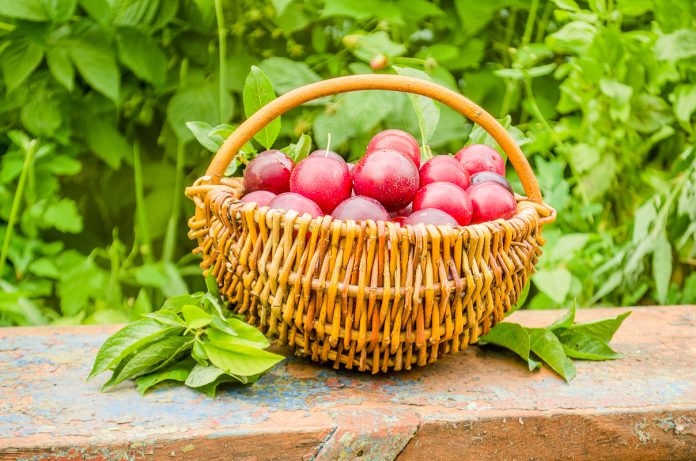 Oh, the hard-pitted plum. So juicy, so delicious, so … fickle! Is it purple? Is it red? Is it tangy? Is it sweet? As far as taste goes, it’s a bit of both. Once you bite through the tangy, thick skin, your tastebuds will be greeted with a sugary sweetness that will satisfy any sweet tooth.

With an estimated average of 30,000 growing acres of plums, California growers supply more than 70% of the nation’s plum crop, of which approximately 90% are grown in the southern San Joaquin Valley region. There are two main varieties of plums — the European and Japanese — available in grocery stores and farm markets.

If you’re craving a fresh plum to sink your teeth into, the Japanese variety is what you’re looking for. The Japanese plum, according to a UC Davis report on California prune and plum production, accounts for most of the fruit sold as plums on the fresh markets. With a yellow or pale red skin, they’re sweet and bursting with juiciness. Their natural sweetness makes them the perfect addition to any dessert to kick up the sweet factor without adding sugar. They are the plum in Japanese plum wine, a sweet and sour liqueur that has been enjoyed in Japan for hundreds of years. The ever-popular Santa Rosa is a type of Japanese plum known for its purplish-red skin and its sweet and juicy red flesh.

The European plum is believed to have been the first variety introduced to North America, some say by the pilgrims. European varieties are more ovular in shape and can be yellow, green, or red-skinned; however, the purplish-blue hue is the type most commonly found. They have a lower water content, making them more suitable for jams and drying as prunes.

Despite their natural sweetness, plums are relatively low in sugar, coming in at about 16 grams per sliced cup. Plums are also a good source of antioxidants, which help keep anxiety at bay and protect the body against cell and tissue damage that can lead to conditions and diseases like diabetes, cancer, Alzheimer’s, and Parkinson’s. Plums contain important vitamins A, C, and K, and minerals like calcium, magnesium, potassium, and others, and their inflammatory properties can help against the risk of heart disease.

So what are you waiting for? Head over to the local farmers market and pick up some fresh plums. If they’re still a bit firm, place them in a paper bag and leave them on the counter until they ripen. Add them to smoothies, slice them up and have them with a serving of yogurt sprinkled with granola, grill them, toss them in a salad, or just enjoy them in their pure, unadulterated form straight out of your hand. If you’re looking for a little more creativity without a lot of effort, try this quick and easy plum crunch, courtesy of my mother-in-law, Marsha Demarest.

Preheat oven to 375. Pit and quarter plums. Arrange in neat rows in a 9-by-9-by-2-inch pan. In a saucepan, combine brown sugar, flour, and cinnamon. Sprinke over fruit. Beat the egg until light consistency. Sift together baking powder, flour, 1 cup sugar, mace, and salt. Pour this over egg mixture and mix with a fork until crumbly. Scatter this over fruit. Pour batter over top. Bake for 45 minutes. Serve hot or cold with a dollop of whipped cream or a scoop of ice cream.