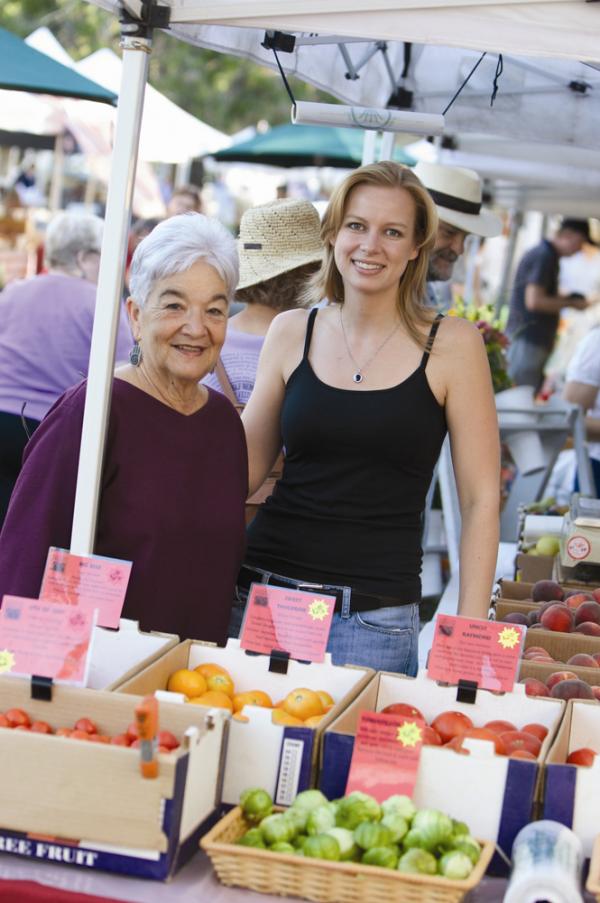 When I handed Joanne Neft’s cookbook to chef Barbara Voigt at the Tahoe House Bakery in Tahoe City recently, Voigt tested the weight of it in her hands and said, ‘This book feels good.’ It’s a statement I’ve heard a couple of times about Neft’s new ‘Placer County Real Food Cookbook: Recipes and Menus for Every Week of the Year’ (self published, 2010), and it surprises me. Why wouldn’t someone look at the pictures inside and comment on those? Why wouldn’t someone scan a few recipes and drool over those? They would, but before you look inside, the heft is what you get. And this book should feel good: It’s the result of a year’s worth of labor, creativity, and love — an intense year in which Neft and her friend, chef Laura Kenny, developed 360 recipes using food grown only in the northwestern Sierra foothills. For 52 weeks they tested recipes by hosting dinner parties at Neft’s Auburn home every Monday night.

Neft’s goal was to get people to understand how easy it is to shop and eat locally all year round — not just in the summer when farmers markets are busiest. From the start, her mission found an eager reception. The cookbook’s first printing of 10,000 copies went on sale on Mother’s Day this year. They’ve almost sold out.

‘I’ve gotten so many thank you notes from people I don’t know,’ says Neft, who lived in Tahoe City from the 1960s through the 1980s and was half owner of Patton Lumber before moving to southern California and then Auburn. ‘How many times have you bought a cookbook and written a thank you note to the author? The notes say things like, ‘I had no idea what to do with all of these vegetables or fruits that to me were totally unknown, and I was afraid to try them.’’

Little did Neft know when this idea budded in the winter of 2008 that the eventual book would go viral in Northern California as speedily as a YouTube video travels by email. (There is a book video on YouTube, at youtube.com/watch?v=Fzdd4ez0hf4.)

By the end of July, she’d attended two dozen book-signings and been interviewed on the California Country television show and Capital Public Radio’s Insight. On Aug. 18, chefs at the Grange restaurant in Sacramento’s Citizen Hotel will feature her recipes on their menu. Dinner clubs have formed with plans to try her recipes once a month. Much of the success comes from a strategy put in motion 18 months ago when Neft sent 250 emails asking friends and acquaintances to make reservations for dinner at her house on Monday nights to taste the meals. Within three weeks every Monday was booked.

Since the cookbook is about buying local food, Neft wanted it to be produced locally (except for the printing, which occurred in China), so she hired a local editor, designer, and photographer. She also commissioned a local ceramicist to make special edition serving platters used during the dinners and featured in the photos. During 2009, the project became a veritable lifestyle for Neft and Kenny, and a sort of ongoing ‘happening’ for the guests who repeated the stories and information about food they heard at the dinners. But the guests aren’t the only people who discovered a thing or two.

‘I’ve learned there’s so much work still to be done to help people make the connection that we are what we eat,’ Neft says, ‘and if we want to be healthy people living in a healthy community we have to think seriously about what we put in our mouths. The other day at the farmers market I bought $200 worth of blueberries. Somebody said, ‘What are you doing with that many blueberries?’ I said ‘I’d rather spend $200 eating really good tasting food high in antioxidants and freeze them and eat them all year through. I’m choosing to spend $200 on healthy food instead of buying pills several years from now.’ Telling that kind of story is my job now.’

You can buy ‘Placer County Real Food Cookbook’ at Tahoe House, the Bookshelf, and the Cooking Gallery. For more information, check placercountyrealfood.com.

Place riblets in large baking dish (don’t cut them apart). Season with salt, pepper, paprika. Pour coffee and beer into pan, bake for 11⁄2 to 2 hours, basting frequently. Remove 2 to 3 cups of the liquid and pour into a small sauce pan. Increase oven temp to 425° and baste riblets with grilling sauce; bake 20 minutes more. Meanwhile, bring liquid in saucepan to a boil at high heat until reduced to 11⁄2 cups. Remove ribs from oven and slice. Serve reduced liquid in sauce bowl.