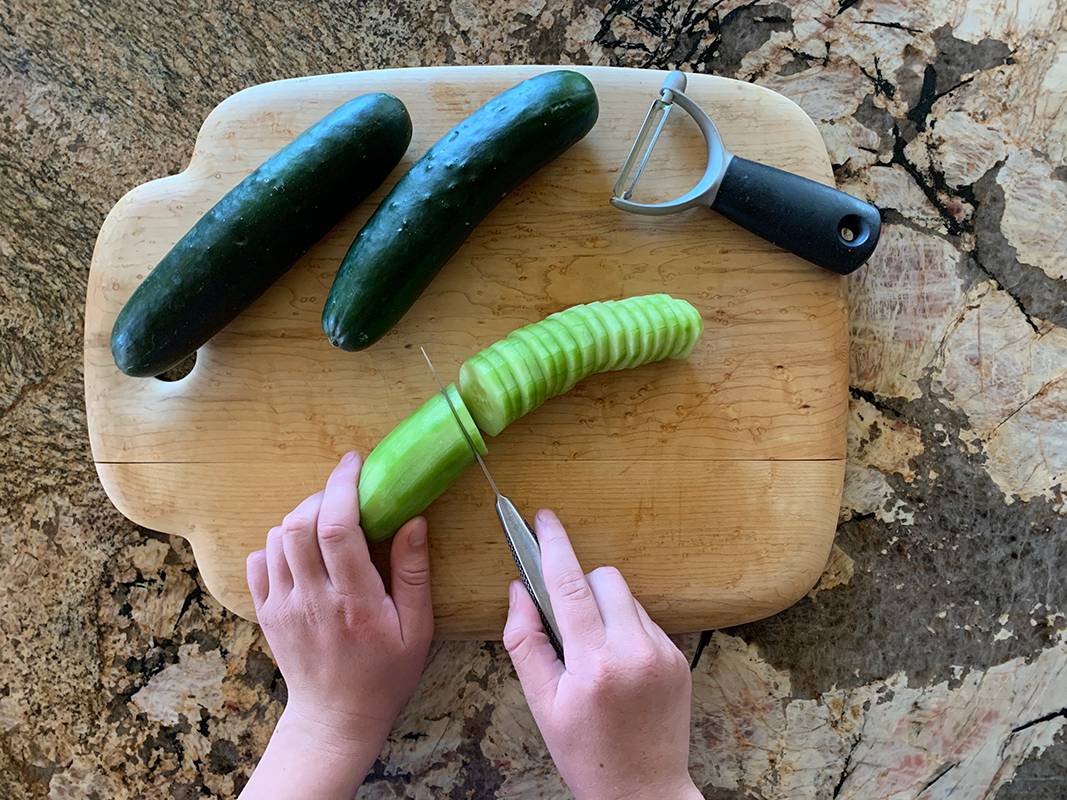 Summer heat dragging you down? Chill out and lighten things up in the kitchen with these simple cucumber dishes. Cukes are known for their ability to cool the temperature of the blood, which explains why they’re often used in facial care to reduce puffiness of the eyes and face. With a water content of 95%, they’re super light and refreshing, but don’t let that trick you into thinking there’s more water than nutrition: Cucumbers are packed with folic acid, calcium, iron, magnesium, phosphorus, potassium, zinc, vitamin C, and five B vitamins. 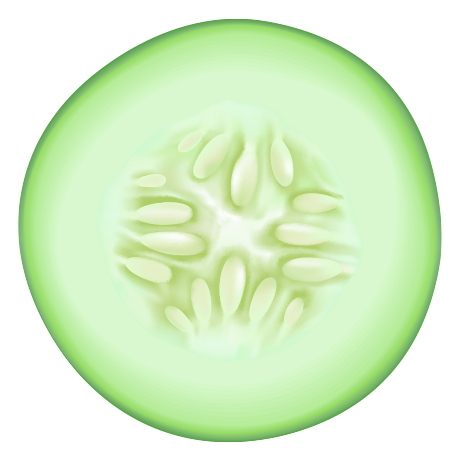 They can help stave off hunger, so if you’re watching what you eat, try slicing up some cukes for a snack. Kick it up a notch by covering them with hot sauce, then squeeze in some fresh lime juice and a sprinkle of salt.

Much like tomatoes and avocados, cucumbers often are victims of mistaken identity in that they’re technically a fruit, not a vegetable, based on how they grow — at least depending upon who you ask. Horticulturists would claim they’re vegetables because they grow  on an herbaceous plant with no woody stem above ground. Botanists, on the other hand, would say that since cucumbers develop from flowers, they are indeed a fruit, which tends to be the more common definition. And like zucchini, cucumbers are cousins of pumpkins and squash, which also grow from flowers on a vine.

There are three main varieties of cucumbers: slicing, pickling, and seedless/burpless. Slicing cucumbers are typically eaten raw, either peeled or with the skin on. In the U.S., the skin on this variety tends to be smooth and tough compared to those grown in other countries. Picklers are what you’ll find in most commercial pickle brands. They’re shorter and thicker than slicing cucumbers with bumpier skin and range from pale and yellowish to darker green shades. Burpless cucumbers have a thinner skin and are said to be easier on the digestive tract as they have far fewer seeds than slicing cukes. These range in size but can grow up to 2 feet long. Also called greenhouse or hothouse cucumbers for how they’re grown, you’ll typically find slicing cucumbers wrapped in plastic as their thin skin makes them more delicate.

Cucumbers are great for crunching on a hot day and are perfect on their own, in salads, or even diffused in a cold glass of Tahoe tap. There’s still plenty of summer left to try these simple recipes, so head out to your garden or swing by the farmers market and start slicing today!

1/2 cup sour cream, but can adjust to desired consistency

Peel and thinly slice the cucumbers. Sprinkle them with salt and place them in a sieve or colander over an empty dish. Loosely cover the cukes with a piece of plastic wrap and place a heavy bowl on top of them. This will help press out excess moisture. Let them sit in the refrigerator for a few hours and then transfer cucumber slices to a bowl. Slice onion into very thin strips. Add in sour cream, vinegar, and season with white pepper to taste. Makes four servings.

Spread hummus in the bottom of a shallow casserole dish. Spread Greek yogurt on top of the hummus, then layer with tomatoes and cucumbers. Sprinkle sliced olives and feta cheese over the top. Serve with pita chips.

In a blender, mix all ingredients, except the cucumber, until smooth. Peel, quarter, and seed the cucumber. Add to the blender and blend just until cucumber is chopped up. Put the blender with soup into the refrigerator and chill well. Just before serving, blend briefly and pour into chilled soup bowls. If you want to get really fancy, serve in large chilled wine glasses. Optional: Garnish with chopped almonds.

Main image caption: COOL CLASSIC: Although they’re a guaranteed part of any decent veggie platter, cucumbers are, by definition, a fruit. Photo by Juliana Demarest/Moonshine Ink

Cool as a Cucumber
Music