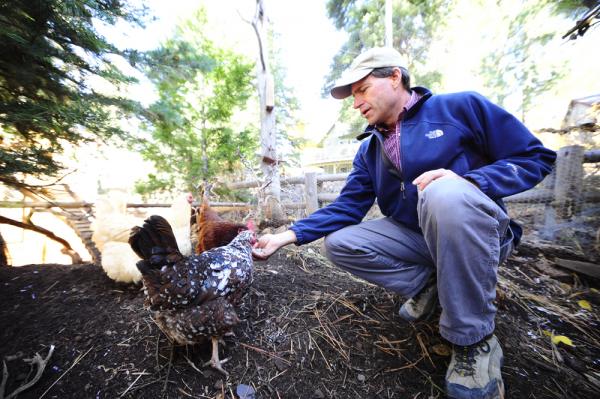 Placer County District 5 Supervisor Jennifer Montgomery has written a zoning amendment that would allow people in residential areas to keep up to three hens on their property. Montgomery said she decided to initiate the amendment  after hearing from several constituents, including Dan Warren, who would like to be able to keep hens in their backyards.

‘There is a general sense that people really support the idea,’ she said. ‘Dan has some legitimate arguments.’

However, Montgomery stressed that the amendment will be strictly written. It will not allow roosters or apply to people living in high density areas, such as condos, and it will not be automatic. Residents who want to keep hens will be required to go through an administrative review process to enable neighbors to voice their concerns.

‘We didn’t want to take away a neighbor’s right to comment,’ Montgomery said.

Montgomery expects the amendment to go before the board of supervisors for a vote early next year.

To make your voice heard on this issue, contact Jennifer Montgomery at 530-889-4009 or  JenniferMontgomery@Placer.ca.gov.

Two years ago, Truckee resident Dan Warren was reading a copy of Mother Earth News when he came upon an article titled, ‘Meet Real Free-Range Eggs.’ He was disturbed by two things he read: the authors had found that typical supermarket eggs, which usually come from chickens confined indoors on factory farms, were lower in nutrients and higher in cholesterol than eggs from pasture-raised chickens. And the term ‘free-range,’ it turns out, is not all it’s cracked up to be. The U.S.Department of Agriculture allows producers to label their eggs that way as long as chickens have ‘access’ to the outdoors, regardless if the birds ever leave the coop or not.

‘You might be getting organic eggs, but what does that mean?’ Warren said. ‘‘Free-range’ could mean that the chickens run on a concrete pad.’

After reading the article, Warren had an epiphany. If he wanted quality eggs, he’d have to raise chickens himself. In his backyard. In Sierra Meadows. Little did he know at the time that this seemingly benign quest for healthy eggs would get him into trouble with Placer County, not just because of his feathered friends, but also because he had unwittingly violated the county’s setback ordinances when he built the chicken coop and pen. Now Warren is on a mission to convince the county that its codes regarding these two issues should be changed. But will he succeed?

Bringing the Chickens Home to Roost
Before Warren went about raising chickens, he first checked Placer County code to see if he could have fowl in his backyard. He concluded that it was legal.

‘I tried to read through the Placer County ordinance, but it wasn’t clear to me that I couldn’t have them,’ he said. ‘I thought I could have a couple hens.’

Next he checked with his neighbors to see if they would mind if a few chickens moved in. According to Warren, there were no objections. He even offered to house a chicken for any of his neighbors if they were interested.

That year, the former Northstar Ski Patrol director built a 5-by-7-foot cabin he dubbed ‘La Gabbia di Pollo,’ Italian for chicken cage, in the small backyard of his quarter-acre lot. The 7-foot tall chicken house is made out of scrap wood with a metal overhanging roof and an old wood-burning stove inside. Pieces of flattened beer and soda cans line the seams of the walls to keep out the draft, a trick Warren learned from his Italian-immigrant grandfather. Adjacent to the chicken coop is the pen, a 400-square-foot space surrounded by wire. There are also three other structures in Warren’s backyard: a 5-foot tall firewood shed with a metal roof, a 60-square-foot log cabin he built for his daughter 10 years ago as a playhouse, and an 80-square-foot pole barn next to the pen, which he uses for storing uncut logs.

Almost all of these, he would come to find out, are illegal.

But in the spring of 2008, a year before he received his first violation notice, Warren went about with his plan. He bought three chicks: a Rhode Island Red he named Lil’ Red, a Speckled Sussex he called Sashamo, and her sister Padma. Padma, however, turned out to be a boy. When he turned into a rooster the next summer and started to crow, Warren ate him for dinner.

‘I don’t want to upset the neighbors,’ said Warren, 47, who described the rooster as ‘tough but tasty.’

Ruffling Feathers
Warren feeds the chickens kitchen scraps, old vegetables from his garden, and grain, and lets them graze in his front yard in moveable pens he calls ‘lawn tractors,’ which have the double effect of mowing and fertilizing his lawn. By September of 2008, Warren had what he wanted – fresh, delicious eggs from true ‘free-range’ hens.

‘They are much better than the kind you get in the store,’ he said, holding an oblong brown egg. ‘They are richer in flavor, and the yokes are darker.’

At first, the chickens seemed like a win-win for the neighborhood. Warren keeps Peanut, a Buff Orpington hen, in his coop for one neighbor. He also lets neighbors throw their garden and kitchen scraps in the pen, like a communal compost pile. And Judd Burke, a furniture maker who lives across the street, gives Warren bags of sawdust that would otherwise end up in the trash. The sawdust reduces the smell in the coop by absorbing odor and wetness.

Burke said he has never been bothered by the chickens. ‘I don’t really even know they are over there,’ he said.

But in the spring of this year, someone noticed. And they were not pleased with what they heard and saw. They filed a complaint with Placer County Code Enforcement about the chickens and animal enclosures. In April, Code Enforcement Officer Ben Branaugh visited Warren’s house, and found him in violation of three ordinances: animal raising and keeping in a residential zone, unlawful land use, and three structures – the coop, cabin, and pole barn – two feet inside the setback. Placer County code states that for lots less than one acre in size, any structure greater than 120 square-feet has to be located 10 feet from the property line in the rear, 20 feet in the front and a total of 15 feet on the sides.

‘If a lot is under one acre, nothing can be in the setback, regardless of the structures’ size,’ Branaugh said.

According to the county, setbacks were designed to protect neighbors’ privacy.

‘Neighbors don’t want something right next to the property line,’ said Allan Breuch, Placer County Supervising Planner for Special Projects and former chair of the Code Enforcement Task Force Group. ‘People want to be able to enjoy the privacy of their land.’

‘It doesn’t make logical sense to me, nor do I think it’s right or fair,’ said Warren, the Glenshire Devonshire Residents Association general manager, about the setback ordinance. 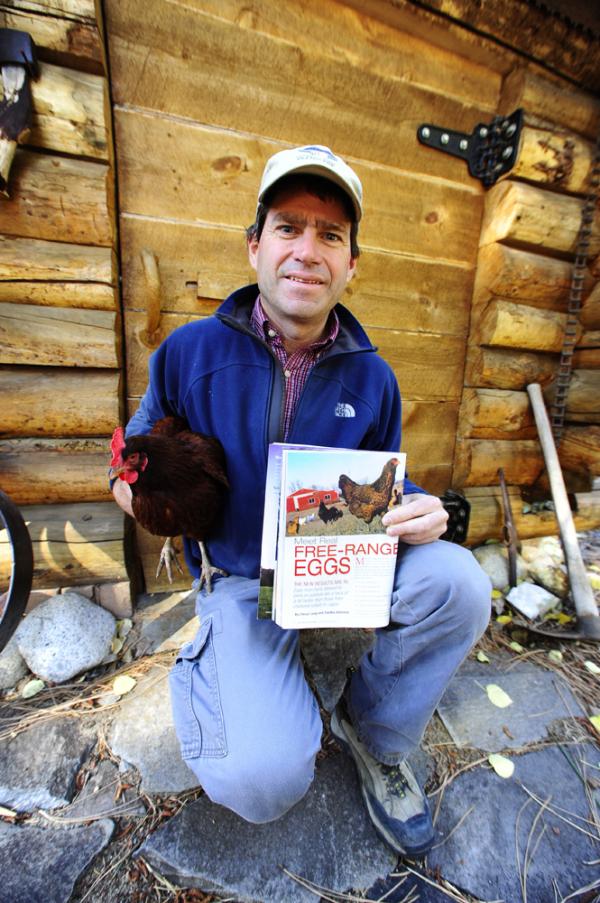 The irony of Warren’s setback problem is that the Nevada County/Town of Truckee line runs right behind his backyard, placing him in one county and his rear neighbors in the other. Truckee’s setback ordinance differs from Placer County. Structures that are 120-square feet or larger are only required to be 5 feet from the rear property line (there are different rules for a house), while those that are smaller than 120-square feet and less than six feet in height have no limits. So in essence, the rules that were created to protect Warren’s rear neighbors would not apply to them.

Playing Chicken
Nevertheless, Warren’s house is firmly in Placer County. Branaugh gave him some options for fixing the violations: he could move the structures, get rid of them all together, or apply for a variance. A variance is a request for an exception to the code based on hardship, such as topography or lot size. But at a cost of $1,525 (non-refundable), Warren said applying for a variance was not a real option for him.

There are no options, however, for the hens.

‘To be in compliance, he has to get rid of the chickens,’ Branaugh said. This is because having chickens on your property is a use, and you can not get a variance for land use.

‘I can’t say ‘I don’t like my zoning, I want to put in a gas station,’’ Breuch said. ‘He’d have to change the code to have chickens. And only the supervisors can do that.’

Warren, however, is determined to overturn rules that he feels are unjust. He believes it’s his right to raise his own food. That left him with only one alternative – court. He is set to appear before a judge in Tahoe City on Dec. 7.

‘This is not about me, it’s about anyone who wants to do what I’m doing,’ he said. ‘It’s why I decided to fight it in court, to prove that the code is illegal.’

Warren’s quest may prove challenging. While it’s possible to get zoning rules changed, it’s not easy. Stakeholder groups must be formed, public hearings held, and the board of supervisors convinced.

‘It’s not concrete that it can’t be changed, but it is law,’ Breuch said. ‘The public has already spoken. He does have an uphill battle.’

But this is one battle Warren is willing to fight. And he may not have to do it alone.

‘There are quite a few residents who have chickens. A lot are doing it secretly,’ he said. ‘But you shouldn’t need to sneak around to have healthy food.’

~  To see a video of Dan Warren and his chickens, go to youtube.com/watch?v=S3VH1FTlBLU.
~ Email the author at msiig@moonshineink.com