Home Sections Eggs: Are They Good Food or Bad Food? 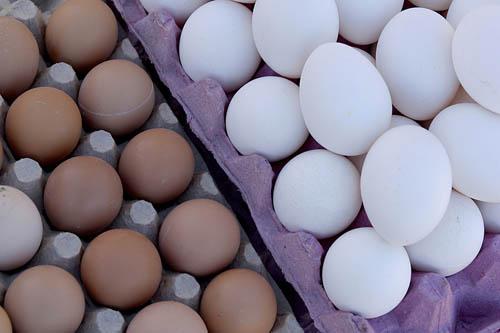 If there’s one food that’s been misunderstood, slandered and rejected, it’s the egg. Once appearing center stage on the American breakfast plate, the egg is now relegated to the occasional meal – rationed, and treated like an indulgent sin.

What caused this once-popular food to fall from our good graces? Back in the 50s, Americans loved eggs. Scrambled, fried, or sunny side up – we didn’t care. Each of us ate more than 400 eggs a year, and continued to enjoy them without much thought until the 1970s, when the dreaded ‘C’ word was branded onto our collective conscience.

Cholesterol. It became the new bad boy of the American diet, thanks to doctors and nutritionists of the day who theorized that dietary cholesterol, such as that found in eggs, had a direct effect on blood cholesterol. As numbers go, the accusations weren’t entirely unfounded. One egg contains about 215 mg of cholesterol, the same as a piece of cheesecake and a cheeseburger, combined. No wonder eggs were considered a major enemy in our war against clogged arteries.

The poor egg took its most devastating blow in 1973, when the American Heart Association recommended that people eat no more than three eggs per week. The nation took heed, and by the early 90s, we had dropped our egg consumption by 58 percent, to about 230 eggs per year.

Thankfully, that wasn’t the end of the story. Today, as researchers continue to discover more about the complexities of heart disease, they’re learning that cholesterol may play a much smaller role in the disease than previously thought.

As logical as it seems that eggs and other high cholesterol foods would raise blood cholesterol, studies have shown that for the majority of people, this just isn’t the case. For a lucky 85 percent of the population, blood cholesterol does not seem to be affected by the amount of dietary cholesterol they eat.

So if dietary cholesterol is off the hook, why do so many Americans have high blood cholesterol? The answer is most likely saturated fat and trans fat, which are now known to play a bigger part in boosting ‘bad’ LDL cholesterol than once suspected. Trans fat, in particular, increases Very Low Density Lipoprotein, or VLDL, a subgroup of bad cholesterol that is even more hazardous than regular LDL.

What’s more, scientists are discovering that a person’s cholesterol profile is not the only factor in determining their risk for heart disease. Arterial inflammation (measured by a marker called C- reactive protein, or CRP) and homocysteine (a by-product of metabolism) may contribute just as much, if not more, to the disease than cholesterol.

Sugars may be partly to blame, too. ‘Diets high in sugar and simple carbohydrates contribute to a pre-diabetic state called Metabolic Syndrome, also known as insulin resistance,’ says Sharmisa Martin, Nurse Practitioner in cardiology at Reno Heart Physicians. ‘This condition promotes cholesterol build-up inside the arteries, leading to atherosclerosis.’

Eggs, as it turns out, contain a substance called betaine that lowers levels of homocysteine in the body. Another substance in eggs called phosphatidylcholine, prevents much of the egg’s cholesterol from being absorbed into the bloodstream.

What a neat trick.

So does all this mean you can have a three-egg omelette every morning? Some of you could probably get away with that, thanks to your genetic stock. But for the typical person, an egg a day is considered by some doctors to be a good average.

But not everyone can be so indulgent. For 15 percent of the population, blood cholesterol is directly affected by dietary cholesterol. These folks can feel their arteries clogging at the mere mention of a scrambled egg. If you’re one of these people, you need to pay close attention to how much dietary cholesterol you’re getting, from all sources.

But no one should be tempted to give up eggs altogether. Eggs are a complete protein, packed with vitamins and nutrients. The white, or albumin, contains seven major proteins and no fat. The yolk contains protein, too (half of the egg’s total, in fact) but is better known, of course, for providing all of the fat and cholesterol.

What is lesser known about the yolk is that it is highly nutritious. In addition to vitamins A, D, E and six B vitamins, the yolk is rich in lutein and zeaxanthin, which are antioxidants that can reduce the risk of cataracts and help prevent age-related macular degeneration – the leading cause of blindness in the elderly.

So the next time you cook a big Sunday breakfast, you might want to lighten up on the bacon, fried potatoes and white toast. But go ahead and enjoy that omelette. It’s about time the humble egg regained some of the status it once enjoyed, back when Elvis was King.

Fun Facts About Eggs
• One egg provides 6 grams of protein, 75 calories and only 1.5 grams of saturated fat.
• A single eggshell has 9,000 pores.
• The color of an egg varies by the breed of the hen. The pigment in brown eggs can be removed with vinegar or by rubbing with sandpaper.
• The green-gray ring around the yolk of a boiled egg does not affect the egg’s flavor or nutritional content. It’s composed of ferrous sulfide, and is the result of overcooking.
• Older eggs are easier to peel after boiling than fresh ones. The reason is a mystery, but may have to do with carbon dioxide diffusing out of the egg as it ages, causing the egg white to thin and become more alkaline.
• Eggs contain a number of sulfides, which contribute to the ‘rotten egg’ smell. But a truly rotten egg contains hydrogen sulfide, which forms if bacteria penetrate the shell.
• Organic eggs are raised from hens whose diet is free of animal by-products and genetically modified grains. The hens have access to the outdoors and have not been treated with antibiotics.

Eggs: Are They Good Food or Bad Food?
Arts & Culture