Home Sections The Spirit of the Lake 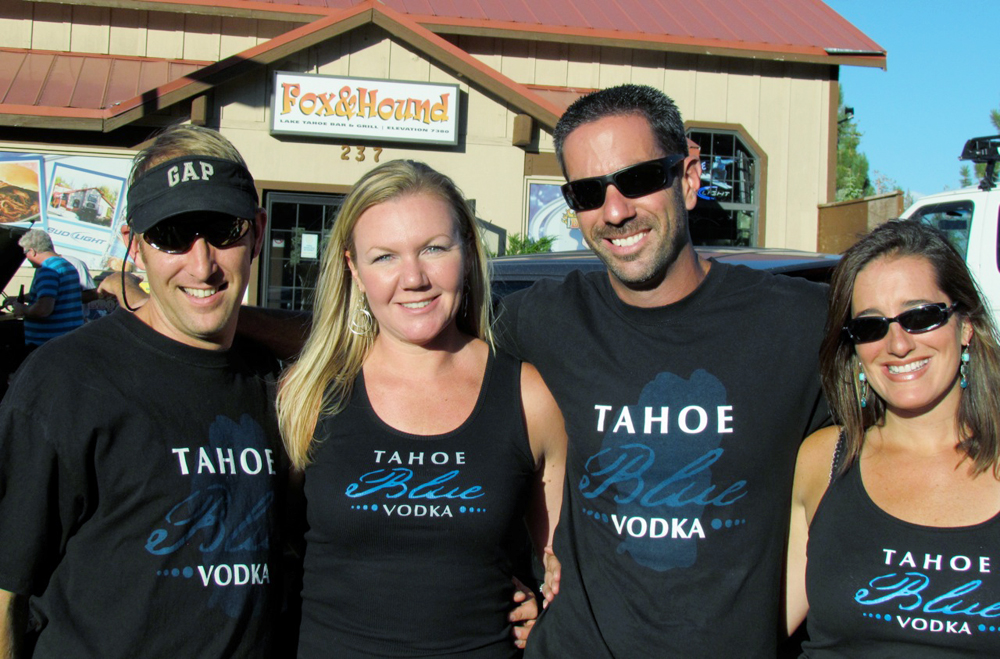 When Matt Levitt visited South Lake Tahoe on a cross-country road trip in 2000, he didn’t envision staying here, starting a family, and owning a painting company. And he definitely had no idea that 12 years after moving here, he would found a spirits company inspired by, and named after, the lake’s clear waters. Two years later, Tahoe Blue Vodka is already prevalent in bars and restaurants around the lake, and is sold by major grocery stores from Reno and Tahoe to the Bay Area.

Though Levitt was not previously a vodka drinker and had no experience in the industry, through research and tireless work he’s built a privately owned company that landed deals with Safeway, Raley’s, and Save Mart all within the first month of distribution. Tahoe Blue competes for shelf space against international names like Grey Goose and Absolut, and it regularly receives awards in spirits competitions. The small batch, artisan vodka won first place in last year’s Ultimate Spirits Challenge in New York, beating out more than 60 name brand unflavored vodkas.

Levitt wanted the vodka’s taste to be reminiscent of the pure and clean essence of the lake, so he began working with a father and son distillery team based in Mountain View, Calif. that he knew would make the quality liquor he wanted — every single bottle on display in their distillery was decorated with medals. And the team was willing and able to meet Levitt’s requirement for “something special to put in the bottle, something that keeps people coming back.”

One of Tahoe Blue’s most defining traits lies in the fact that it’s one of very few blended vodkas on the market. To achieve its uniquely smooth flavor profile while omitting the characteristic vodka after-bite, Tahoe Blue Vodka is made of three different types of vodkas: 50 percent sugarcane, 25 percent grape, and 25 percent corn vodkas.

With the unique vodka ratio nailed down, the bottle graphics created by a South Lake designer, and the addition of Levitt’s longtime family friend Chris DeMay to the company, Tahoe Blue Vodka has been steadily growing and expanding over the past two years. “When someone says ‘This is in my freezer’ or ‘This is what I drink,’ it still gets me excited,” DeMay said. “Or when people say, ‘I can’t drink vodka,’ and then half the time they’ll still drink it and like it.”

Another crucial element of the company is philanthropy. Since the vodka’s name was inspired by the famous Keep Tahoe Blue stickers, and because the alcohol celebrates Tahoe’s pristine waters, Levitt wanted his vodka to give back to its namesake and help preserve it. “Wouldn’t it be great if we donated a portion of the proceeds back to the community?” Levitt said of the company’s early days. They donate a portion of sales to more than 30 local charities, including the League to Save Lake Tahoe, Nevada Diabetes Association, local schools, and more.

Levitt and DeMay see the company’s success as resulting from a combination of fortunate events and lots of hard work, and not without its share of learning experiences. Good fortune struck when DeMay tried to get shelf space in a local liquor store and unknowingly gave his business card to the vice president of spirit purchases for Raley’s stores (score!).

While the business is still in the beginning stages, early successes and the public’s response to the vodka gives the Tahoe Blue guys confidence and fuel to continue shaking up the industry.

“We sold just over 1,000 cases last year, which is a benchmark,” Levitt said. “We’ve made progress, and it didn’t come and go and die already; it’s growing … It makes us think all this hard work will pay off eventually.”

~ Do you take your Tahoe Blue Vodka shaken? On the rocks? With a twist? Tell us online at moonshineink.com.

The Spirit of the Lake
Sports & Outdoors / Wellness
10:00 am

The Spirit of the Lake
Education
7:00 pm