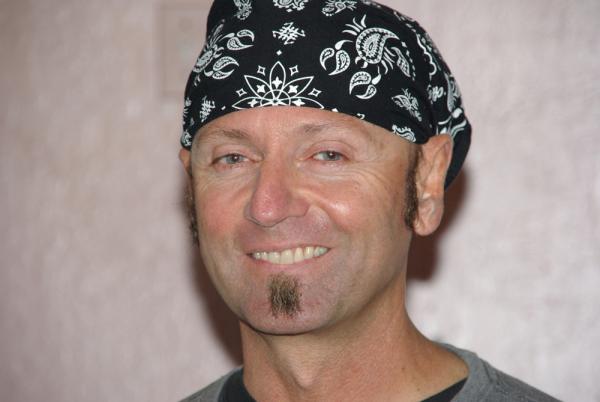 Miller is an extraordinary person who came into my life after I’d asked the Universe to send me a teacher who would help me gain some clarity. You see, I’d become overwhelmed by the different spiritual practices and beliefs I’d been studying and applying to my life. I’d been calling on my angels, Feeding my Demons, trying to decipher my Mayan sign, and on top of all of that, a healer with whom I’d been working, introduced me to the Dragons. My head was going to pop. I just needed to keep it simple.

‘I’m just a guy with a bandana on my head,’ claims Adam Miller. ‘I’m not unusual, other than my job. I am a healer and a messenger. That is my job.’ He stresses again and again that he is not metaphysical. He’s not religious. He’s just right in the middle of the road. That’s where he teaches and heals.

On the outside he has the Tahoe bachelor thing going on. He comes off like a guy’s guy – a bit abrasive, completely outspoken and rough around the edges. There’s nothing airy-fairy about him, but he has unusual depth and insight that he is willing to share with those who are open and ready. Adam has recently ‘come out of the closet’ as a healer and messenger, and is now telling his story and doing his healing and channeling work in public.

Adam Miller was a world-class figure skater with Olympic potential.

(He remembers practicing at Squaw Valley’s Olympic rink as a young adult.) When he was 18 years old he contracted double pneumonia, collapsed on the ice and was rushed to the hospital with a temperature of 108 degrees. He died for four minutes and went to the other side, where the veil of consciousness was lifted and ‘universal energy’ began to flow through him. That energy allows him to be a conduit for healing others. In the 34 years since his death experience he has done healing work with between 20,000 and 25,000 people, working with some 2,000 different diseases. Operating with the ‘universal spiral healing energy,’ he helps create a shift in a body’s consciousness, a reintegration of mind, body and spirit.

The energy gets to the root of an illness or issue and creates change at a cellular level.

Pain and disease can be a powerful teacher. Indeed, pain is often the only thing that makes us stop and pay attention. Unfortunately, we become habituated to focusing on the pain rather than on the lesson. ‘Illnesses are not bad,’ he says, ‘they are a manner in which a spirit has chosen to learn and move forward.’

I have learned a great deal about myself with Adam’s help.

A major part of Adam’s job is to be a bridge between the unconscious world and the ‘conscious universe.’ Adam channels ‘The Masters’ he met on the other side – those who have been his teachers since his path turned. Jesus, Buddha, Mother Mary, The Angelic Host, Saint Germain and many others share their wisdom, the ‘universal truths,’ through Adam. I have been to his channelings and have had a great deal of one-on-one time with him. ‘The Masters’ are always in on our conversations, and I am consistently amazed at the truths about myself that come out of Adam’s mouth. There is no hiding when you are in his presence.

There is so much more to this story that you’ll have to hear from him. Watch him on my new TTCTV program, ‘Om: An Exploration of Universal Consciousness,’ airing soon on Channels 6 and 24. Tune in to Blog Talk on Sundays at 8:30 a.m. and Wednesdays at 8 p.m. on ‘Red Heart’ with White Buffalo Calf Woman, at blogtalk.com/Red-Heart. Join the conversation on the blog or call in with your questions for The Masters. 347-308-8020. healer_adammiller@ yahoo.com, 530-913-0403.