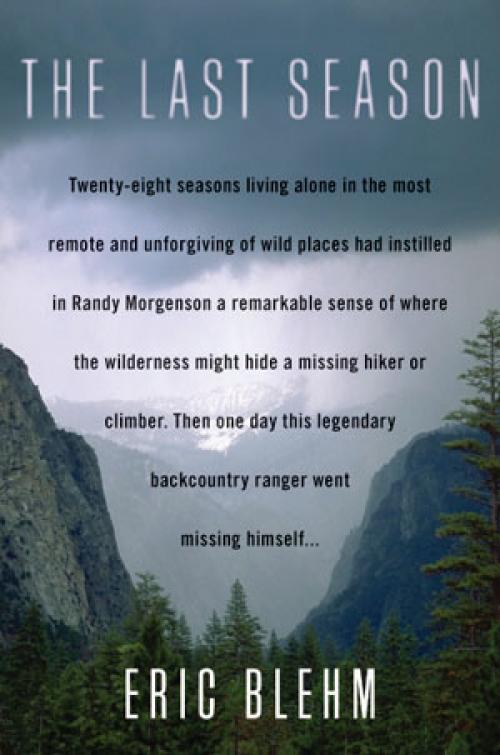 If you spend enough time alone in the wilderness, something profound and almost mystical happens to your mind and spirit. On the other hand, if you are distracted and aren’t paying attention to what is underfoot (be it gravel/talus/snow/ice), something like death can, and will, happen.

‘The Last Season,’ by Eric Blehm, explores both the life-giving and the life-taking aspect of mountains, in particular the Sierra Nevada. He creates a page-turner by delving into the life and mysterious death of one of the region’s greatest fans.

The book is part John Muir philosophy, part adventure story and part mystery novel.
Randy Morgenson, an infamous back country ranger (it is said he channeled Edward Abbey) for more than 25 years in the Sequoia-Kings Canyon National Park, disappeared while on patrol in July 1996. His body was not found for 5 years. Was it suicide? Foul play? Or simply an accident? Randy was a man of inspiration and mystery, but he was very much human like the rest of us, driven alone into the wilderness, season after season, by both his personal demons and angels.

The Last Season explores his life, from a seemingly idyllic childhood in Yosemite through a troubled marriage, and finally explores the mystery of his disappearance high in the wilderness of his beloved backcountry Sierra Nevada mountains. He hauled Ansel Adams’ camera equipment around in his youth and later in life corresponded with Wallace Stegner about how to capture the wilderness in words. He kept copious diaries, and even taught photography workshops, in the off-season, with Stuart Scofield of Mono Basin Photographics.

Randy was a passionate wilderness lover and defender, and a search-and-rescue whiz, according to his colleagues. It was said that he knew the wilderness backcountry better than any map. Part of the mystery of this hard-to-put-down book is that very knowledge: If Randy did not want to be found, he would not be found.

An incredible amount of research went into writing this book, not only about Randy’s life and relationships, but also about the backcountry of Yosemite, and Sequoia-King’s Canyon parks. The author was given complete access to Randy’s diaries and journals. He interviewed Randy’s friends and co-workers – those dedicated, under-paid, and often unknown men and women of the National Park Service who love the wilderness and risk everything season after season while on patrol. The book meticulously details the massive search-and-rescue effort to find Randy, and conveys how difficult it was for the rangers to search for one of their own. The author knows the mountains well, too, as he has hiked in the footsteps of John Muir many times. Well-written and well-paced, this book is indeed a strong testament to the enduring power and irresistible allure of wild spaces. Since it is a biography, it is also about one man’s dreams, successes and failures, friendships, and love and death.

P.S. ‘The Last Season’ recently won the National Outdoor Book Award and was chosen as the Barnes & Noble Discover Award for 2006, meaning the best nonfiction book by a new author.