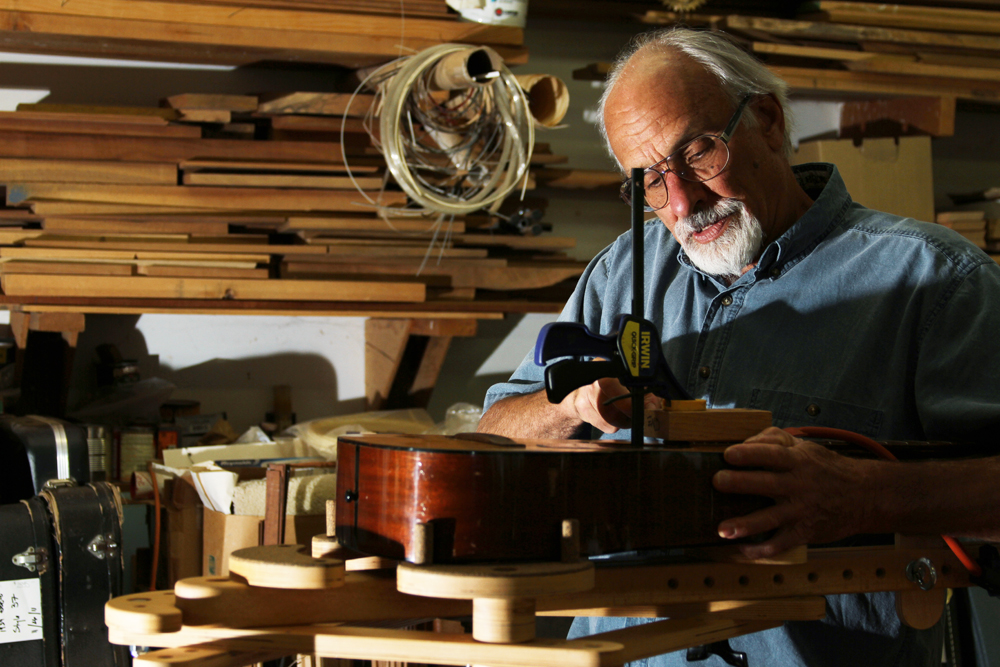 Randall “Sparky” Kramer can’t tell you exactly how long it takes him to make a guitar.

“A long time” is his best estimate. And to see him in his shop, with stunning guitars on display and others suspended in various stages of the making, it’s easy to appreciate the care and details he puts into each instrument. Kramer is a luthier in the truest sense of the word: a man for whom the making of stringed instruments seems equal part art and science, a man who seems to appreciate the process as much as the product.

Kramer’s guitars, which sell for thousands of dollars all over the country, are beautifully crafted with laborious details like inlaid mother of pearl. And they come together by hand, with a step-by-step process that begins with a humble piece of wood. When we met one sunny weekend morning last month, he pulled a piece down from the top shelf of his Truckee shop to illustrate the tonal differences between various species of wood.

“In a nutshell, the woods create the voice,” he said, tapping what looked like a piece of plywood with his knuckle like he was knocking on the door of a friend’s house.

He leaned his ear in close to hear the answer. The sound is flat, not a lot unlike a knock on the door. “Walnut,” he concluded. “Which sounds like cardboard.”

Sparky smiles a lot. He smiled at walnut, and he smiled at the next piece of wood off the shelf, Brazilian rosewood.

“Rosewoods are going to influence the voice of a guitar very differently,” he said. With all of its harmonic overtones, rosewood is not for everyone, he said.

So he is not just a luthier; he is a matchmaker.

Kramer, 64, has been making guitars for almost two decades. He works out of a huge shop beneath his Truckee home, a sun-soaked, two-story structure he built himself on several acres back in the late 1980s. His shop, intended from the onset for woodworking, is as large as his living space and about the same footprint as the thriving vegetable garden he and his wife cultivate (with the help of two cats) in the backyard.

Just driving into his place, with its collection of old vehicles and antiques, made me feel at home — as if I was in a place where everything has a value that transcends its commercial price tag.

The hand-built home and the huge shop makes sense when one considers that Kramer is, by profession, a furniture maker. But woodworking took a turn for him in the mid-1990s when he met Mark Blanchard, a renowned luthier who happened to be at the Millpond Music Festival in Bishop at the same time as Kramer.

“I was just so impressed with the sound of the guitars he built,” said Kramer. They got to know one another, and when the opportunity presented itself to learn guitar making, Kramer brought to the task 20 years worth of woodworking skills.

Soon after building his first guitar with Blanchard, Kramer set to work on another one, realizing that if he didn’t practice his newfound skills, he might forget them. That guitar, made from German spruce and basket weave walnut, now belongs to Chuck Dunn, lead singer and guitarist for the Blues Monsters.

“It played exquisitely,” said Dunn. But the $1,800 price tag was more than he could afford, so he went out and sold several other guitars to buy Kramer’s. “I had never had a custom-made guitar, and it is one of a kind. Sparky does not build the same guitar twice.”

The second guitar was a laborious process, with 80 percent of Kramer’s time devoted to building the jigs and templates that would become the foundation for some of his later creations.

To illustrate the tonal differences of these creations, Kramer took a seat in his shop with a guitar he made of Hawaiian mango. Then he stopped, placed the guitar back on its perch, and moved to the sink to wash his hands. He likes to approach new guitars with clean hands.

He smiled. “A guitar needs to get played. It needs to settle in.”

The sound of this Hawaiian mango is so far removed from redwood that to attempt to describe it in writing would be like describing poetry; it just has to be heard.

EDUCATION |Learn How to be a Grant Writer with SNA