During the winter, I have two jobs.

The first job is bar-backing up near where the Donner Party ate each other. There’s cross-country trails and divorced men drinking there all the time. Women don’t come around as much when it’s cold, so that means less tips.

The other job is at the dog kennel, which costs more per night than a middle-of-the-road hotel. The “ruff-xurious play yard” is actually just a fenced-off part of the back parking lot. Next door is a tow yard where there’s big cars from the city that got totaled when the driver hit a wall of snow that wasn’t there the last time.

I wonder if Arturo, the guy who runs the tow yard, would ever let me have one of those cars to fix up with him. In return, I would babysit his dog, though I think Arturo’s too practical to have dogs.

Anna was this girl at the kennel who was kind of my boss, but not really. She just moved to San Diego with her boyfriend and that’s too bad. His brothers do eco-friendly remodels there and she said she’s going to go to nursing school, like most girls here do.

I wonder why she picked him out that one night and not one of the dozen others playing pool or stealing a pour from the tap. I don’t think she got the best one because she looked like someone was about to draw blood from her arm every time he picked her up.

When she worked at the kennel, it smelled like the soap aisle in the natural food store. Now it just smells like when dogs throw up and eat it.

A couple months ago, this kind of super-done-up lady left her Aussie-and-something for the weekend. She had on the jeans with the rhinestones on the butt pockets and her face had cracks like she’d been crying all the time. There was a pale dent on her ring finger. Usually people stay for like an hour and give very explicit instructions and pass Ziploc baggies of food or treats or medication like you see people do with drugs in the movies.

Bruno got along with the other dogs pretty good that weekend and I let him stay out and play extra because he had lots of energy. I had Monday and Tuesday off and Wednesday he was still there. I took him out to do the snowblower with me and he just jumped as high as he could as snow went over the fence onto Arturo’s crashed cars. It cracked me up.

After a week, they were going to give him to the pound but I took him home. I kind of realized every one of these dogs is someone’s Bruno, so I’m better at my job now because of him. I figure that’s probably why people have kids, so they can understand what all the fuss is about.

Me and Bruno start and end most days by throwing the stick in the lake. He doesn’t seem to get cold even though he shakes the whole time. While I throw the stick, I think a lot about why the water is blue when the sky is blue, and gray when the sky is gray.

Right now we go to Speedboat Beach, which I think used to have another name because when I say Speedboat people just nod like you do when you don’t want to ask more questions. I think they think I saw a fast boat there once so I call it that.

The beach is between the Cal Neva, which is empty except for its ghosts, and this really big house that nobody ever lives in. Sometimes I dream about taking a big, smooth rock from out of the water and throwing it through one of the big panes of glass. I bet the people who own the house pay for cable and gas and electric all year round.

And Bruno and I could live there, right by the water he loves.

I bet even if they came in for a weekend or something I could just use the name of someone (they get mail there once in awhile) and say so-and-so wanted me to be a caretaker during the winter. I’m sure they have hot granddaughters or nieces and maybe one of them would fall in love with the fake caretaker and take me and Bruno to live somewhere like San Diego.

Andrew Pridgen has had an on-again/off-again relationship with the Tahoe Basin for more than three decades. Currently, he dates Tahoe long-distance from San Luis Obispo. They FaceTime often. 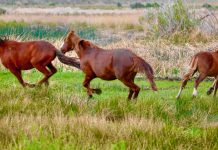 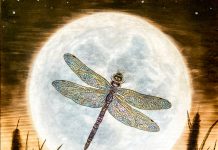 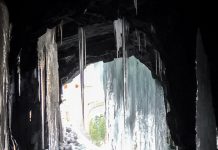