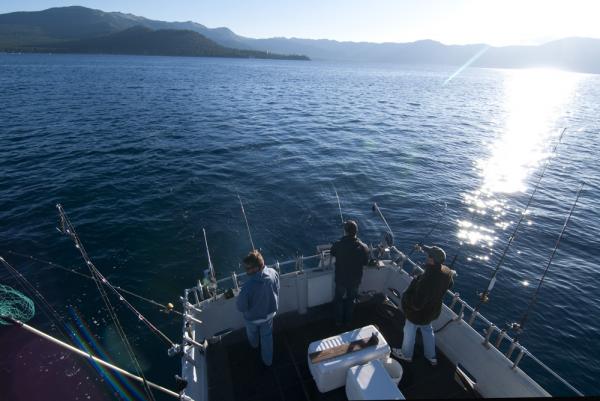 They are hundreds of feet under our boat, cruising along the lightless bottom of Lake Tahoe. Some are as big as preschool children. Others are as old as middle-aged men. Since the late 1800s, they have ruled as the aquatic kings of Lake Tahoe — razor-toothed mackinaw trout with insatiable appetites. But today, with our downriggers, hooked minnows, and oversized flashing lures, we replace them as the top of the food chain.

In the muted light of dawn, with the stars still bright pinholes in the sky and the half moon ablaze, the twin diesel engines of Mickey Daniels’ Big Mack II hum and throb. We are somewhere south of the Cal Neva in deep, inky water when we see them begin to flit across the sonar — orange, red, and green blobs parading across the digital display of the boat’s fish finder.

And it’s then we begin dreaming about the mammoth lunkers that lurk beneath the gunwales.

It’s what has drawn us to the Big Mack II in the pre-dawn hours of a surprisingly cold August morning — the chance to land one of Lake Tahoe’s fabled, voracious, freakishly large mackinaw. They are the most coveted prize sought by anglers on one of the largest and most beautiful alpine lakes in the world. And as the twin diesel engines drone and the moonlit water slips beneath the stern of the 43-foot custom Modutech and wrinkles into a wake, our minds begin to wander underwater to the hungry fish we hope are trailing our boat, sniffing out the hooked minnows and lures that drag the depths of the lake. We, like thousands of fisherman before us, are having Big Mack daydreams.

If you are stalking Big Macks on Lake Tahoe, there is no better guide to go with than Daniels. Daniels is a white-haired former North Tahoe constable who has trolled the lake for half a century.

He pilots the boat by muscle memory, slips bait minnows onto hooks with an ease borne of decades of repetition, and follows the contours of the lake’s underwater geography instinctively.

‘Mickey has forgotten more about fishing Lake Tahoe than I will ever know,’ said Travis Jones, a relief captain on the Big Mack II.

He came to Lake Tahoe in 1959 to see the Olympics and never left. First, in the pre–Placer County Sheriff days, he was a constable who worked the streets of Tahoe City, Carnelian Bay, and Squaw Valley. And then he bought a boat and started fishing.

‘I have been … I don’t know if you call it blessed or lucky or fortunate … to have a couple jobs that I really like,’ said Daniels.
Since the 1960s, Daniels has seen the monsters of the mackinaw family. He has hauled in 43-inch fish that weighed over 30 pounds. All the while he has tagged and released a sizable portion of the lake’s entire mackinaw population, keeping track of the habits, growth rates, and ages of Lake Tahoe’s giant fish.

Along the way Daniels has found something curious. The massive predators that hunt the dark depths of Lake Tahoe actually grow excruciatingly slow and live extraordinarily long.

Despite their slow growth, a 37-pound mackinaw has been pulled from Lake Tahoe; it stands as the California state record.

But rumors swirl around the lake of bigger fish — mackinaw so large they can snap fishing poles. And in a lake 1,645 feet deep and 22 miles long, the stories of lake trout as big as Great Danes might have more truth to them than your average fishing tall tale.

Mackinaw History
Like all stories of Tahoe’s past, the history of the lake’s largest fish is filled with tragedy, loss, survival, and change.

Introduced in 1896, mackinaw ascended as the lake’s ruling predator even as the lake’s original native fish crashed into extinction. The story of the rise of the mackinaw and the fall of the Lahontan cutthroat trout is hardly a concurrent coincidence. Mackinaw, with needle-like rows of teeth, were prime culprits in the Lahontan cutthroat’s demise.

‘Lake trout are opportunistic predators, which means what they can fit in their mouth they will eat,’ said Brant Allen, the captain of the U.C. Davis’ research vessel at Lake Tahoe, the John Le Conte. ‘They can consume a fish that is up to half their length.’

After being introduced to Lake Tahoe, the mackinaw ate Lahontan cutthroat trout. But to say that the mackinaw drove the native behemoths to extinction would be too utterly simplistic. As the mackinaw were introduced, Lake Tahoe residents were doing their best to drive the Lahontan cutthroat trout into oblivion without the help of the new finned predator they had let loose in the lake. Lumbermen dumped tons of sawdust into the Truckee River, ice harvesters dammed the Truckee River, cutting off the cutthroats’ spawning runs, and hordes of fishermen decimated the schools of fish collected at dams as they sought an upstream passage to spawn.

‘Men in small boats hauled in thousands of native trout, which, when not consumed locally, were marketed in Carson City and Virginia City,’ Strong wrote.

The fall of the Lahontan cutthroat trout from the top of Lake Tahoe’s food chain to the pages of history was incomprehensibly rapid. By the early 1900s the cutthroats, which fishermen had only years ago boasted swarmed in the lake in such numbers that they could never be overfished, had sharply declined. By 1940, native Lahontan cutthroat trout were extinct in Lake Tahoe and the Truckee River, according to the Truckee-Donner Historical Society.

The mackinaw was left as the supreme king of Lake Tahoe.

Big predator, small prey
Today there are no Lahontan cutthroat trout left to eat, so mackinaw consume just about any other living thing they can find.

But their main food source is a curiously small meal for the original Great Lakes fish adapted to devour other fish. Today, mackinaw dine mainly on minute Lake Tahoe shrimp.

The Mysis shrimp, like most of the living organisms in Lake Tahoe, were introduced to the lake. Russ Wickwire, a California Department of Fish and Game biologist at Lake Tahoe for 27 years, said the introduction of the shrimp actually changed the character of the mackinaw. Before the shrimp arrived, the mackinaw had white flesh; following the arrival of the shrimp, the mackinaw’s flesh turned a distinct pink color.

In a study published by the U.C. Davis Tahoe Research Group, the appetite and eating habits of the mackinaw is laid out in staggering numbers.

Mackinaw consume 460 metric tons of Mysis shrimp each year (a metric ton is equal to 2,205 pounds). That might be the main course, but the size of the appetizers and side dishes are equally impressive. Lake trout eat 140 metric tons of native fish (minnows, sculpin, and suckers), 6.7 metric tons of kokanee salmon, 22 metric tons of lake trout (cannibalizing their young or the young of other mackinaw), and over 100 metric tons of other prey (primarily crayfish).

In one fall kokanee spawning season alone, mackinaw were estimated to have eaten nearly 34,000 kokanee salmon.

Up from the deep
The rods of the Big Mack II are bent nearly double, straining against the leaden weight of the boat’s downriggers, but an imperceptible twitch of the fishing pole tells Daniels and Jones that a fish has struck at the lure and the trailing minnow. The rod comes out of the holder, and Craig Hook, a client from San Mateo, is soon cranking a Big Mack up from the depths.

We reel in three mackinaw this way, each progressively bigger. The final fish, at more than 23 inches, comes out of the water with an inflated belly due to the de-pressurization it endured while being reeled up from the depths. They are all beautiful fish with gray marbled markings and forked tails.

Wickwire tells me that over the years the California Department of Fish and Game has tried to introduce a whole host of fish to Lake Tahoe, including king salmon, steelhead, golden trout, and brook trout.

‘Because Tahoe is such a sensitive and pure system, none of those fish lasted for any period of time.’

Mackinaw are the true survivors — fish that have carved out a niche in the inky blackness a skyscraper’s depth below the rippling surface of the lake.

How big they grow down there is anyone’s guess. Mackinaw reach weights of more than 100 pounds in deep lakes in Canada, said Wickwire. And then Wickwire pauses before telling a story so tantalizing and mysterious, it reminds you why people return to Tahoe time after time to troll deep in the lake for massive fish. Wickwire knew the fisherman who caught the second biggest mackinaw on Lake Tahoe — a 36-pound beast. The day following his enormous catch, he was once again trolling deep in the lake, when he hooked into something large. Wickwire said he brought the fish all the way to the boat and saw that it was one and a half times the size of his previous 36-pound mackinaw. But just before he reached to net it, the lunker flipped off the hook and slowly sank back into Lake Tahoe.

Summer Thursday Night Favorite is Back