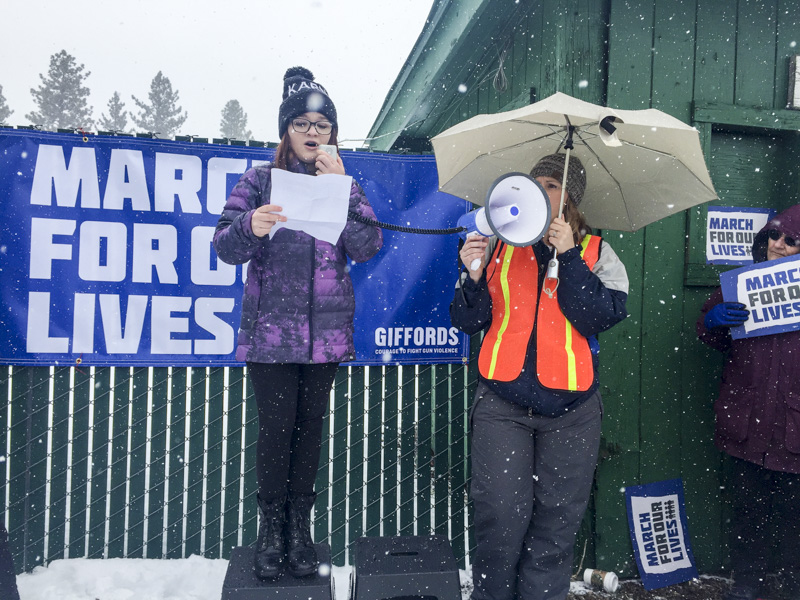 High school sophomore Roxy Hankinson questioned the focus on mental health in the national gun debate and called for change to gun laws at a March for Our Lives protest in Truckee Regional Park on March 24. Approximately 130 people attended the Truckee march, in concert with other student-led demonstrations around the country in support of tighter gun control. Read Hankinson’s speech below:

Hello, my name is Roxy Hankinson. I am a sophomore at North Tahoe High School and I was one of three students who spoke on gun violence during the school walk out. I’ve heard every argument for both sides of this ongoing debate from everyone from my mum to my band teacher. One thing I keep noticing is how gun owners validate their need for a gun despite all the problems firearms have caused in America.

They say the guns aren’t the problem and claim the real problem is the people behind the guns, and that if we paid more attention to the mental health of gun owners the shootings would stop. Sure that’s a great way to rationalize what is a truly terrifying situation because people convince themselves that the only way someone could possibly be capable of such violence is if they were mentally impaired in some way. Because how could someone who was sound of mind be capable of killing? I’m not denying that there is something wrong with people who are willing to commit mass murder.

Nikolas Cruz, the parkland shooter, was described by his peers as being an outcast — he would post pictures on his social media accounts of his guns — and no one took action. He went to Douglas High School armed with an AR-15, a gas mask, and multiple magazines. According to a report made by his mother in 2016, Cruz was mentally ill. He was depressed, had ADHD, and was on the autism spectrum. He did not have voices in his head urging him on, nor did he display signs of a more serious issue, and his mother said he had received help.

I know it’s hard to believe that someone could just snap one day, but that is, unfortunately, the case with most shootings. The premeditation involved in the Parkland shooting suggests a need for revenge, but that does not make Cruz mentally ill. Revenge and anger are not diagnosable illnesses.

I have been mentally ill. I had Generalized Anxiety Disorder, panic attacks, and depression. The thoughts in my head were all about people hating me or the house caving in while I was asleep. I never even thought about shooting anyone. Most people with a mental illness are only concerned with what is happening to them. Girls who starve themselves are only concerned with perfecting themselves. ADHD is defined as someone being unable to remain task oriented. Even the less common and more frightening mental disorders are not indicators that someone will become a shooter. In most cases they find the thoughts they have unpleasant, and most seek out help.

Only 3-4% of violent acts are committed by the mentally ill, and this includes gun violence. Granted, there are mental health risk factors, such as first episode psychosis, which is a situation commonly associated with violent behavior. However, seriously mentally ill people are rarely violent. Moreover, they would not be able to attain a gun on those grounds, or at least that’s how it should be.

Drawing our attention away from guns and putting it on the mentally ill only marginalizes an already marginalized group. The same goes for treating high school outcasts as ticking time bombs. The problem with guns cannot be blamed on mental illness alone. To commit a crime one needs the means to do so. To shoot someone, you need a gun and bullets. So you cannot say that guns don’t kill people, as it’s the weapon that does the damage in the end. You cannot shoot someone with a pencil. The problem is not the mental state of gun owners, rather the accessibility we have to guns.

I acknowledge fully that there are other weapons that can kill, however, a gun is the most impersonal and quick way to kill someone. To stab someone you have to see their face, so most people would not opt for that if they intended to kill.

How long will it take to see a change? When is it enough? Is there a finite number we are trying to reach before our government does something? Because since 2000 there have been 188 mass shootings at schools and universities alone. This does not include shootings at concerts or bars. So are we getting close yet? What will it take?

I hope that it does not take someone you love being killed by gun violence to encourage you to take action. We should not need the experience to understand the horror and heartbreak families have endured as a result of our country’s lenient gun laws. How can you believe that guns are not the cause of deaths when our rate of gun deaths is practically touching the sun in comparison to other countries? How can you say you are sorry for the losses when all you do is post on social media “Pray for (insert town, school, or names of victims here),” and then go on suggesting that what these schools need are armed guards rather than simply fixing the problem? This country needs to stop averting its eyes and covering its ears so it is shielded. This country needs to stop finding every excuse to keep guns and look at the real problem. Because I think we’ve all had enough.