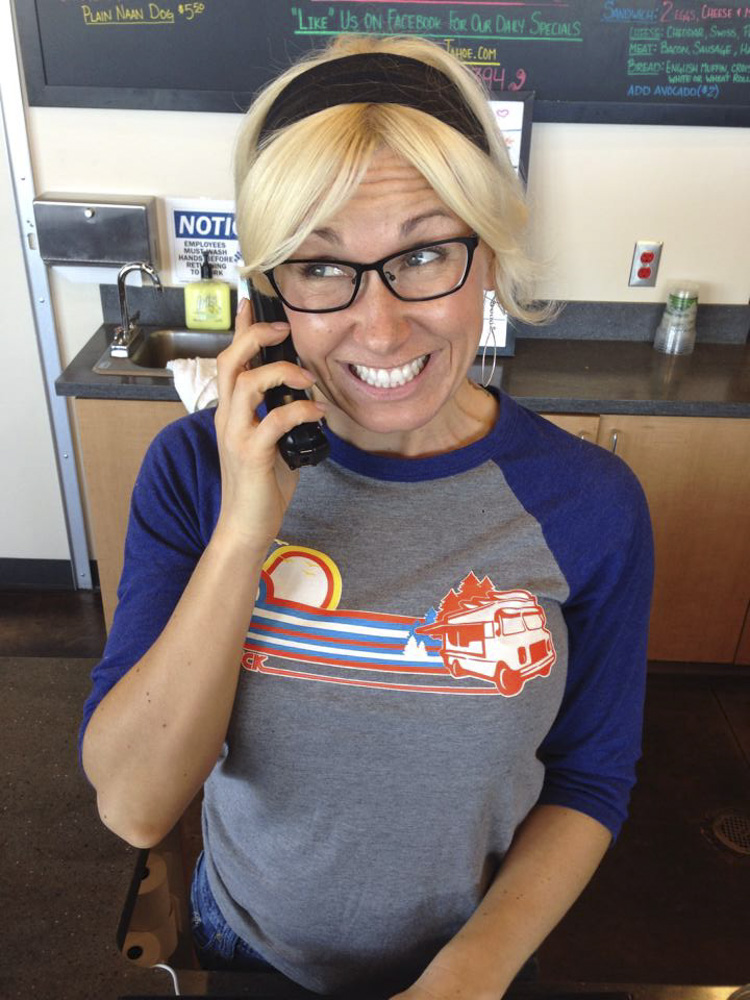 Some individuals are legendary for their ability to make people smile, and one of those people can often be found behind the counter of Red Truck. While Sophie Moeller has served food at Red Truck for almost three years, often recognized as “the counter girl,” her positive and philanthropic spirit stretches beyond the café and into two seemingly different worlds, theater and sports.

One of the most prolific actors in Tahoe, Moeller has been instrumental in helping to grow Truckee’s community theater program, in addition to acting in more than a dozen regional performances over the past several years, including her current leading role in Wonder of the World, showing at Brüka Theater in April. Because she’s always been equally drawn to the arts and to sports, her dedication to volunteering with groups that focus on theater and on athletics comes as no surprise. Empowering youth, whether on stage or on a trail run, motivates Moeller to her core and helps her find direction.

“I’ve found my entire life to be a contradiction; you’re supposed to be either an arts person or an athlete,” Moeller said. “I have my artsy secret life down in Reno and my active outdoorsy self in Tahoe … I’m never sure if I want to be a Mother Teresa or a Marilyn Monroe.”

As a child, Moeller was so “painfully shy” she was almost held back in school. Over time, her passion for performance and entertaining outweighed her fears of being on stage and pushed her to pursue acting ever since middle school.

“I started thinking an audition is the same as offering to volunteer for an organization where you don’t know anyone and walk into a room of strangers,” Moeller said. “I made a commitment to put myself out there.”

At age 24, Moeller packed up her truck and drove cross-country from her home in Cape Cod, Mass. in 2008, with nothing more than a friend in Truckee and a fantasy of moving West. After a year in town, Moeller moved to Hollywood to act until her mother was diagnosed with stage 3 breast cancer, bringing her back to Massachusetts. Over the following six months Moeller supported her mom through treatment, and dealt with unexpectedly losing her dad. She didn’t intend to return to Truckee, but the strong community ties she forged during her year here brought her back.

Though Tahoe didn’t offer the strong theater scene Moeller craved, within her first year here she trekked to Reno to audition with the Brüka Theater, and has kept active with Brüka in addition to Good Luck Macbeth, Reno Little Theater, and Vaude Villain Entertainment. She has also been crucial in building the Truckee Community Theater program alongside director Courtney Simson, by both starring in and directing productions.

Her first performance of 2015 is in Wonder of the World, showing at Brüka every weekend in April. Moeller was cast as the main character, a quirky woman at a major turning point in her life quite relatable to Moeller.

“Performing to me is my therapy and my outlet,” Moeller said. “It gives me focus and an opportunity to step out of my crazy brain and be someone else. Quite simply I love to entertain people and I love making people laugh.”

Ever since returning to Tahoe, Moeller hasn’t slowed down. On top of working at Red Truck four days a week, Moeller coaches for Girls on the Run and Disabled Sports Far West, which she’s worked with since 2008. For Disabled Sports’ annual fundraising event, Moeller relied on her strong local network to raise more than $5,000 for the program, the largest amount raised by a single individual.

“She’s so outgoing and positive and everyone has a great time who skis with her,” said Haakon Lang-Ree, Disabled Sports executive director. “She was truly the individual who did it above and beyond what [one person] would be expected to do. And then she showed up in a pink Power Ranger outfit.”

And Moeller does it all with a genuinely contagious smile.

“I have such a huge and enormous empathy and compassion to help. Whether it be children or disabled folks, I really feel the need to help in any way I can. And, quite selfishly, it feeds my soul,” Moeller said. “It’s my way of connecting in the world and find meaning in my own life.”

See Sophie Moeller in Wonder of the World every Thursday through Sunday in April. Showtimes and tickets available at www.bruka.org.