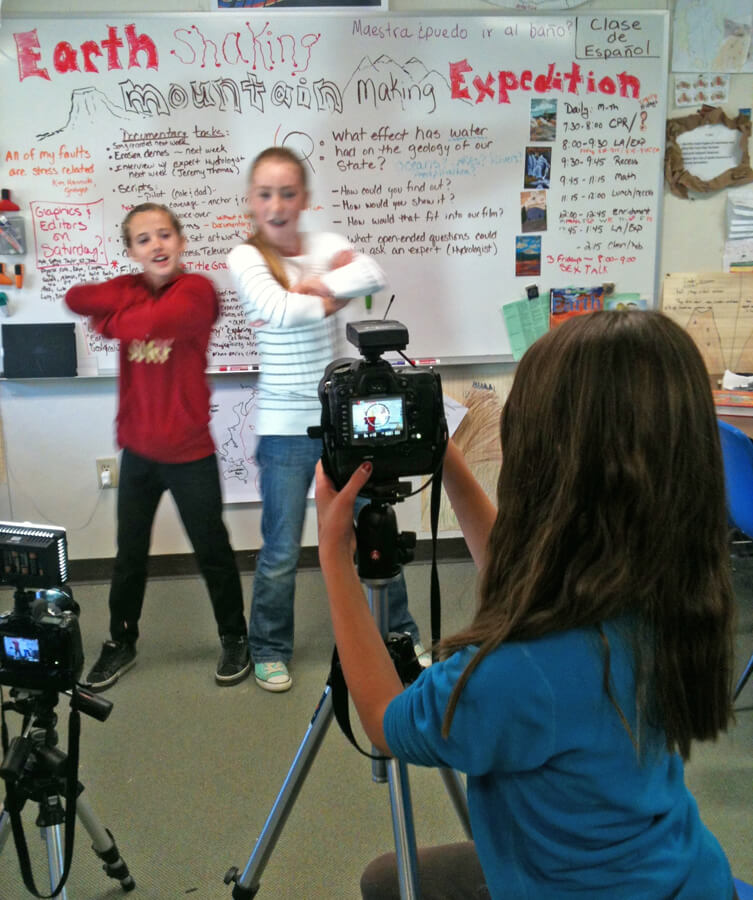 If you’ve ever doubted the creative abilities of middle schoolers, then you haven’t watched “Geology of California, 4,500,000,000 Years in the Making,” a documentary short film produced by last year’s sixth grade class at the Sierra Expeditionary Learning School in Truckee. Made almost entirely by the students with a little help and guidance from their teacher, parents, and a professional filmmaker, the movie was chosen as Best Educational Film in the 2012 Yosemite International Film Festival.

“Geology of Calfornia” was made by the 24 students in Reenie McMains’ 2011-2012 sixth grade class as the final project for the geology/earth science standard. The 25-minute film, which took a full semester to make, took the students to a national park, saw them interviewing scientists and other experts, and had them put in hours of work outside the classroom in an editing studio. The film has become a model project for the Expeditionary Learning school system.

Every “expedition,” which is a three-to-four month long interdisciplinary study of related topics, culminates in a final, high-quality project. McMains, whose husband Doug McMains is a documentary filmmaker for the Smithsonian, thought that children, who are already adept with camera phones and GoPros, would be interested in making a movie as their final project.

“What would be appealing for sixth grade kids?” she said. “Most kids are well versed in the technology of today. But could they make a professional-quality film?”

When McMains asked her students that question, and explained to them what it takes to make a film, the kids said they could do it. McMains started by listing all the production jobs, from script writer to video photographer to on-camera talent, and letting the students pick their tasks themselves.

“Because everyone got to do what they wanted, they felt like they had been part of the process that was meaningful to them,” she said.

Doug McMains gave the students one professional camera for the project, which they had to take turns using. But each cinematographer couldn’t just shoot willy-nilly; they had to justify what they wanted to film.

“If they saw a shot they wanted, they had to think through it, explain why they wanted it, and how to frame it,” McMains said.

The film is divided into four chapters — earthquakes, volcanoes, erosion, and water — and uses creative methods to explain certain geological phenomena. A ruler is used to explain the earth’s age in quarter-inch scale, with one inch equal to 20 years. When the ruler runs out of room, the film incorporates an animated representation of Intestate 80 as a measurement tool. A 12-mile distance from Truckee indicates the passage of 15 million years. The eastern edge of the North American continent, at Halifax, Nova Scotia, is 3,551 miles away from Truckee. That distance represents a time span of 4.5 billion years  — indicating to when the earth was formed. A seismograph is elucidated using a yogurt cup, a pencil, some string, and a cardboard box.

Appearing in the film are three experts the students contacted themselves to be a part of the project. These include Frank DeCourten, Sierra College earth science professor; Bill Hammond, a professor with the Nevada Bureau of Mines and Geology; and Jeremy Thomas, senior water resources scientist at NewFields River Basin Services.

McMains’ class also went out in the field, spending four days at Lassen Volcanic National Park, where they collected soil samples and filmed geology in action, and even got a chance to get some aerial shots of the park, thanks to Truckee Tahoe Airport General Manger Kevin Bumen, whose son Cole participated in the project.

In addition to classroom time, the students did all the post-production work, including artwork, graphics, and editing in Doug McMains’ studio, putting in 30 hours outside of school hours and working over Thanksgiving break. Doug guided them through Adobe Photoshop and did some photo editing, and parents did the Spanish translation, but other than that, the students did 90 percent of the film on their own, Reenie McMains said, including writing the script and formulating questions for the experts. There is even a rap song about tectonic plates written and performed by two students at the end.

“I am so extremely proud of my kids and what they did,” McMains said. “It didn’t matter if we won. To actually get an award was mind-boggling.”

The students were impacted as well by the recognition.

“The most lasting impression is that they can produce work of value in our community, even as a child,” McMains said, “that what they do is respected and valued, even though they are middle school children.”

The documentary was so successful that it is being used by the Expeditionary Learning national network of 170 schools as an example of a very high quality final product, according to school director David Manahan. The Sierra Expeditionary Learning School, which opened in 2010, is a Tahoe Truckee Unified School District charter school with 160 students in kindergarten through seventh grade (eighth grade will be added next year).

“It’s pretty impressive what they did,” Manahan said. “They had guidance, but the kids did all the work.”