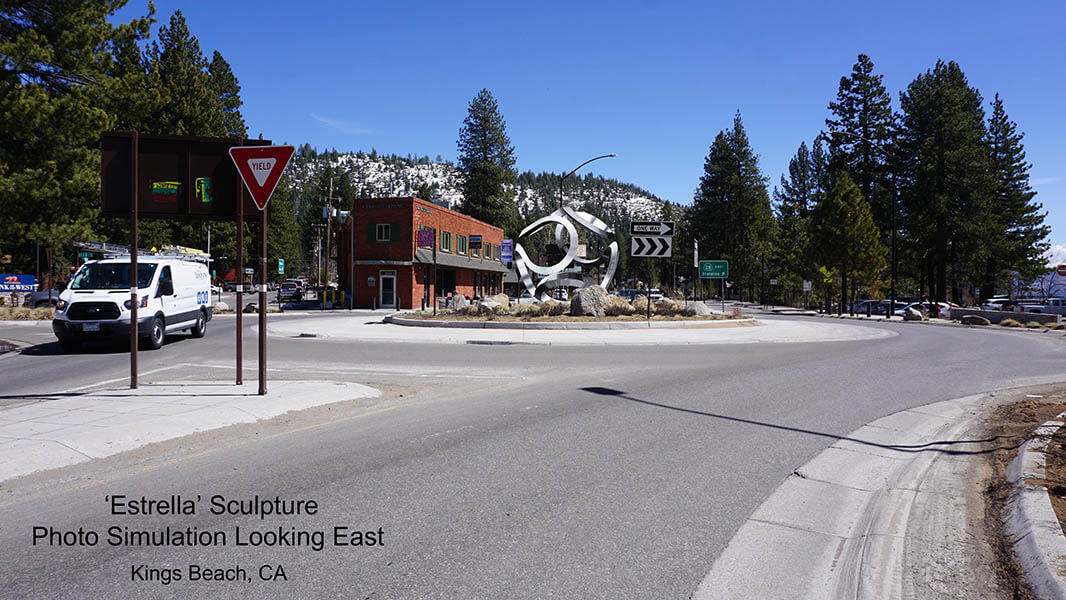 In October 1977, Tahoe City erected its first piece of public art in the “wye” roundabout: the Three Mackinaw trout sculpture. For nearly 41 years, the 20-foot-high welded metal art piece mounted on large boulders welcomed all to Tahoe City, becoming a landmark and centerpiece of sorts.

But in May, the fish sculpture came down from its longtime home at the intersection of highways 89 and 28 due to construction of the SR89/Fanny Bridge Community Revitalization Project. The disassembled piece now sits in a construction yard in Sacramento, property of the Federal Highway Administration — the lead agency on the project — a casualty of a disagreement between the artist and transportation officials, also a signifier of the greater disparity between art ownership and artists’ rights.

‘THE FIRST OF IT’S KIND’

When John Betts created the three-fish sculpture in the late ’70s, public art in California was just burgeoning. No state or federal laws existed yet to protect artists’ rights, the California Department of Transportation (Caltrans) had just started its transportation arts program, and a long-haired, 21-year-old Betts signed no contract and took no money for his creation.

An Aug. 4, 1977 Tahoe World article stated that Betts’ sculpture “could be the pilot project in a statewide highway beautification campaign,” while a Sept. 7 Sierra Sun article in the same year boasted that the piece “was the first of its kind to be considered under Gov. Edmund Brown Jr.’s new Highway Arts Program.” According to a 2016 Caltrans MileMarker report more than 400 murals, installations, and fixtures have been added to the state highway system through the program since then.

Despite its historic significance, the fish sculpture has been at the heart of an ongoing debate between Betts and officials in charge of Tahoe City’s revitalization project since breaking ground. When the $35.5 million transportation project was approved in May 2015, there were no plans to relocate the sculpture. Caltrans originally issued an encroachment permit at the wye so the statue could be placed there, but wanted Betts to sign a contract waiving his rights to the piece so they could later move it, while Betts insisted the construction project be either redesigned around his sculpture or the piece be purchased for $8 million.

To complicate matters, North Lake Tahoe Resort Association is the actual owner of the encroachment permit and the statue, as the Chamber of Commerce (which falls under the NLTRA umbrella) was issued the encroachment permit when the piece was erected. So it was Cindy Gustafson, CEO of the NLTRA, who was sending letters back and forth with Betts to negotiate a deal.

“We don’t have a huge budget, nor do we have experience in public arts,” said Gustafson, noting the NLTRA worked with Betts to find a new home for the fish sculpture, and community members jumped in to help. “It’s a part of our legacy and history … We hope to come up with a resolution that he would be comfortable with.”

Betts does not want to give up the rights to his art piece. A retired archeologist, the fish sculpture is the only piece of public art the Tahoe City resident ever made. When he made it, artists’ rights did not exist, however, they do now. Betts, who has retained a lawyer in the matter, said he believes he has rights and plans to keep them.

“I don’t want to waive my rights because if they move it and it gets messed up, I have no recourse,” Betts said. “This is a piece of art. I want to ensure the artistic integrity of my work.”

California was the first state to address artists’ rights, creating the California Art Preservation Act (CAPA), which was enacted in 1979 and provides legal protection for artists’ moral rights in the state. The Visual Artists Rights Act (VARA) was passed in 1990, and was the first federal copyright legislation to grant protection to moral rights, allowing artists additional rights to their works, regardless of whether they physically own the piece.

These two laws are significant in that they allow artists to retain copyright of their designs, as well as retain other moral rights. However, in 2016 Caltrans revamped its transportation art policies, asking artists to waive their VARA and CAPA rights.

So, any art located in a Caltrans right-of-way becomes property of the state. This includes the roundabout art, which is prolific in Tahoe and Truckee.

For professional artists like Troy Corliss, giving up copyright to a design is unacceptable. Corliss created the flowers in 2010 in the roundabout by the Truckee Community Recreation Center and was also slated to have his creation Leaf Sails featured in one of the Kings Beach traffic circles as part of the Kings Beach Commercial Core Improvement Project, but backed out when presented with the new Caltrans contract.

Corliss’ piece, featuring crushed glass in leaf-shaped transparent panels encased in a stainless steel frame, was chosen by the public during a lengthy process in March 2015 to stand in the roundabout, but Corliss pulled out after hearing of the new guidelines in 2016.

“For me, that was the end of the road,” Corliss said. “I could not sign the agreement as written. I had to choose to let this project go because I wasn’t willing to give up copyright to my design.”

The Truckee artist has created more than 100 largescale public art pieces over a 26-year period. He stated that this was the first time he had ever been asked to give up his intellectual property rights on one of his designs. If he had signed the agreement, then he would not be able to use any aspect of the design in the future, limiting his creativity as an artist.

“Removing a design from the artist’s vocabulary will effectively halt the development of that body of artwork and will likely impinge the artist’s ability to promote previous works of art that led up to and are similar to the copyrighted work,” Corliss said, “therefore, directly inhibiting their ability to get work. Most established artists won’t even consider a project that asks them to give up their design because of the impact it could have on their career.”

The new Caltrans transportation art guidelines also prohibited the other chosen Kings Beach public art piece, Swimming With Friends, from going in due to a kinetic component to the sculpture. However, two other pieces that were finalists in the public process – Daow Aga and Estrella – are slated to be installed in their respective roundabouts by November.

In June 2017, the Placer County Board of Supervisors approved a grant contract with nonprofit Tahoe Public Art to allow $209,152 of Transient Occupancy Tax (TOT) funds to be used to manage installation of the artwork for the Bear and Coon street roundabouts as part of the Kings Beach improvement project.

Reno-based artist Brett Moten, who created Daow Aga, did agree to sign the Caltrans contract and to waive his artists’ rights, but not without some hesitancy.

Moten said he did not correspond directly with Caltrans, but that Placer County negotiated on his behalf. Under the Caltrans transportation art guidelines, public agencies must apply to place art in Caltrans’ rights-of-way, instead of artists applying themselves.

AN ANT HILL OF A PROBLEM

The public agency caveat does not allow for so-called renegade public art to be resurrected in Caltrans rights-of-way. Truckee firefighter and metal worker Matt Parkhurst found this out the hard way in 2016, shortly after the new Caltrans transportation art policies were enacted.

Overnight in July 2016, Parkhurst placed a 3.5-foot-tall metal red ant at the Truckee roundabout at Prosser Dam Road because it looked like an anthill. At the time, Parkhurst said he couldn’t figure out how to apply to erect his artwork there, so he gathered some friends and just put it there.

“I hate that term ‘renegade,’” Parkhurst told Moonshine Ink at the time. “But there was no form about how to place the art … no formal way of submitting.”

The Town of Truckee removed the ant sculpture within 48 hours and relocated it to land near the Humane Society of Truckee-Tahoe. The town ended up buying eight ants from Parkhurst for $15,000 and negotiating with Caltrans on an encroachment permit to place them in the roundabouts leading to 89 North.

Parkhurst, who is not a full-time artist, relinquished his rights to the ants because he “knew Caltrans would be concerned about a location-specific sculpture, which is why I was willing to sign over the rights.”

“Public art enhances the community,” Parkhurst said. “If art brings out an emotion in someone, it affects them and makes them a part of their environment.”

While artists ponder whether or not to comply with Caltrans art policies, grandfathered pieces like the Tahoe City fish sculpture are still in a grey area. Caltrans contends it wants to own the art in their right-of-way so they can have ability to move or destroy pieces if needed, but artists like Betts are hesitant to give up their rights.

This leaves the mackinaw sculpture in limbo.

“We have not been able to arrive at any satisfactory solution to get it moved,” said Carl Hasty, district manager of the Tahoe Transportation District, which is the local lead agency for the Tahoe City revitalization project. “Mr. Betts is very impassioned about this, and that is understandable … Everybody is still open to the idea of finding a home for it.”

But artist Betts isn’t backing down.

“Because these bureaucrats can’t figure it out, it went away,” Betts said. “I can’t put it back. I can’t make it over … It’s never coming back.”

~ Helena Guglielmino contributed to this article.

Public Art, in a Roundabout Way