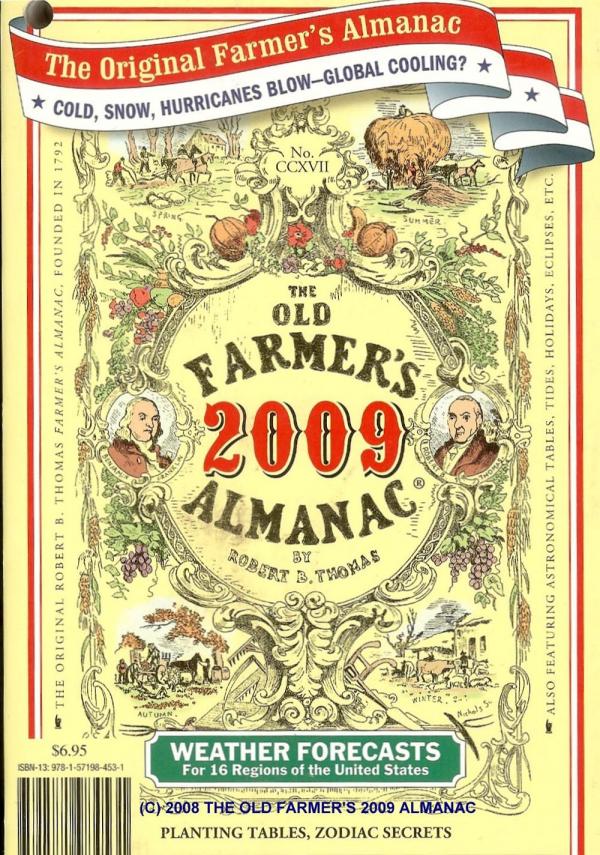 Last month I gave you a taste of what farmers are all about, and how farmers markets are a great place to meet your farmer and get the freshest produce available during the season. This month I will cover another great way to get fresh produce from farmers through a program called Community Supported Agriculture, or subscription farming. I will also introduce you to our bible, ‘The Old Farmer’s Almanac,’ and what’s in it for 2010.

Joining In on CSA

I know that many of you are working during the day and you aren’t able to get away to shop at a farmers market. A CSA is a great way that you can still get fresh produce from a farmer weekly, throughout the season.

CSAs began in Japan over 30 years ago. They called it teikei, which translates to ‘putting the farmers’ face on the food.’ The concept made its way into the U.S. and Canada in 1985, and today there are over 2,000 CSA programs. A CSA is a way for the public to create a relationship with a farmer, or farms. Think of it as subscription farming, just like buying a subscription to a magazine. A person subscribes with a farmer for a 16- to 20-week period for a specific price, and in return, when the crops are harvested, they receive a weekly amount of produce. The pre-payment to the farmer is a guarantee that the two to three months he or she spends buying the seeds, planting, and harvesting, will be sold to the subscribers. The cost is usually about $25 per week for a basket of produce to be picked up at a designated central location.

For farmers, Mother Nature dictates our every move. She affects our seasonal, weekly, and even daily activities. For us farmers, ‘The Old Farmer’s Almanac’ is our bible. Whether you are planting by the moon, trying to predict when to start planting, or estimating that last frost, we all revert back to the almanac. Even if you’re just a home gardener or like interesting reading, the almanac has something for everyone! It covers astrology, gardening tips, astronomy, calendar events, facts and figures, regional forecasts, health tips, recipes, and amusing articles. In addition, it gives you planting dates, what to plant by the moon, and even gestation periods for livestock.

So how accurate has ‘The Old Farmer’s Almanac’ been in predicting the weather?  Robert B. Thomas, the man who founded the almanac in 1792, derived weather forecasting from a secret formula. Thomas believed the Earth’s weather was influenced by magnetic storms on the surface of the sun. Three scientific disciplines are utilized today to make long-range predictions: solar science, climatology, and meteorology. The forecasts look at temperature and precipitation deviations based on averages and 30-year ‘normals.’ Over the life of the almanac, they claim to be about 80-percent correct. For 2009, their regional forecasts were 88-percent accurate in predicting the winter of 2009, and within 1.2 degrees of the winter average temperatures. That’s good enough for me!

What does ‘the farmers’ bible’ say for 2010? The Truckee/Tahoe area is in region 16, the Pacific Southwest. The almanac predicted a mild El Niño this winter along with above normal snowfall in the Atlantic regions. For us and the upcoming year, April, May, and beyond will be cooler and rainier than normal. The hottest periods will be July, early August, and late September. As a whole, September and October will be warmer and drier than normal. There will be four eclipses in 2010, but only one visible in North America on Dec. 21.

Let me leave you with this thought for March:

‘Shake the hand that feeds you.’
– Michael Pollan

~ Gary Romano owns Sierra Valley Farms, which sits on some of his family’s original 3,600-acre ranch in Beckwourth, Calif. Visit sierravalleyfarms.com. Comment on this story below.