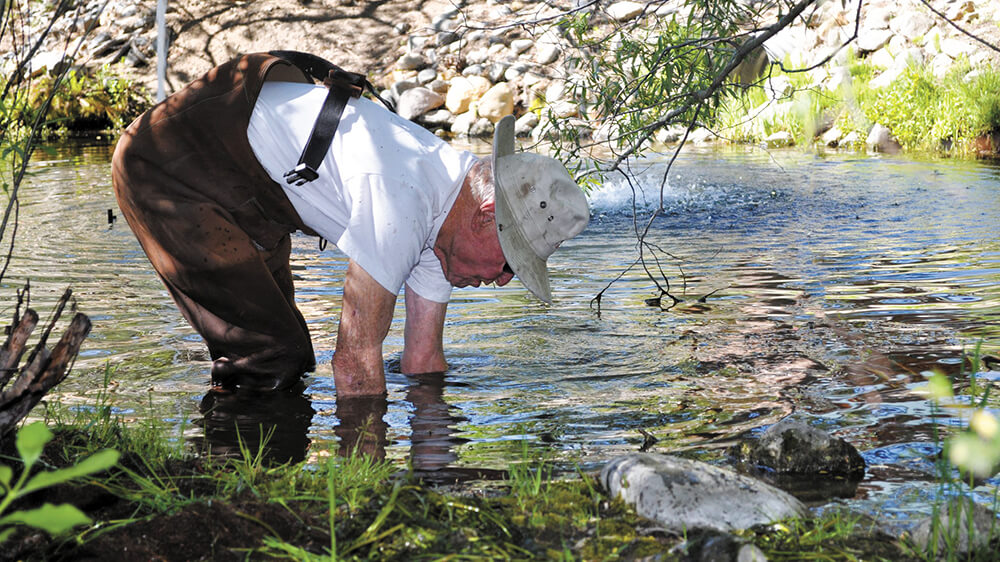 David Dudley McBride, Tahoe City, died peacefully at 96 with family surrounding him. Dave was a cornerstone to the living landscape of the Tahoe community, contributing many hours, plants and opinions. We will miss his personality throughout the nursery. He is survived by his baby sister Sally Beckham; daughters Karen McBride (husband Fil Aguirre) of Tahoe City, Dianne Anderson (Doug Anderson) of Tucson, Arizona, and Leslie Hyche (John Hyche) of Tahoe City; grandchildren Ryan Anderson, Greg Anderson, Kevin Hyche, Kelsey Hyche, Patrick Stimac; and great-grandson Davis Anderson. In lieu of flowers, donations in his name may be made to Sierra Senior Services, and Meals on Wheels. Friends are invited to join in celebrating his life Saturday, Sept. 22, 1 p.m., at the Tahoe Tree Company.

An excerpt from the 2016 Uncle Dudley Among the Natives

In the summer of 1939, a young man named David Dudley McBride took a summer job washing dishes at Meeks Bay Resort, and thus got his first taste of Lake Tahoe. Over time, Tahoe had gotten inextricably into McBride’s blood, and by 1950 he was working hard to develop a livelihood that could sustain him and his growing family at the lake year-round. He and his young wife Katherine (known by all as “Chick”) had their daughter Karen and her future siblings to consider.

Harvesting Christmas Trees was McBride’s entrée into the world of Tahoe agriculture. It is brutal, demanding work compressed into a short season, but this circumstance represented no great difficulty for the supremely fit McBride, and actually aided the development of other aspects of his plan. As he widened his contacts with old-time Tahoe woodsmen and gardeners, he began to learn the habits of native plants, long-favored for their adaptation to Tahoe’s harsh winters and short growing seasons.

In the spirit of Henry Kaiser, McBride was determined to find a need and fill it, and soon he was the man to see for firewood, fence posts and cedar rounds. In conversations with owners of lakefront estates too small to warrant a gardener on staff, he became aware of a widespread desire for some landscaping beyond what Mother Nature had provided. It was time to make the move.

With the help of Tahoe City pier builder and neighbor J.W. “Jim” Williamson, McBride secured a long-term lease on a portion of the 64-Acre parcel, and there he and Chick began to expand the various aspects of their business.

In every small town, civic betterment is largely the work of concerned individuals, and as Tahoe City began to think about how it looked to the world at large, Dave McBride played an important role in helping it put its best foot forward … in a huge community effort directed by McBride, the athletic field at the newly-completed North Tahoe High School was sodded, and there were many other commitments of time and materials over the years.

And now another three decades have evaporated before our eyes … It is a pleasure to recall a vibrant personality whose vision has done so much to make Lake Tahoe more beautiful. Thank you, Dave!

Obituary: David Dudley McBride, a Part of Tahoe’s Living Landscape
Business
8:15 am / 9:15 am