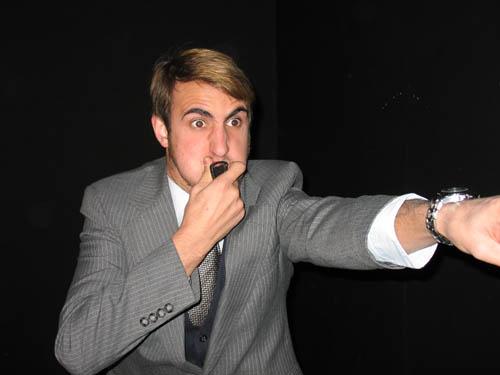 From down-home bluegrass to comedy improv to scintillating drama, the Center for the Arts in Grass Valley produces shows for pretty much the entire entertainment spectrum. Sometimes on the same day. On Jan. 13 Sticki Vikki and the Pinecones will be performing a rock-a-billy dance concert. On another stage will be a ‘no-holds-barred competition pitting eight young comedians against one another in various improvisational theater games.

The Comedy Improv Competition, ‘Improvers’ Nation: No Scripts Attached,’ – event organizers compare it to the show ‘Who’s Line Is It Anyway?’ – provides a unique opportunity for young local comedians between the ages of 16 and 28 to showcase their budding talent.

Pleasant Valley Pheasant Pluckers and a few individuals from the Nevada Union Theatrical Society will split into two teams of four. They are put on the spot and judged by the audience’s reaction, said facility supervisor Tyler Friesen. The teams have two chances to win over the crowd with two different versions of comedy. For the 7 p.m. showing is a lighter side of comedy for the possible kiddies in attendance, then at 10 p.m. a more uncut and raw side of humor can be explored for the 18-and-up hour. ‘It is hard to find family-friendly comedy…with two shows we are able to reach a broader audience, bringing kids as young as five to shows,’ Tyler said. Both shows on Dec. 16 sold out, he said, and left audience members clenching their guts after fits of hysterical laughter.

This is the first year the Center for the Arts in Grass Valley has produced a show of this nature. The next show will be Saturday Jan. 13. Seats fill up fast so Tyler stresses reserving seats early. However there will be a few more chances to catch this laugh-fest on Feb. 24, March 17, and May 5. (Some dates are tentative. Check thecenterforthearts.org.)

From comedy to sass and diva power, the month at the Center for the Arts continues to heat up as the Community Players present ‘Sultry Ladies and Red Hot Mammas: The Return of the Torch Singer,’ running from Jan. 18 to Feb. 10. This show will be a two-hour Cabaret Review directed by Margot Malone. Inspiration does come from Torch singers of the past, such as Peggy Lee, Julie Lee, Ella Fitzgerald, and Dinah Washington but it also stems from amazing local soloists.

‘I was stupidified at first with the number of talented people who showed up to audition. I had to turn away 20 more people as the cast list was finalized,’ Margot said.

She says she has always been fascinated with the Torch era, a time when female soloists rose up in jazz and blues, combining the two to make elaborate performances with dynamic sound. ‘The concept behind this show was to get bluesy, jazzy singers together. I wanted to punch it up a notch by incorporating some outrageous ladies,’ she said.

Each soloist will perform two songs. ‘It’s unusual to find performances with this many soloists. It has made the show evolve on its own, which has been one of the most exciting aspects of putting this show together,’ Margot said.

Watch out! AirAligned aerial dance group will return to the Center on Jan. 26 and 27 with acrobatics, dance and Cirque du Soleil-style aerial works. This high-energy performance boasts intense choreography, powerful martial arts, breathtaking drops from high overhead, and the use of trapeze, hoops and aerial fabric. AirAligned, founded in 2002 by artistic director and choreographer Tresa Honaker, has performed in corporate and commercial venues nationwide. Background training for the group varies from member to member, but includes classical dance, gymnastics, and in-depth training in several forms of martial arts. Show starts at 8 p.m. Seats are $20 and reserved, so early purchase is advised. For information on AirAligned, visit airaligned.com.

Moving into February, the Center for the Arts presents a theatrical production of ‘The Grapes of Wrath’ directed by Diane Fetterly. Remember Peter Fonda in his McSteamy days, the dust bowl, impoverished Americans tromping across America to settle in the promise-land California? With the help of music director Sands Hall, this timeless American road story will be put to life on stage Feb. 13.

For information on these or the many other Center for the Arts productions, visit thecenterforthearts.org or call 530-271-7000.

Music, comedy and theater, oh my!
Sports & Outdoors
All Day