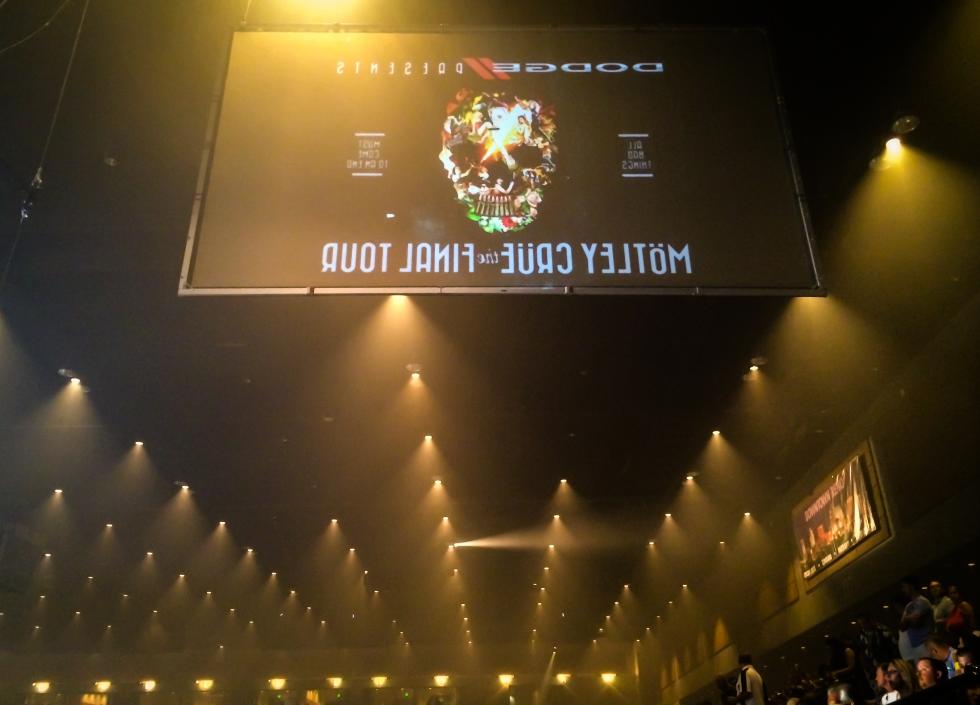 In a poetic finale to its 34-year musical career, Mötley Crüe is embarking on a two-year, worldwide Final Tour that comes with the tagline “All Bad Things Must Come To An End.” Mötley Crüe — made up of bassist Nikki Sixx, drummer Tommy Lee, singer Vince Neil, and guitarist Mick Mars — has come a long way from their reckless ways on the Sunset Strip in Hollywood. The band’s stop in Reno on Friday, July 25, a relatively small stop by national standards, is a testament to its dedication to its loyal fan base, and was almost completely sold out. From Sixx’s flame-throwing bass guitar to Lee rocking the stage with cymbal-smashing devastation and pure mayhem, not much has changed since 1981.

You could feel the electricity building in the small arena before the show began and Mötley Crüe’s opening act, Alice Cooper, needed no introduction. After Cooper’s set, Mötley Crüe came on stage, looking relaxed and opening with the newer song Saints of Los Angeles. The acoustics in the Reno Events Center are not the best, but after the band’s second song, Wild Side — off the 1987 album Girls Girls Girls — the sound improved dramatically. Lead singer Neil has never been known for his onstage voice, and most of the high-pitched falsetto you hear from him comes from studio albums. The Reno performance was no different, with Sixx, Lee, and Mars driving the band and creating the heart-pounding sound that is Mötley Crüe.

Reflecting on the final tour, Sixx sat down on stage, demanded that the crowd sit with him, and told the story of the Crüe. In 1981 they went into a rehearsal studio in Burbank, Calif. Sixx handed Neil the lyrics to Live Wire, Mars ripped into the guitar riff, Lee started smashing the drums, Sixx picked up his base, and at that moment in January 1981, Mötley Crüe was born. As soon as Sixx finished the story, the band immediately kicked into Anarchy in the UK a Sex Pistols cover.

Getting to the core of the band’s discography, the set continued and the crowd was transported back to the earliest days of the band, to memories of Marlboro reds, Camaros, teased hair, and Busch pounders. The band rocked Smokin’ in the Boys Room and I remember singing that song in high school, I guess because we always tried to do just that. When the Crüe played Girls Girls Girls, the boys were joined by leather-clad stage dancers, of which one was Lee’s fiancé.

As the crowd heard lyrics about the darkest depths of hell, bloodstained streets, and “those who have the youth have the future,” along with Lee’s cymbal smashes and Mars’ guitar riffs leading in, fans knew exactly what song was next Shout at the Devil. Mötley Crüe’s defining song, Shout at the Devil captured the rebelling youth spirit of America in 1983.

Kickstart My Heart, is another Crüe song that can rip your face off when played at max volume (actually that’s the only way to play this song) and the band did! For the encore, the Crüe played on a separate stage toward the back of the arena. Lee sat down at a piano, which meant there was only one song left for them to play, Home Sweet Home.

As a teenager, when I first heard this song live I was hooked. Home Sweet Home encouraged me to dream big and go to concerts, and I wouldn’t want any other song to finish out this show. Plus they did it in grand style on a stage that rose 30 feet above the crowd. As Lee played the last notes Home Sweet Home, I felt it was the end of an era. Like the Crüe has always done, they went out in style. Well done boys, you’ll be haunting me forever.

Jon Margolis is an avid photographer in the Tahoe region. Visit his photography website.

Ahead of the Curve