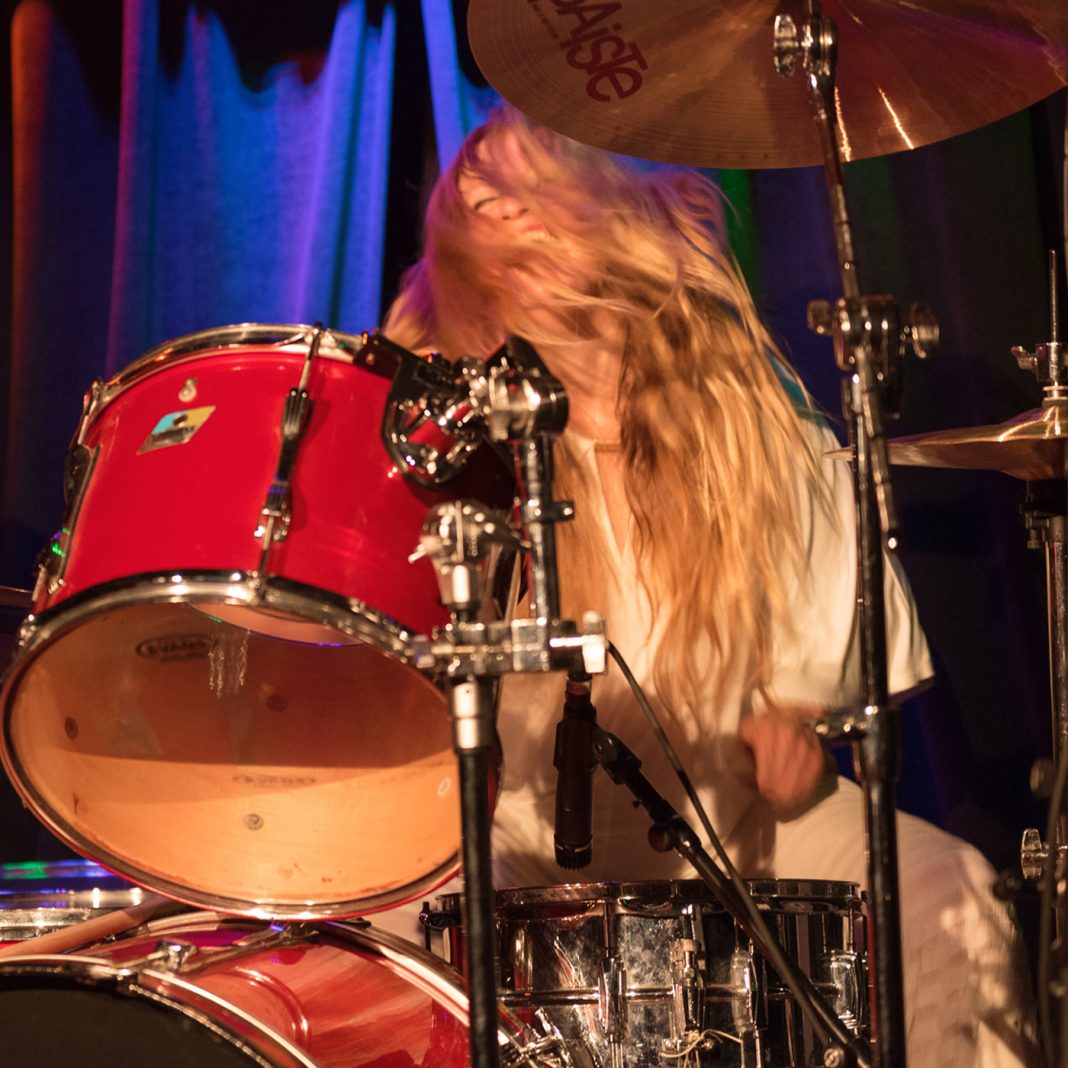 Our first two Tiny Porch Concert performers (Poor Man’s Whiskey and Fruition) played covers Like a River and Long Monday, respectively. When we got a member of Zepparella, an all ladies Led Zeppelin cover band, on our porch ou can bet we were expecting Black Dog or something of that ilk. Well — we ran into some licensing issues — and ended up with something way more fresh, despite being written almost 30 years before the Yardbirds changed their name.

In this third installment of Moonshine Ink’s Tiny Porch Concerts, we welcomed Clementine and Daniele Gottardo to our back porch sanctuary, where they played a serene version of “I Thought About You,” a slow, jazzy tune written in 1939 by Jimmy Van Heusen with lyrics by Johnny Mercer. We chatted with Clementine later via email about being a member of an all-ladies rock group, how playing a cover is different from playing an original, and the legalities of playing someone else’s songs.

In Zepparella you take on the John Bonham role by playing drums, but, when you performed for our Tiny Porch Concert you left the drums at home and sang with a beautiful jazz guitar accompanying you. Tell us a little bit about your musical repertoire. What is your favorite genre to perform? On drums, it’s rock, funk; heavy-hitting stuff for the most part, although I do love playing behind singer/songwriters as well. I adore jazz standards and the great female singers of yore, so that music is a passion of mine, and what I sing in the shower. It’s a treat to get a chance to sing a couple of those songs for real. Daniele Gottardo is a spectacular player and a great friend, and we’ve been working up a couple of these tunes to release to the public. Tiny Porch was a fun opportunity for us. I also sing my own material in two bands: Stars Turn Me On, which is American Rock, and Beaux Cheveux, which is in the Dream Pop genre. Basically, I dig it all!

Zepparella is an all-ladies rock group — you were also a part of AC/DShe — what is it like playing with only women, covering groups that were all male? I have been in female bands from the beginning of my career, and the only thing I can figure out about that is that these have been the folks who have had the same kind of goals and work ethic that suited me. Many of my heroes in music were male, so I never really thought much about playing men-band material. It was more like — I love these songs. Phil Rudd and John Bonham were my influences, so I guess it just made sense to play the music that was in my bones.

How is playing a cover different from playing an original? Great question. I equate it to the difference of writing a sonnet or writing free verse. A sonnet has a strict rhythmic and rhyming structure, so in a way it’s very freeing. The structure is all spelled out for you, so all you have to do is express your story and use your talent for beautiful language. When I’m playing an original song, I have to start from the ground up, and there is a lot more questioning, a lot more struggle to craft the exact right drum part. In both scenarios, I get to find my voice and play like me, but one comes with a bit less angst.

Led Zeppelin is arguably the best rock ’n’ roll group of all time; Stairway to Heaven, for example, has earned almost $60 million in royalties. How do royalties affect Zepparella? They do not! Cover bands can not monetize on their versions on YouTube, and we pay royalties when we put out any recordings. So we pay a percentage to the band for anything we record. For live performances, the venues are in charge of paying annual fees to ASCAP and other companies who collect for artists. So we can play the songs live, but when we record them, we pay to do so. YouTube does not allow monetization on cover songs. Our recordings therefore are more for entertainment, promotion, and posterity than for anything else.