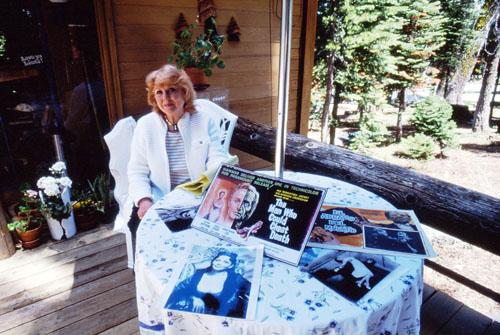 One would never guess upon meeting Hazel Court that this lovely mountain woman used to spend her days covered in blood, consorting with hell-beings. In horror films from the 1950s and 1960s, Court starred with legends of the genre such as Vincent Price and Boris Karloff.

The daughter of a professional cricket player, Hazel Court made her film debut at age 18, featured in the early horror films produced by Hammer Studios in her native England. She got her big break in Hollywood at age 30, starring opposite Peter Cushing in ‘The Curse of Frankenstein,’ and then followed that up with another blockbuster, ‘The Raven,’ with Price, Karloff, and Peter Lorre.

After retiring from her 35-year career in film and stage, Court began a second career in painting and sculpting. Her works appear in a number of galleries – from Italy to San Francisco – and at public venues, such as the sculpture unveiled at Penn State University. Her latest sculpture can be viewed in Sierra Nevada College’s Environmental Building.
Court turned her vacation home in Alpine Meadows near Lake Tahoe into her full-time residence in 1999, after the death of her husband, Don Taylor. Taylor was the director of such films as ‘Escape From The Planet of the Apes’ and ‘Island of Dr. Moreau,’ and also the actor who gave Liz Taylor her first on-screen kiss.

Hazel’s autobiography ‘Hazel Court – Horror Queen’ comes out in November. Published by England’s Tomohawk Publishing, it will be available on Amazon.

‘It’s not just about horror and Hollywood, but my life. I talk about Churchill to Judy Garland,’ says Hazel.
Hazel has adapted marvelously to mountain life. She is active in the Bear League, Sierra Nevada College, and other local charities. And although her neighborhood is snow-laden in winter she has refuses to build a garage because it would require cutting down trees.

‘Which would you rather see,’ she asks,’ some building or a beautiful part of nature? If you appreciate nature, you appreciate the world. We shouldn’t be walling in the wildflowers.’

Question: Being a horror film actress must have had taxing moments. What’s the worst thing that ever happened to you on-screen?
Hazel: In the film ‘Premature Burial’ (1962), Ray Milland buries me alive. I’m down in this tomb and, while filming, the crew is shoveling dirt on top of me. I have a straw in my mouth so I could breath, but then it was removed and I had to hold my breath for 90 seconds or so. That was tough! In the ‘Masque of The Red Death’ (1964) I brand myself, then the hands of a giant possessed clock kill me. There was a lot of blood in that scene. A real mess.

Q: Your co-stars played such terrible men in the movies. What were they like in real life?
Hazel: Peter Cushing was one of the loveliest men you could ever meet. Peter Lorre was very funny, always playing practical jokes. And Vincent Price was such a good friend. Boris Karloff…they all were the dearest people and extremely cultured.

Q: You worked awhile with Alfred Hitchcock.
Hazel: He was a brilliant man, but I’m not sure he particularly liked actors. Once, while filming a television episode he says to me, ‘You must be bad-tempered in this scene, but if you’d rather not I’ll do it with the camera.’ I was aghast. Here I was, trained in the famous Birmingham Repertoire Company, and Hitch didn’t think I could act. My costar, Lawrence Harvey, turned to me and winked. ‘He’s teasing you, don’t worry,’ he said. My husband ended up working under Hitchcock, and we became good friends.’

Q: Who was the scariest villain you ever acted with?
Hazel: I’ve made films with Boris Karloff, Christopher Lee, Peter Cushing, Peter Lorre, and Vincent Price, but Anton Diffring could raise the dead. He was rather scary. I played opposite of him in ‘The Man Who Could Cheat Death’ (1959). It was about a man who wanted eternal life.

Q: Who was the sexiest villain?
Hazel: Vincent Price and Christopher Lee were very handsome men, as was Roger Corman, who directed me in five films. I’d have to say Kirin Moore whom I starred with in ‘Dr. Blood’s Coffin’ (1961). He was a very good-looking man.

Q: You were pretty sexy yourself, in fact downright ravishing.
Hazel: Thanks. I’ve always had a big bust, but it was never bigger when, newly pregnant with my son Jonathan, I filmed ‘The Raven.’ One reviewer wrote that I was a, ‘sexy, lusty redhead in whose cleavage you could stash the complete works of Edgar Allan Poe along with a bottle of his favorite booze.’ It’s my favorite review.

Q: What was your favorite role?
Hazel: In 1962 I starred with Edmund O’Brien in an episode of ‘Sam Benedict’ on CBS. I played a beautiful pathological liar who fooled everyone. I really enjoyed working with Edmund. There was a court scene where he jumps up on a chair and recites Shakespeare. He had the whole cast in awe. He was truly wonderful.

Q: Would you ever like to return to film?
Hazel: I loved every day of my film career, every moment. But after I had my son Jonathan I decided to stay home. I wanted to be there when he came home from school each day. My sculpting career came along. Anyway, I believe there’s a time when an actor or actress should retire. Few can pass the test of time. Audiences get tired of looking at you.

Q: What do you think of the horror genre today?
Hazel: Not much. They rely too much on blood and gore. In general, Hollywood seems to have lost much of its glamour. I don’t get Ben Affleck and Jennifer Lopez. They don’t seem to have any of the romantic qualities of say Gregory Peck who recently passed or Greer Garson. I played her part in the stage production of ‘Random Harvest,’ the role in which she won the Academy Award.
I must admit I was impressed with Russell Crowe in ‘A Beautiful Mind.’ He humbled himself in that role.

Q: Why did you decide to leave southern California and move to Tahoe?
Hazel: Don and I lived in Santa Monica in a beautiful home built by popular saxophonist Don Clarke. The music room was where Bing Crosby cut his first recordings. Don (Taylor) had directed Peter Graves in ‘Five Man Army’ (1969), and we’d all become friends. Peter and wife Joan lived at Lake Tahoe, and we came to visit. Soon after we bought the cabin and it became our weekend retreat. After Don died, I didn’t want to be in the big house. I sold it to Andy Summers of the rock band The Police and moved to Tahoe.

I was very sad after my husband died. The trees and nature up here spoke to me and helped me overcome my sadness. The mountains are very inspirational. There’s a lot of strength and power you can find living in the mountains. I communicate with my trees. An incredible energy comes from trees, from nature.

The first week I moved into my home in Bear Creek a wolf came and sat on my deck. People tell me there are no wolves around here, yet that’s what he was. He was most beautiful. He’d lay on the deck and sunbathe as if saying ‘Sculpt me!’ – such beautiful lines. One day he finally left, walking away.
Then he stopped and looked over his shoulder directly at me as if saying goodbye. Much of my sorrow seemed to lift when he left. I’ve never seen him since.

Q: You’ve lived an incredible, exciting life.
Hazel: I like to say knowledge is eternal. I’ve learned so much being around my wonderful friends such as Vincent Price. Vincent bought my first painting. He wanted me to give up acting and become an artist. He really opened up a lot of doors, but more than anything, he made me believe in myself as an artist. He was such a wonderful dear man. I was at his side during his passing and he was wonderful to the end. His parting advice to me was ‘Always make sure it’s the real thing.’ 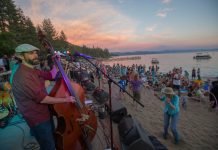 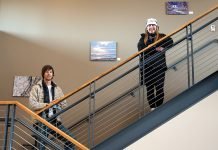 Artistry is in the Air at Truckee Tahoe Airport