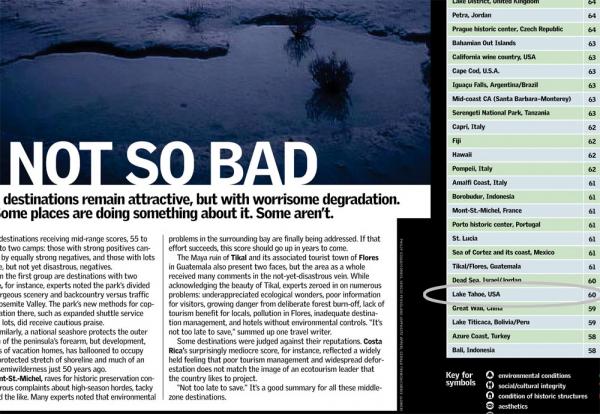 In September, a senior editor of National Geographic Traveler criticized the Lake Tahoe tourism industry for offering visitors not much in the way of ‘local flavor,’ or ‘identity.’ The critique came from Jonathan Tourtellot who, for the last 11 years, has been making waves in the travel business with a set of ideas he calls ‘geotourism.’

Geotourism rests on the premise that the unique histories of destinations should be preserved, the natural resources in a given location protected, and the culture of a place supported in all of its variety and contradictions. Tourtellot certainly didn’t invent these ideas, but he did give them a twist: tourists like it when these things happen, and the money the tourists spend can be used to support not only the economy of a destination, but its culture, environment, aesthetics, community, and heritage as well.

According to statistics Tourtellot likes to cite, 41 percent of travelers want to visit places that feel authentic, while 39 percent are willing to pay more for travel companies that protect the environment and cultural history. But if Tourtellot is correct, Tahoe doesn’t do much to attract such people.

The article that appeared in the September edition of Traveler was titled, ‘It’s the Lake, Stupid,’ and was a follow-up on an article that appeared in the magazine’s March 2004 edition. The original piece was a ‘destination scorecard’ within which well-traveled panelists judged 115 destinations according to the tenets of geotourism. Tahoe received a score of 60, which placed it in the ‘not so bad’ category – well below the Fjords of Norway but just about even with the Great Wall of China.

As Tourtellot explained, the Tahoe tourism scene will receive a higher score once it offers visitors something more than skiing and gambling.

‘The environmental care is pretty good, maybe even too good by some arguments,’ he said. ‘But the concentration on recreation almost to the exclusion of anything else leaves you with a sort of one-dimensional presentation of the place.’

Tourtellot suggested Tahoe could benefit from telling tales of its past – not only tales of European settlers with their sheep, cross-cut saws and, eventually, casinos, but also stories of the indigenous people who had known the land for thousands of years when the first Europeans arrived.

But if Tahoe should talk more about its history, it should also do more to escape its past. Tourtellot found the remnants of the area’s first tourist boom, the 1960 Olympics, distinctly underwhelming. In his article, he summed up the contradiction between the remnants of the ‘ill-considered’ Olympic-era development and Tahoe’s spectacular setting with the words, ‘faded regional appeal versus potential international treasure.’

He also commented on Tahoe’s rising real estate prices, and the growth of ‘snazzy new ski villages’ that rent more space to franchises than to local businesses. According to Tourtellot, both trends squeeze out residents and lead to a loss of local texture.

‘The enemy of geotourism is sameness,’ he said.

The Response
So what’s unique about Tahoe, and what’s the best way to tell visitors about it? One woman may not have all the answers, but she’s attempting to organize those who do.

This May, Tourtellot spoke at an annual tourism conference hosted by the Strategic Marketing Group, a company based in South Lake Tahoe. On the final night of the event, he challenged attendees to re-market the lake around the priorities of geotourism. That night, a resident of Incline Village named Jacquie Chandler was the only one to step up to the plate. Over the last four months she has begun to put together the group GeoTahoe.

Chandler explained that she feels lucky just to live near Lake Tahoe, and thinks she’s even luckier when she gets the chance to show visitors around the area. She hopes that with GeoTahoe she’ll be able to spread a similar consciousness among the residents of the Tahoe area, and from them to the people who visit.

‘The lake isn’t ours to own, it’s ours to host,’ Chandler said. ‘As people who live here, we should think of ourselves more as camp hosts than entitlement property owners.’

The geotourism charter urges local organizers to bring together the voices of stakeholders throughout a destination area. For Chandler, the possibility of focusing the activities of organizations around the lake toward a common good is one of the main attractions of the geotourism model.

At press time, Chandler was working to create a geotourism menus and maps that will point visitors toward ‘high touch, low impact’ trails, historic sites, restaurants, and other activities rich in Tahoe character. She was also putting together a geo council that will eventually consist of 8 to 12 people who will oversee different aspects of the effort to market Tahoe more sustainably.

One of the geo-councilors is Art George, a member of the Washo tribe that has all but vanished from its ancestral home in the Tahoe basin. Tourtellot emphasized that the Washo could make an important contribution to any geotourism effort.
‘If the Washo do want to (participate) I think it’s a tremendous opportunity to help raise the distinctiveness of Tahoe,’ Tourtellot said. ‘That’s a big empty at Tahoe and I think it’s a big opportunity. But it’s up to the Washo. It’s very important that they be on board about it and doing it in the way that they want.’

Though no specific plans have been made yet, George said he would ‘really like to see’ a Washo camp on the shore of Lake Tahoe this summer. He described the camp as a place where kayakers and boaters could stop and learn about the Washo people and their customs. Though the site might be basic at first, George thought that after a few years the Washo would be able to gather tools to make the site functional.

‘Anything that has to do with educating and bringing awareness and opening (people’s) minds up to something they don’t know, that’s always going to be a plus,’ George said.
But George emphasized that before they take part in any tourism activities, the Washo need to be able to re-establish a presence in the Tahoe Basin.

‘The Washoe people want to return back to our original home sites and be available for people so that they can get more information about who we are and what we’re doing.

As along as there’s permission given we’re going to take care of the land like we have for thousands of years,’ George said. ‘(The land) is the biggest thing that the Indian people have. Sure, you can designate an area for us to go, but do we have good willows there, do we have roots there, do we have food there?’