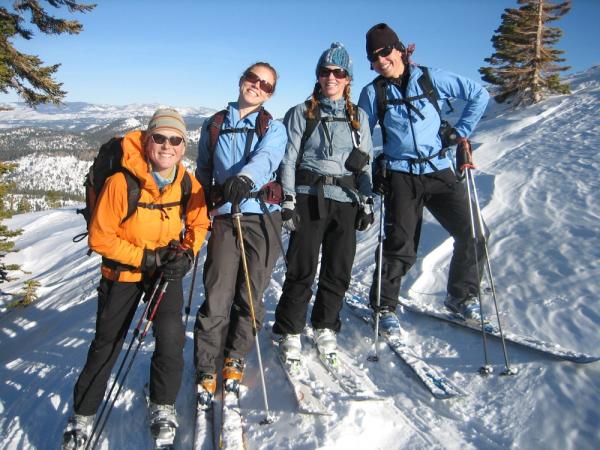 Six women, two significant others, Dave Nettle, and an overwhelmed writer from Moonshine Ink trying to keep up and write it all down. That was the scene last night at Fireside Pizza Co. as Katie Zanto, Nicole DeJonghe, Karen Morey, Sarah Kane, Susie Sutphin, and Sue Duerksen reflected how they all came together for adventures on rock, trail, and mountain — and how five women find one voice for a slide show.

Hint: it involves a lot of potlucks. But all the practice proved to be worth it, as the ladies shared a slide show that included music, charcoal drawings representing early adventures, video, and images of adventures across several disciplines at home and abroad. They even gave the audience a recipe for creating their own adventures in a special part of the slide show entitled ‘Ingredients for Fun.’ Take it from them —  the right adventure is a mix of ‘Fashion,’ which can mean skirts on the trail or feather boas; ‘The Right Guy at the Right Time,’ or bringing friends along for the ride; a willingness and ability to ‘Go For It,’ and push past blood, darkness, or other obstacles; and a desire to ‘Spread the Joy’ of outdoor adventure.

Moonshine Ink (MI): How did you all meet?
Morey: Most of us met Katie through Aaron [Zanto, Katie’s husband]. He likes to set her up on playdates.
Zanto: Aaron was invested in me staying in Tahoe. I signed a 10-year contract [to stay] that was contingent on finding work and female friendship.

MI: Why did you decide this was the year to give a slide show?
Kane: Dave just sent us an email and told us we were doing it.
Nettle: It was an announcement. I felt like this year is the apex of fun and energy for this group.

MI: How did you decide what stories to tell?
Zanto: We’re just five women that know Dave and like to get out and have fun. It was a challenge to come up with a slide show with five people. It shows us all together but it also shows our individual strengths.
Sutphin: There was a long time where we were going, what are we doing? But then — boom, boom, boom, it just all fell into place.
[DeJonghe and Kane arrive from Bar One, where they have been dealing with technical issues.]
DeJonghe: The resolution is crisp and beautiful!
Sutphin: She and Katie have been our technical directors.
Zanto: We almost had a breakdown last night.
DeJonghe: But then we just laughed.
Nettle: Is it going to be a family-friendly slide show?
DeJonghe: Barely. Tom [O’Neill, owner of Bar One] was on the mic saying, ‘now, we will have 10 minutes of skinny-dipping.’ And I got on the mic and said, ‘Oh yeah.’ [In a deep, husky voice.] Then Tom said, ‘— of Dave Nettle.’
Nettle: Oh, no.

MI: There are five of you speaking during the show. Have you rehearsed hand-offs?
Aaron: There were multiple rehearsals.
Morey: It was more putting it together than rehearsing.
DeJonghe: More editing than rehearsing.
Zanto: Creating the vision.

MI: Do you put this much preparation into your outdoor adventures?
Morey: I’d say no.
Sutphin: Usually it’s just texting to ask who’s skiing tomorrow.
Nettle: If there’s snow, they’re out there.
DeJonghe: In putting together the slide show, everyone’s strengths complemented each other. Which is how it goes outdoors.
Nettle: Is there a most embarrassing story? This group is hard to embarrass, so if there is, it must be really bad.
DeJonghe: Not embarrassing really, but once we went to ski the Hall of the Gods and we thought the avalanche danger was too high, so we went and skied something else and named it Trail of the Goddesses.
Morey: There was that time we met that super excited guy.
DeJonghe: Right. There was a line of five girls and he was like, No way! I’m usually out here all alone, and now I’m out here all alone — with five girls!

MI: Is there a spokeswoman or a leader in the group? Does someone take point on each outing or is it more casual?
Morey: We having skiing in common but we also do other things.
Duerksen: We all know each other, but in different ways from different circles.
DeJonghe: Susie’s a great skier and mountain biker but she doesn’t lead climb. I’ve learned so much from her mountain biking. She’ll just say, follow my tire!
Kane: And I’m totally scared of mountain biking, but Susie made me go.
Sutphin: It’s not that I made you go but that you finally felt comfortable enough to try it.
Nettle: And Karen brought impromptu spooning to the group.
DeJonghe: We share similar interests — we all love great rock and mountains and good friends. But we’re all so unique and different that it keeps things interesting. It keeps things spicy. We complement each other.

This group of gals has more adventures in store for the future. Chile, Canada and the Dolomites were put on the table as destinations down the road. There was also mention of the creation of team clothing, possibly a trucker hat with a female skier ripping it emblazoned on the cap. Keep an eye out for those hats in the backcountry — or just look for a group of five women, sometimes in skirts, always wearing smiles.

The Adventure Slide Show Series, sponsored by the Back Country, is in its eighth year. The slide shows take place every Wednesday night through Feb. 10, starting at 7 p.m. in Bar One at Squaw. Read more about next week’s presenter, white water kayaker Shannon Carroll, here. Past speakers include Kip Garre, John Morrison, Dave Vuono, Mike Schwartz, and Todd Offenbacher. 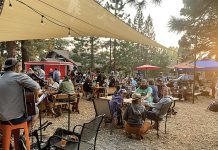