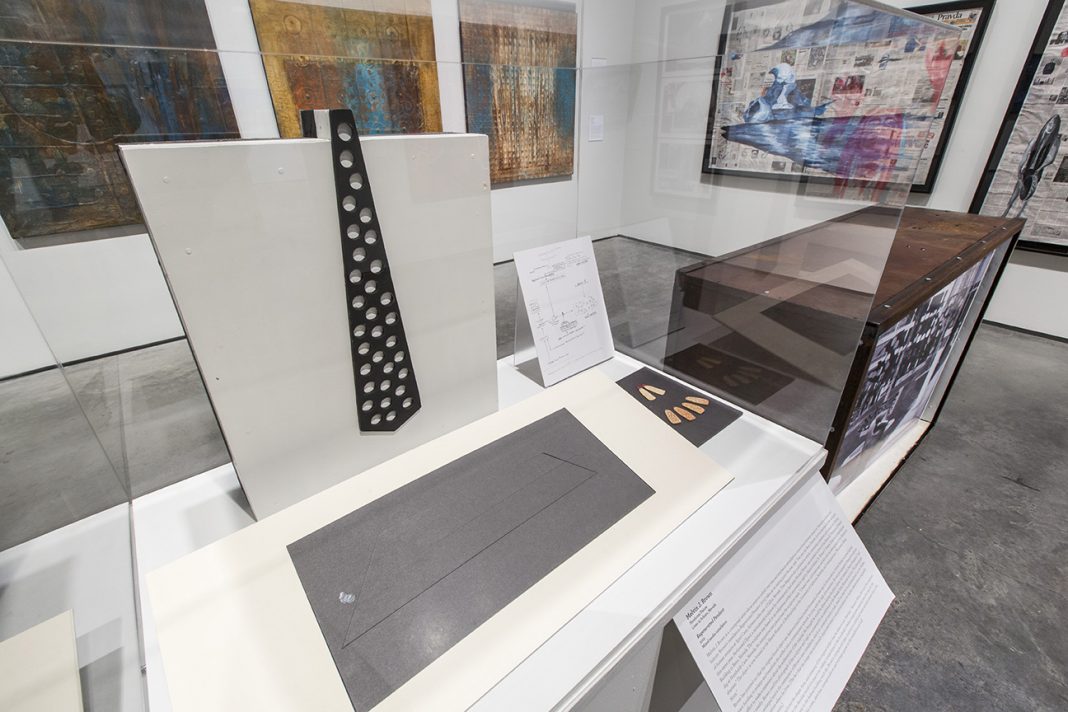 “The Way We Live: American Indian Art of the Great Basin and the Sierra Nevada” opened at the Nevada Museum of Art in November — dovetailing with National Native American Heritage Month – and features the work of 18 contemporary regional artists. Their creations reflect the cultural nuances of artists from several Great Basin nations, including Washo, Paiute, Shoshone, Maidu, and more. “The Way We Live” illustrates both the juxtaposition of the Indian experience against non-Indian life, and the dichotomies among Native American traditions.

One of the more controversial pieces is Shoshone-Paiute artist Melvin Brown’s contribution to the show. “Regenerated Pendant,” is his eye-for-an-eye response to the 1997 installation of the “Perforated Object” sculpture at the new federal courthouse in downtown Reno. That piece, which non-Native American artist Michael Heizer was commissioned to create, actually came to fruition via a fallout over Heizer’s father’s excavation of ancient human skeletal remains in the Humboldt Cave near Fallon, a site believed to be the final resting place of “Spirit Cave Man.” At the core of the conflict are the scientific claims that Spirit Cave Man possessed Caucasoid features and couldn’t have been Indian, versus the Indian belief that the sculptor’s father, Dr. Robert Heizer, had no right to disturb the remains, and that Spirit Cave Man belongs to the Shoshone-Paiute people. Moreover, Heizer’s 1936 excavation and removal of a burial artifact — a fish-shaped bone drilled with 91 quarter-inch holes — from Humboldt Cave was a spiritual taboo that incited an uproar, which continues today.

Taking his inspiration from his father’s “discovery,” Heizer created a steel sculpture riddled with holes that rises like a rusted flank outside the courthouse, a monument to the excavated remains that Native Americans say should not have been disturbed in the first place.

“When Heizer took that artifact, had a replica made, and expanded it to that gigantic size, he created an icon,” Brown explains via phone from his home on the Walker River Paiute Reservation. “You can’t protest it, because that’s an artist and his work. The reason why it can work is because it’s in a whole alien world than what the original artifact was fashioned. When it was fashioned those thousands of years ago, that was a whole different reality … It was a work of art, but it was in his reality; he was working by his rules, and [society] would accommodate it.”

Just beneath the surface of the dispute lies a Native American universal intolerance of the worn-out practice of using non-Native American “experts” to weigh-in on Native culture. Like the rest of Nevada’s American Indian community, Brown was incensed over the removal of Spirit Cave Man, and Heizer’s commercialization of an object that, from the Great Basin Native perspective, was a sacred burial object. Summarily, it equaled a formula for perpetual debate, and an unending cultural divide.

Brown was impelled not so much to bridge that gap, but to create art that serves as a rebuttal to non-Native American propaganda. At first glance, Brown’s “Regenerated Pendant” appears to be an innocuous wooden necktie — an accoutrement symbolic of Anglo success — except that this tie is full of holes, too.

“The shape of the necktie is so powerful,” says Brown. “But you put the holes into it, now you have something that’s a Native American statement, from the Great Basin.”

With the Great Basin Native and American Indian belief that mortals should respect the intangible and the spiritual — and that artifacts and remains be undisturbed and returned — Brown insists that Native Americans will forever refute the dogmatic, scientific rhetoric, and that silence is by no means an adequate response.

“That’s what I wanted bring to the public’s attention. [This case] was very important, but if no [Native] was to say anything, it’s sort of an implied consent – a spiritual implied consent.”