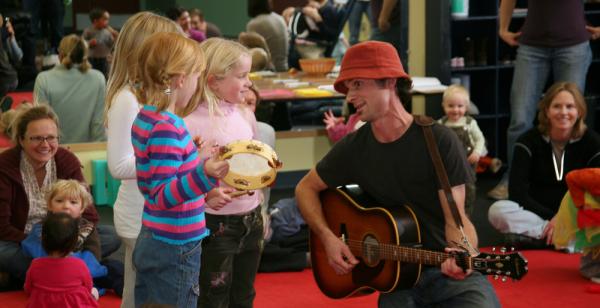 When Todd Wees got laid off from his job as a project manager with JMA Ventures last year, little did he know that in a matter of months he would be strumming his guitar and singing children’s songs — and actually getting paid for it.

Wees, a resident of Truckee, managed to turn what some would consider a disaster into good fortune. The 36-year-old father of two, who didn’t even pick up a guitar until age 26 or start performing before an audience until two years ago, has begun a new career as a professional family entertainer. With gigs playing music at local events and preschools, Wees is getting ready to take his new profession to the next level with the release of his first CD, ‘My Next Birthday,’ this month.

Wees, who is originally from Canada, has always had a passion for music. As a kid, his older brother introduced him to ska and punk rock. While attending college in San Diego, he and his girlfriend (now wife), Janet, enjoyed going to see live music together like Primus, Radiohead, and English Beat. But until Janet gave him a guitar for his 26th birthday, Wees had never even picked up an instrument. He took some lessons from a 17-year-old who worked at a guitar shop, and then taught himself the rest. It wasn’t until seven years later, when he and Janet were at the Trio Wine Bar & Bistro during open mic night, that he got up in front of a crowd and performed. He had to borrow a guitar.

But Wees was hooked. Next he performed at Truckee Book & Bean’s open mic night, and kept returning to Trio, too. At first he played cover tunes — Wilco, Ryan Adams, and Johnny Cash. Then he started writing his own songs.

‘I wanted to get out and play because I liked writing songs,’ Wees said. ‘I’m a big fan of singer/songwriters — my favorite artist is [Wilco frontman] Jeff Tweedy. It’s really fun to create something that people will like.’

Wees formed an alt-country cover band called Uncle Rico that played a few shows at the Cottonwood. But the songs he was writing were all children’s songs.

‘I’m kind of a big kid at heart anyways. I would drop my daughter off at preschool and I liked to interact with the kids, to get down on their level,’ Wees said. ‘The songs were coming out of me pretty quickly and I enjoyed writing them.’

Wees’s big break came one day last winter when he was singing at home in front of a group of friends, which happened to include Caroline Ross, director of the Squaw Valley Village Neighborhood Company. She invited him to perform at the Village’s Easter celebrations. It was his first paying gig, and a turning point.

‘Before, I thought I should find a nine-to-five job, but I was letting that idea go more,’ said Wees, who stays at home two days a week with his kids while his wife works full-time. ‘After that show, my focus was on music.’

That summer, the jobs started flowing in. He performed at the KidZone’s Truckee Thursdays booth, the Tahoe Mountain Club’s July 5 party at Old Greenwood, Squaw’s Wild, Wild West Weekend at High Camp, the Magpie Festival in Sierraville, and Martis Camp over Labor Day.

‘I’ve always kind of had a daydream that I would play live music in front of crowds, but I never thought it would be in a kid form,’ said Wees, who describes his acoustic sound as ‘Americana for kids.’ His music has also been called folk and compared to Jack Johnson.

In August, another opportunity arose. The music teacher at Pathways to Learning, the preschool Wees’s 4-year-old daughter Cameron attends, left. The school asked him to fill in. He now performs at the school every Wednesday for 45 minutes, and recently started playing at Discovery Preschool and the Truckee State Preschool.

‘I really enjoy it, and the kids really enjoy it,’ he said. ‘I love seeing the looks in their eyes and where it will go. You never know — some kids will have requests, and some will come up and start strumming on my guitar.’

This led Wees to develop the Todd Wees Music Experience, a 50-minute family class he leads at the Family Resource Center on Tuesdays and Wednesdays. He sings his own songs as well as those by Bob Marley, Raffi, and other children artists, and encourages kids and parents to participate by playing shakers and drums and dancing. Wees feels that there are tremendous benefits to parents and children enjoying music together.

‘We tend to separate what parents do and kids do,’ he said. ‘To do music together and see each other singing, it gives kids confidence to try new things and sing.’

He’s also seen in his own children that singing has helped them develop new vocabulary and given them a better understanding of the meaning of words and rhyming.

‘On a lot of levels it’s good for their brain besides just reading to them every night,’ Wees said.

As his music career progressed, Wees started thinking of expanding his reach beyond Truckee by making a CD. Fate knocked on his door, literally, when a guy who came to buy a highchair that Wees had advertised on craigslist turned out to be a San Francisco engineer and producer with his own studio, Decibel Recordings. The two became friends and Wees ended up recording his album, ‘My Next Birthday,’ at the studio. The album, which will be out January 15, features 10 songs that Wees wrote with names like ‘I’m Bored,’ ‘The Ketchup Song,’ and ‘Monkeys 3,2,1,’ all inspired by his own kids. He even designed the cover.

Wees is happy with how his career path has unfolded, no matter the strange twists and turns.

‘I really enjoyed working at JMA and Homewood, but this is a lot more satisfying on a lot of levels — creativity, meeting new people, spending more time with my kids,’ he said. ‘And the sessions with the kids — even though they’re not my kids, I feel really proud they’re getting out there and having fun and I’m sharing the experience with them.’

~ Todd Wees will be performing on February 20 at the Olympic Village Inn for Squaw’s Kid-o-Rama and at the KidZone on March 20. To find out more information about upcoming shows or to buy his CD, visit toddwees.com or truckeemonkey.blogspot.com.

From Corporate Job to Children’s Music
Sports & Outdoors
All Day