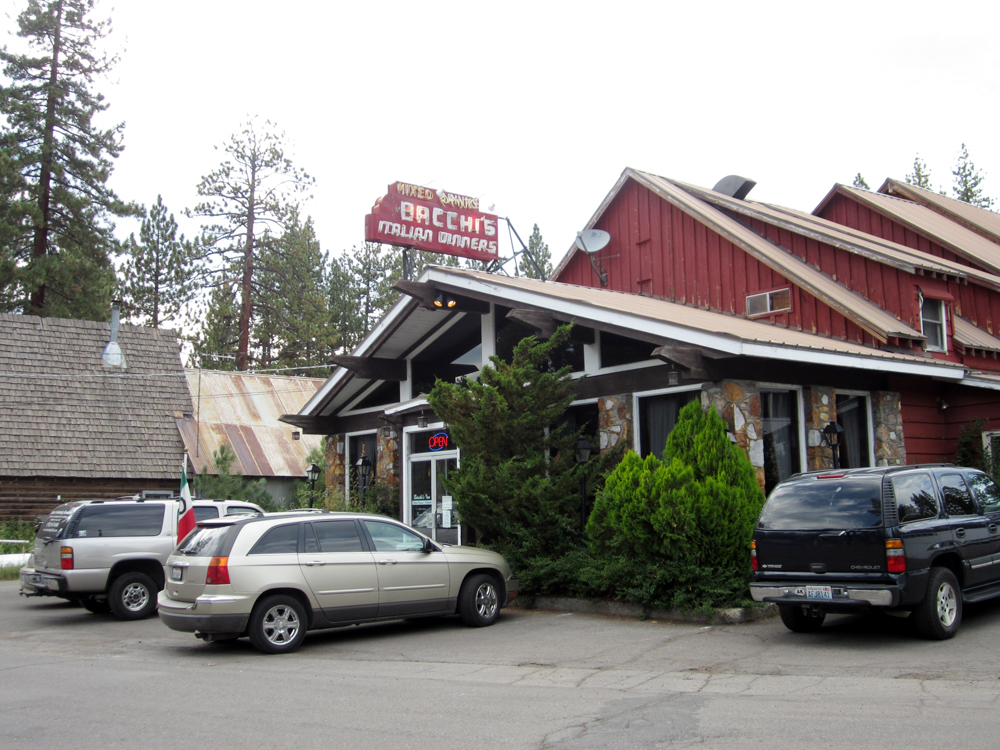 The Tahoe/Truckee region is home to an impressive collection of restaurants that have been open for decades, and these long-time survivors deserve to be known. Keeping the business in the family, maintaining consistency, catering to both locals and tourists, and serving timeless cuisine are some contributing factors to their success. The restaurant owners will tell you it’s been no easy feat, but whatever their reasoning — whether to pass on a thriving family business to the fourth generation, or simply because their popularity is still increasing years after opening — they’re keeping their doors open. Organized by region (Tahoe City, Truckee, Kings Beach, West Shore, and Incline Village), we present the oldest Tahoe restaurants owned by the same families. With 262 years of business between the five of them, these three Italian and two breakfast/lunch restaurants serve up great food with a side order of history.

Back when the main road through Tahoe City wound through Lake Forest, George and Josephine Bacchi started delivering fresh produce to Tahoe from the Sacramento Valley. Josephine quickly made a name for herself as a cook, and many of the wealthy families regularly asked her to cook them traditional Italian food. With encouragement from Laura Knight (owner of Vikingsholm), the Bacchis built a cabin with wood from the neighboring lumber mill owned by Bob Watson and began operating a fruit stand and restaurant on Lake Forest Road. It was in 1932 that Bacchi’s Inn, one of the oldest (if not the oldest) restaurants in Tahoe, was born.

From the early days of Josephine serving her Sunday special of homemade chicken ravioli for $1, Bacchi’s has retained much of its original character. “This is a traditional Italian restaurant; if you go to dinner at an Italian family’s house, you’d eat like you would here,” said Bill Hunter, grandson of Josephine and George, and owner since 1978. “Back then, if you didn’t like what she was serving, you didn’t eat.” The business has suffered over recent years, partially due to the creation of North Lake Boulevard in the early 1950s, turning Bacchi’s once-prime location into a spot that many don’t even know exists. Hunter hopes that their homemade sauces, minestrone soup, and chicken ravioli (he and his son still make all of it by hand), and family-oriented portions and prices keep people coming. “We’ve fed the most famous and infamous in the gangster world,” Hunter said, sharing that Bacchi’s was a regular Mafioso hangout. Though it’s off the beaten path and is only open on weekends, Bacchi’s long lifespan and rich culinary and social history makes it an intriguing Tahoe establishment.

Historic photos of the region, oil lanterns, a toy train set, and a sign that reads “Speak yer mind but ride a fast horse” line the walls and ceilings of Wagon Train. More than a breakfast joint, it preserves the history of Truckee and the Smart family. Reginald E. Smart purchased the Goodfellow Grotto in 1947; the location now houses Cabona’s, but the inlaid cement coffee cup on the sidewalk, done by Smart, hints at its former life. In the ’60s Smart renamed the restaurant Wagon Train and in 1977, when his son and current owner/chef Brian Smart got out of the Navy, Wagon Train moved down the strip to its current location, and Brian took over his dad’s business. “There were three 24-hour coffee shops on this strip back when I-80 went through town,” Brian said. “As a coffee shop, we always get a piece of everything that goes on in the community … weddings, funerals, court dates, we get somebody that comes in.”

This allure of a traditional coffee house may have helped Wagon Train stay in business for the past 67 years. It could also be their loyal customer base. “We stay consistent and maintain a theme that makes locals feel like it’s their downtown,” said Brian’s wife and right-hand woman, Siobhan Smart. Countless license plates line the walls from all 50 states, given to the restaurant by customers over the years. Or maybe the coffee shop’s survival is due to consistency — the first time the menu was changed since 1947 was in 2010, after Reginald Smart passed away. They’ve served the same coffee brand for 67 years; they tried to change coffee brands once, but their clientele was incredibly displeased.

Walk into Lanza’s in Kings Beach and you instantly feel like you’re the newest member of the big Italian family that owns the restaurant. Joe Lanza, who started the business 40 years ago with his mom, the infamous Mama Lanza, can often be found chatting with regulars or having dinner with his family; his stepson, Justin Garcia, has taken over managing duties for the past 15 years. In 1972, Joe moved to Tahoe with extensive restaurant experience under his belt, and after finding minimal employment prospects in the area, he decided to open an Italian restaurant. Catching wind that Mama Riolo, owner of the Riolo Club (now home to Lanza’s), wanted to sell her restaurant, Joe began negotiations. Once Mama Lanza entered the picture two years later and gave Mama Riolo additional confidence that her restaurant would be in good hands, in 1974 the mama-son duo got to work establishing Lanza’s as the thriving restaurant it is today. “If it weren’t for two Italian ladies, I never would have made it,” Joe said. “And I’ve always said, ‘Have a good time and eat a good dinner.’”

Lanza’s lumaconi, a special menu item invented by Joe’s grandfather in the Italian military, features a jumbo pasta shell stuffed with ground beef, cheese, herbs, spinach, and egg, and topped with meat sauce and cheese. This is the stuff that keeps people coming back for decades. “All the recipes have stayed consistent, and consistency is one of our strongest attributes,” Garcia said. “It’s like coming into your grandma’s living room because you see all the same people, customers and staff.” Garcia noted that they also introduced gluten-free items to the menu recently.

Mama Lanza passed away in 2012, but her amazing cooking and vibrant persona will be engrained into the character of the restaurant forever. “She’d come and have dinner and I swear to God people would start whispering, ‘There’s Mama,’ or they’d get up and go talk to her,” Garcia said. “She was sort of a rock star in North Lake, this tiny 5-foot woman.”

Known today as a bakery and gourmet food shop, Tahoe House was originally a dinner house, started in 1977 by Peter and Helen Vogt, a husband and wife from Switzerland. Unsatisfied with the breads and desserts available, Peter began making those items in-house for their dinner customers. The baking portion of the business continued to expand, and by the ’90s Peter and Helen were joined by their daughters, Barbara and Caroline, and began selling their baked goods at up to 15 farmers markets a week. As business and demand for their specialty baked goods and gourmet treats grew, the family saw their future; in 2001 they stopped serving dinner and transitioned to the current day Tahoe House.

Barbara inherited her father’s love for working in the kitchen, and he taught her all he knows; he also taught a family friend, who the sisters consider a brother, J.B. Joynt, and he’s become an instrumental baker and team member at Tahoe House. The Vogt parents are semi-retired and help out, but for the most part it’s run by the two daughters, Barbara in the back and Caroline in the front of the house. In addition to receiving fame for its sweet and savory baked goods, Tahoe House has long been known for its coffee. Pressure-brewed by the cup with a Swiss machine, the Vogts’ coffee is highly sought after. “These back-country skiers would come by in the mornings [in the early ’90s] before we were open, when my mom was doing the books, and they would ask her for a cup of that great coffee,” Caroline said. In fact, one of the skiers she mentioned was sitting on a nearby couch: Wolf Schaefer remembers how their coffee got his skiing days started right, and is still a regular customer today.

Andrea Azzara Gitchell still has people come to eat at her restaurant in Incline Village that claim to be among the first-ever customers at her family’s original Azzara’s restaurant, opened in 1956 in Stanton, Calif. Andrea and her husband, Cord Gitchell, took over the Italian restaurant in 2007 from Andrea’s parents, Sam and Denise, who opened the restaurant in 1978 when the Raley’s plaza was built. With the recipes and cooking experience he learned from his mother, Sam ran the kitchen for years, serving items like his version of cannelloni: a fresh crepe rolled with ground meat, spinach, onion, and topped with béchamel sauce. Even today, customers that have traveled to Italy say that Azzara’s cannelloni are better than those from the homeland.

After working alongside her dad for years and getting a bachelor’s in culinary arts, Andrea began working at the Hyatt in Incline, knowing that someday she would take over her family’s business. “The summer of 2007, my dad called me and said, ‘I can’t do another Fourth of July weekend.’” Though she hadn’t felt timing was right, she and Cord decided to take over Azzara’s, and are very glad they did (2013 was their best year). “This restaurant was 30 years old when we took it over, and we want to do another 30, and hopefully one of our three boys will take over,” Cord shared. Though they have kept many favorite menu items — like lasagna, linguini con vongole (clams), and their homemade bleu cheese dressing — and Sam Azzara is still at the restaurant most nights, the second generation owners are expanding their catering and take out services, adding more gluten-free items to the menu, and remodeling the dining room this spring for a more rustic feel; they plan to keep the bar/lounge side open during the work.