Home Sections News Do We Love Danger Too Much? 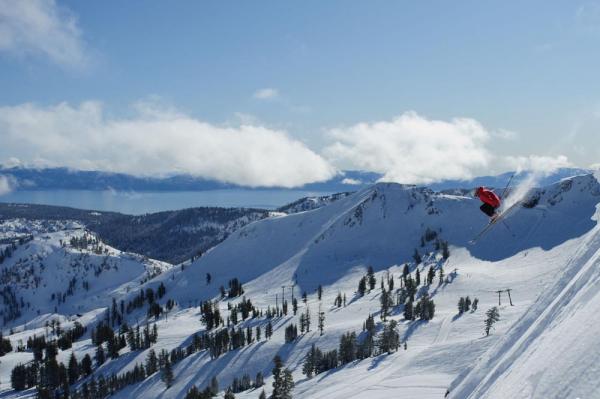 It happens every year. Somebody who everybody knows, some shining star, some sparkle of light and energy who is living life to the fullest, dies in a tragic accident. They were doing what they love: jumping off a cliff, skiing the biggest powder day of the year, climbing a challenging peak. They were testing limits and living life to the fullest – until it was over. We mourn the loss and celebrate the life, then move on to finish our own lives. But one question lingers: Do our mountain adventurers have too much love of danger or do they just have a love of life?

Extreme skier and ski movie cinematographer Steven Siig says, ‘It’s not a matter of danger, but a sense of excitement and adventure. My best friend was killed in Alaska. He didn’t have a death wish, he had a life wish. He wanted to ski something that nobody else could ski. That is where he needed to go to fully experience his life.’

Michelle Parker, professional free skier and lifelong Squaw Valley resident, says, ‘I don’t look at what I do as something that is dangerous. It is my passion. I feel more comfortable on my skis than on my feet. I know there is risk; that is what I am looking for. I love the feeling of being at the top of the line being nervous and then being at the bottom and having finished it. There comes a time when someone must risk something or sit forever with one’s dreams.’

The mountains attract risk takers. They come to ski the steeps in the winter, and bomb their bikes down gnarly trails in the summer.

‘The lure of the mountains bring a certain type of personality,’ says Siig. ‘It’s the type of people who come here.’
Young people move here to feel alive and to push their limits, and they soon make friends with other people who feel the same way.

‘Like-minded people migrate here together, to a place where they can find adventure and nature,’ says psychologist Amy Vail.

Added to the mix is a powerful cultural message that rewards those who are willing to risk the most and succeed. Whoever can jump further, go faster, fly higher gets the prize. A whole slew of extreme sports and contests have sprouted up to reward the risk taker…or at least a few of the risk takers. Vail says, ‘In our culture we reward people for what they are doing, instead of who they are.’ She says that young thrill seekers also have an ‘immortality complex. They don’t think bad things will happen to them.’

Much of the danger is caused by the competitive urge to win or at least beat your friends. Emergency room nurse and Tahoe Nordic Search and Rescue member Paul Cushing says that from his experience you get hurt when you ‘try to keep up with people who are faster and stronger than you. Pushing yourself to keep up with your friends, to show that you can do it.’ Siig adds, ‘When I was jumping off a cliff 15 years ago I was partly doing it to impress my bros.’

This impressing-the-buddies mentality can be especially dangerous when it comes to skiing in avalanche-prone areas. Get four experienced skiers, snowboarders or snowmobiliers together on a blue bird day and then watch what happens when they approach a high avalanche zone. The group gets excited about the beauty of the run and may discount the danger. Anyone in the group who is concerned about the danger is unlikely to speak up because either they don’t want to be considered wimpy, or they believe the fact that nobody else has objected to the route must mean it’s safe. Of course, it is not just avalanches that bring out bad group decisions. Put four teenage boys in a car with a little alcohol and there is a pretty good chance that reckless driving will occur.

Our love of danger could also be partly based on a reaction to the over-sanitized, risk-free world we have tried to develop. Our government tries to protect us from any possible harm with the Pure Food and Drug Act, seatbelt and helmet laws, Occupational Health and Safety laws, and consumer product safety and labeling laws. And then after all those rules, if any business still manages to sell something that some idiot finds a way to hurt themselves with, lawyers are ready to jump in with a lawsuit for millions of dollars. Now fast food restaurants have to warn customers that hot beverages might be hot, Southwest Airlines’ bags of peanuts proclaim, ‘Warning, contains peanuts’ and Superman costumes now pronounce, ‘Wearing of this garment does not enable you to fly.’ It’s no wonder that extreme skier Kristin Ulmer in the book, ‘The Extreme Game,’ says that extreme sports are a reaction to the ‘scaredy-cat culture.’ It’s a way to experience life away from the straitjacket of our super safe lives.

Psychiatrist, extreme skier and author of ‘Squallywood,’ Rob Gaffney believes that thrill-seeking is in our DNA. He says that studies have shown that ‘if thrill-seekers have access to thrill-seeking activity once a week or more, they are more likely to rate their quality of life higher.’ Some people are physical thrill seekers, they seek their kicks on a ski hill or by jumping out of a plane, and then there are experiential thrill-seekers who go for perilous traveling, dangerous careers or devastating drugs.
Is thrill-seeking in people’s genes? Some research indicates it is. According to the ‘Encyclopedia of Death and Dying,’ a 1998 UCLA study reports that ‘two types of mutant genes underlie compulsive novelty-seeking behaviors. The researchers claimed that 30 percent of the population is born with one of the thrill-seeking genes, and 20 percent with both.’ Researchers from Vanderbilt University found that some people have fewer dopamine ‘autoreceptors’ which help the brain to stop producing ‘dopamine when stimulating events occur. In thrill-seekers, free-spenders and those who are impulsive, the regulatory cycle is inhibited…meaning that the thrill is all the more thrilling, the reward all the more rewarding – thus making the person want to do it again.’ (From ‘Thrill Seeking Brains and the People Who Have Them,’ by Dr. Summer Johnson).

While the young adventurers push their limits, the older adventurer tries to strike a balance between the love for adventure and knowledge of the dangers. Paul Cushing understands that concept well. ‘We all take risks and we are aware of this risk. I push the limits sometimes myself.’ But you take ‘less risks as you get older, and especially after you have kids. I was with some friends bagging peaks in the high Sierra, and when we got to a point where it went from Class 3 to Class 4, we realized we would need ropes. We then knew that we had reached the Married Man Point.’ This is the place where the younger, single guy keeps going, and the married guy over 40 turns around. ‘Now the most important part of the trip is to get home in one piece,’ Cushing says.

What happens when the wild adventurer becomes a parent? Rob Gaffney expresses his concern. ‘I have an 8-year-old son. He wants to do things that are more difficult after reading my book.’ (‘Squallywood,’ in its second edition, provides details on some of the most challenging lines at Squaw Valley). ‘I’m really trying to rein him in. I think about this all the time. I worry about the kids,’ Gaffney says.

Siig says, ‘I am more protective of my kids than I am of myself. I am trying to get over protecting them too much. I want to let them go, but I know too much about the consequences.’

It’s a fine line. How do we encourage kids to explore and be athletic without causing injury? Kids will be kids, which means they have lots of guts and just enough skill to get themselves into trouble, and not necessarily enough rational thinking ability to get themselves out. While children used to get injured falling out of trees, now it is more likely to happen in structured activities: racing down a hill or getting big air. Karen Roske, who teaches young children at Squaw Valley, says that, ‘The drive comes from the parents. Our culture embraces pushing whatever activity the kids are in to the next level. It’s not just soccer, it’s got to be club soccer. Not just ballet, but dance competition.’

‘Parents are living vicariously through our kids,’ says Vail, the psychologist. ‘We push them to do lots of activities, when perhaps you should listen to who your kid is and give them the opportunity to be themselves.’

Even if being themselves is not being a ski racer.

So what is the answer? Live life on the edge or with caution? Thoreau said, ‘I went to the woods because I wished to live deliberately, to front only the essential facts of life and see if I could learn what it had to teach, and not, when I came to die, discover that I had not lived…I wanted to live deep, and suck out all the marrow of life.’ Here in one of the most beautiful places on earth, we have nearly boundless opportunities to suck the marrow out of life. The trick is to live life with wild abandon, while still remembering the most important thing is to come home in one piece.

~ Tim Hauserman wrote the guidebook to the Tahoe Rim Trail as well as ‘Monsters in the Woods: Backpacking with Children’ and teaches kids and adults at Tahoe Cross-Country Ski Area. He must be missing that dopamine gene because he is a chicken.

Do We Love Danger Too Much?
Arts & Culture
All Day

Do We Love Danger Too Much?
Sports & Outdoors / Wellness