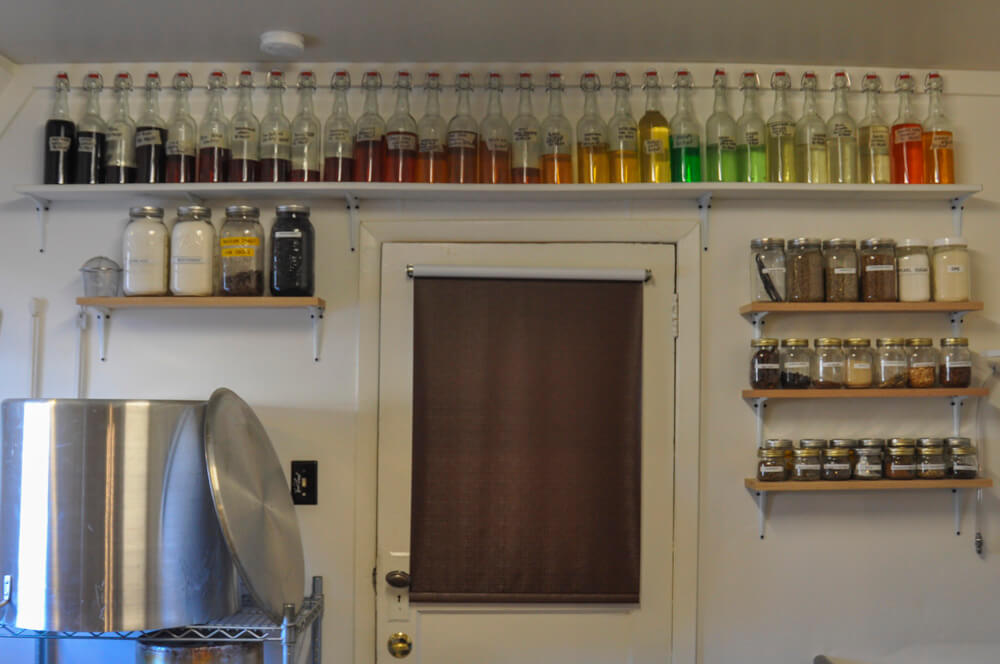 George Racz moved from New York City to open the Las Vegas Distillery in 2011. When he arrived, he learned that Nevada hadn’t seen a legal distillery since 1919 despite the lifting of Prohibition in 1933. What do you do when the business you want to open isn’t legal? You change the law.

Thanks to two years of hard work by Racz and his fellow distillers, the bill legalizing distilleries passed the Nevada legislature in 2013. Aside from the southern Las Vegas Distillery, the four other Silver State distilleries are located in Northern Nevada. Each distillery’s identity and products are distinct, yet they’re all owned by native Nevadans working together to build an industry of authentic spirits that represent their state.

The Depot Craft Brewery Distillery is the first of its kind in Nevada. Housed in the Fourth Street building that was Reno’s train station from 1910 to 1937, The Depot serves handcrafted food with house brews and spirits like a house gin and a Silver Corn Whiskey, made from grain from fellow distillery Frey Ranch. Come July, The Depot will release its Biggest Little Bourbon, a small-barrel bourbon made in 5 and 10 gallon barrels versus the usual 52 gallon.

Open since New Year’s Eve, The Depot is run by head brewer, distiller, and owner Brandon Wright, owner and number-cruncher Chris Shanks, and front-of-house manager Justin Stafford. After several years of working as a brewery consultant in San Diego, Wright moved back to his hometown of Reno in 2013 to pursue a longtime dream of starting a brewery business with his high school friend, Shanks.

“We really thought this was a unique thing to have under one roof,” Wright said. “It’s a great opportunity for us, the makers of anything grain-based.”

Wright customized The Depot’s still system based on a much larger one at a Washington distillery. The Depot’s 1,000-liter hybrid still is able to emulate different techniques, such as operating as a single-unit pot still or letting the vapors travel from the pot to the reflux column. Most of the spirits are distilled twice, which Wright says creates “a little more of a polished distillate.”

When their plans to open a brewery synced with the legalization of Nevada distilleries, it became an enticing opportunity to further develop their business model.

“I didn’t know if I wanted a traditional brew pub, but we needed a destination to draw people to stay a while,” Wright said. “Chris and I joke that we built a monster and had no idea we were doing it … It takes a lot of hours but at the end of the day I’m so proud of what we’re doing.”

From Grain to Glass

Seven miles outside of Fallon sits the 1,200-acre Frey Ranch, operated by the Frey family since 1918 to provide the region with rye, wheat, barley, corn, and alfalfa. Over the past nine years, Colby Frey and his wife, Ashley, have been expanding business beyond growing grains. They planted their first grape vines in 2001 to bring a value-added product to their farm, and under the name Churchill Vineyards began crafting white wines like riesling, gewürztraminer, sémillon, and chardonnay.

“We asked ourselves, ‘What else can we do?’” Colby said. “We’ve always grown the grain, and I always sort of wanted to try distilling.”

With an experimental distilling license, they started using their grains to distill vodka, gin, and whiskey in 2006. Frey Ranch currently has a four-grain vodka, VSOP brandy (VSOP means it aged for 5 years), and gin in the works. Its primary focus will be whiskey once it has barrel-aged for four to five years. The ranch even supplies grain to other distillers and brewers in Northern Nevada.

Though new to distilling, the Freys knew exactly what they wanted. That conviction was likely how they contracted with Vendome Copper & Brass Works — the biggest still builder in the country, responsible for the stills of Jim Beam, Wild Turkey, and Jack Daniels.

“Many people ask us how we got them to call us back,” Colby said. “We showed up on their doorstep in Kentucky and said, ‘We have money and a plan.’ Then they took us seriously.”

The continuous three-still system is unlike anything Vendrome Copper has made in its century of business. The vodka column removes all but 2 percent of the impurities from the alcohol, as vodka must be at least 95 percent alcohol to meet federal regulations. The Freys also redistill in the 550-gallon pot still after distilling through the continuous still, which Colby said results in more refined flavors.

“Our whiskey is made from grain [my family has] grown in Nevada since the 1850s,” said Colby. “We leave a little grain flavor in it because that’s who we are, grain farmers.”

If everything was better back in the day, the guys behind Seven Troughs Distillery in Sparks are on to something. After selling its first bottle of Recession Proof Moonshine in November 2013, Seven Troughs has expanded to distill an 80 and 125 proof moonshine, rum, and vodka, and the currently barrel-aging bourbon. The Seven Troughs team bases all of its spirits on traditional recipes and methods dating back to the 19th century.

“It’s inefficient but it creates distinctive flavors and preserves the early American whiskey tradition … The old guys knew how to make whiskey,” said Tom Adams, co-owner and developer of the distillery’s recipes and processes. “With the craft distilling movement, America is learning how to drink again and tasting new flavors.”

Adams has extensively researched the pre-1875 methods of distilling, and designed a set-up to match. Relying on boiling water to maintain heat, the mash ferments in barrels smaller than standard fermenting tanks, and the 150-gallon, fire-heated pot still houses the evaporation process. This results in historical reproductions of pioneer spirits like the 1862 Old Commissary Whiskey, crafted for Fort Ruby and the Pony Express. Seven Troughs also grows its own malt, an Irish technique from the 1100s.

With a lifelong interest in distilling, Adams connected with Troy Sullivan, M.D., who shares his passion for the industry. The duo structured the business so they can both work their day jobs — Adams is an engineer and Sullivan a surgeon — while their small staff runs daily operations.

“Troy and I went out to a ghost town in the middle of the Nevada outback called Seven Troughs,” Adams said. “It’s wildly unique to Nevada, almost like the state’s secret handshake, and that name reflected a bit of Nevada’s history and where it’s going. We’re part of an evolving movement.”

The Flavors of Verdi

Verdi Local Distillery opened last August and has made a name for itself with its apple cinnamon whiskey, a spirit inspired by Fireball Whiskey but made with half the sugar and none of the chemicals. What began in 2010 as a hobby in a garage, Verdi Local was created by husband and wife duo Jeremy and Katey Baumann, of Colfax and Verdi respectively.

“Where spirits are right now is where microbrewers were 10 years ago,” said Katey, defying the industry’s gender norms as the primary distiller. “There were the standards but then people started coming out with apricot and watermelon beers. That’s what we want to do with spirits.”

In October 2013 the couple bought the building they had always had their eyes on. With rustic wood paneling and a cowboy silhouette on the garage, the small building “just looked like a place you’d make whiskey,” according to Jeremy. And at 744 square feet, Verdi Local is currently going for the Guinness Book of World Records accolade of smallest distillery.

Exposing the craft spirits community to creative flavors all made with the real ingredients, Verdi Local goes where few spirit-makers go. From the apple cinnamon whiskey made with apple juice and cinnamon sticks, the couple conceptualizes tastes like black licorice whiskey, pine whiskey, garlic whiskey (for Bloody Marys), and orange peel gin.

“We want people to realize what Verdi is. It’s not an extension of Truckee or Reno, it’s kind of like our whiskey — right in the middle,” Jeremy said. “We have a responsibility by having a business here to show Verdi in a positive light and show what this town can really be.”